Police have determined that the DCI International building that burned down in Newberg, Oregon was caused by an arsonist, whom they believe perished in the fire. 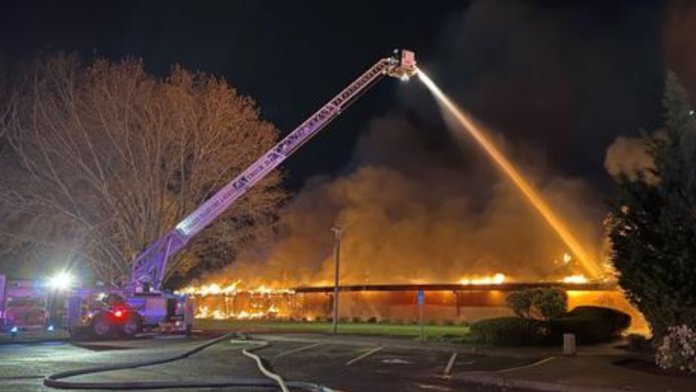 Investigators have determined the cause of the DCI International structure fire at 305 N. Springbrook Rd. to be an arson, committed by Ricardo Cornejo Garcia (46 y/o, transient male).  The structure is believed to have been selected at random by Garcia who was suffering from issues of mental health, intoxication, or a combination of both.

A timeline and details of events are as follows:

At 2:00am on 4/10/2022, the 911 center received a call from a male stating they were having a medical issue and claimed to be at the “garden center” of Fred Meyer in Newberg.  EMS was dispatched, but when the male made unusual statements about “vampires” being after him, police officers were also dispatched due to the suspicious circumstances of the call.  The male caller then told the call-taker that he was “Going to start a fire.”

Officers did not locate anyone at the location the caller initially stated they were at, and instead observed smoke coming from an area across the road from Fred Meyer to the west.  Officers then discovered the DCI building was on fire and summoned fire personnel from Tualatin Valley Fire & Rescue as officers continued to search for the male who initiated the call.

The entire DCI building was quickly overcome with fire, preventing any first responders from searching the inside of the building. The search was further delayed for several days due to the extreme hazards left behind at the collapsed structure.

While waiting for proper excavating equipment to arrive at the fire scene, NDPD began to piece together a criminal investigation. It was determined the name originally given by the suspicious caller to be an alias for a wanted subject named Ricardo Garcia.  Due to recent interactions with Garcia, investigators were able to trace recent appearances of him at PNMC and the YCAP shelter in Newberg.  Recent video footage of Garcia closely matched footage of a subject near the DCI building prior to the fire, making Garcia a person of interest for the crime.

On 4/18/2022, investigators located a deceased male among the rubble of the burned building.  After several layers of verification, including medical records and contact with family, the deceased was positively identified as Ricardo Garcia.  The cause of death was determined to be smoke inhalation.

It is believed that Garcia, while in mental health crisis, may have perceived that he was at the Fred Meyer Garden Center, prompting him to give the wrong location during his initial call.  He then forced his way into the DCI building and for unknown reasons chose to set the building on fire from the inside, resulting in the total loss of the 33,000 square foot structure, and his own death.

This case can only be summarized as an unfortunate tragedy, stemming from the underlying behavioral health issues affecting so many Oregonians every day.  Our thoughts go out to the family of Mr. Garcia and to all the people negatively impacted at the DCI company.