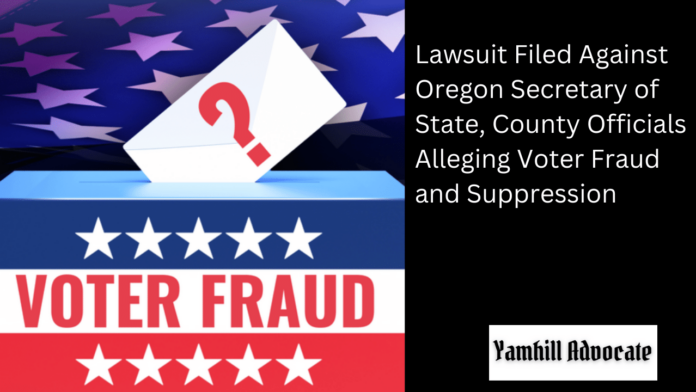 The lawsuit cites a number of examples of what the plaintiffs believe to be evidence for voter fraud and suppression, and also references the 2,000 Mules documentary film produced by Dinesh D’Souza that was released earlier this year. The lawsuit asserts that, as per claims made in the documentary, that Oregon has criminals who operate ‘mule rings’ that engage in ballot harvesting in Portland and Eugene with the intention of committing voter fraud.

The lawsuit also claims that Oregon election officials are manipulating the ballot data entered into the computerized databases to alter the outcome of elections.

Another claim made by the lawsuit is that an unusually high number of voters — as high as 85 voters — are registered at the same addresses, some of which are abandoned homes which no one lives in, and that many voter registrations are tied to locations that do not exist as residences such as vacant lots, vacant buildings, supermarket parking lots and street corners. The lawsuit alleges that laws created by Democrat politicians, such as House Bill 2681 and House Bill 3291, are designed to create phantom voters and make it easier for election fraud to occur and that this has the effect of disenfranchising legitimate voters.

The plaintiffs of the lawsuit are:

Marc Thielman is the former Superintendent of Alsea School District and was a candidate for the Republican nomination for Governor in 2022.Mr. Thielman is registered to vote and lives in Lane County.

Ben Edtl is the founder of Free Oregon, anon-partisan public interest organization dedicated to defending and restoring civil rights in Oregon. Mr.Edtl is the Republican Candidate for State Senate District19 which includes portions of has Clackamas, Multnomah, and Washington Counties. Mr. Edtl is registered to vote and lives in Washington County.

Janice Dysinger is a long-time election integrity advocate who is registered to vote and resides in Multnomah County. Mrs. Dysinger is co-chair of the Election Integrity Committee of the Oregon Republican Party.

Don Powers is a businessman and co-chair of the Election Integrity Committee of the Oregon Republican Party with Janice Dysinger. Mr. Powers is registered to vote and resides in Clackamas County.

Chuck Wiese is a retired meteorologist and airline pilot. Mr. Weise has personal experience of how vulnerable the Oregon’s voting system is to people who want to cast fraudulent ballots. Mr. Weise is registered to vote and lives in Washington County.

Steve Corderio is a businessman who is registered to vote and resides in Marion County.

Jeanine Wenning is registered to vote and resides in Linn County. She was a poll watcher during the 2022 Election whose rights were abused by election officials.

Diane Rich is a business woman who is registered to vote and resides in Coos County. She was a candidate for County Clerk for Coos County in the May 2022 election.

Pam Lewis was a candidate for Coos County Commissioner and is a leader in the Coos County election integrity group. Mrs. Lewis is registered to vote and resides in Coos County.

Readers of the Advocate can download and read the full complaint by clicking here.

The Plaintiffs have also filed a Motion for Limited Expedited Discovery with the goal of preserving documents in the 2022 election by taking up to three forensic images of the tabulating computer servers at each of the Counties during the period of election tabulation.

Last week, Marc Thielman, one of the chief plaintiffs in the lawsuit was interviewed on The Lars Larson Show about the allegations the lawsuit makes against Oregon officials. A recording of this segment can be listened to on SoundCloud by clicking here.

Great to hear that Oregon’s SOS will be challenged. All of the Progressives that I know (quite a few) believe that cheating and lying is OK if you are ‘in the right’. And all zealots believe they know what is best.

WOW!!!! i hope they get all the dirt. i was just praying for this!!!! hallelujah!

We need a vote integrity protest at the state Capitol

Everyone should want open and fair election. Just what does the state of Oregon have to hide?

I would like to know how we can all become parties to this lawsuit on the plaintiff side.

This lawsuit is such great news! Folks! Let’s go! In the words of the great Frederick Douglass, “Do right though the Heavens fall. We have no right to do evil that good may come, nor to refrain from doing right because evil may come.”

There is a growing number of voters that were “Disqualified” from voting, for they “Moved” out of state. So far, all are Republican voters. I am one of them. I was notified that I was NOT eligible to vote, due to “Moving out of State” and Registering to vote in that state. I had to go to the county clerk office in person and show my ID, to get things put back where they belong (Ironic in itself – having to show my ID!). Still no response from the SOS office in Salem. I want to know when and to which state I allegedly “Moved” to?

This is the right way to do things.
These people have “standing”.
The wheels of Justice turn slowly but it is important to keep them moving forward.
All people in Oregon, regardless of ideology, should be interested in the objective truth.
We shall see what is discovered.

Dirty, rotten lowlifes have ‘SWAMP’ written all over them! Throw the book at them No mercy for the merciless!

At long last, I hope and pray these honorable folks are successful in their court cases against the corrupt state of Oregon and its officials.

How does one check to see if a Clackamas county ballot was counted, went to Secretary of state website, track my ballot and all it said that it was received, it didn’t say accepted…as in counted.

We (Oregon) need to dump the Fraud-by-Mail scam ASAP else nothing will change. Nothing.

Something has to be done.

Make sure you are also getting access to the poll books. I know couple district in Texas had numbers jump up on their poll books at the end of the night by several hundred people.

I still want to know how Oregon called the 2020 election for president five minutes after the polls closed.