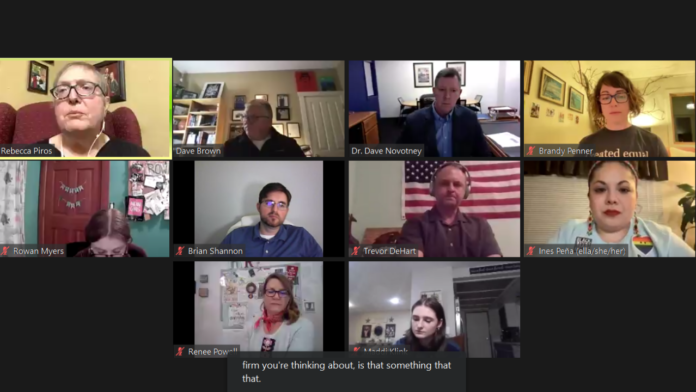 During last night’s meeting of the Newberg, Oregon public school district board of directors, Director Ines Peña announced her resignation, which was made effective during the meeting. As reported in a previous Advocate article, Peña has been an active member of Newberg Equity in Education (NEEd), the Indivisible aligned social activist group responsible for the recalls against school board directors Brian Shannon and Dave Brown as part of a plot to re-take control over the Newberg school district so that the social activist group may continue to indoctrinate children in fringe political beliefs such as Critical Race Theory, with the stated goal of changing the voting culture of Newberg, Oregon.

Peña’s resignation caps off a round of recent resignations by Newberg school district employees, notably administrators, that started once it became clear that there are not enough votes to recall school board directors Dave Brown and Brian Shannon.

Here is a list of several notable resignations mentioned during last night’s school board meeting,

There is also one retirement,

The resignations were also announced on the Facebook page for the Newberg Public Schools district, no doubt posted by Gregg Koskela, the Communications Coordinator, who is also an active member of the NEEd group as well.

I think it is worth mentioning that Tim Graham was particularly outspoken about his participation in the recall campaign against Brian Shannon and Dave Brown, going as far as to spread misinformation about a non-existent plan to have Marc Thielman brought in as superintendent, which as explained in a previous Yamhill Advocate article, was never in the works because Thielman had no intentions to be hired in the first place. The false story was spread by ex-Newberg Graphic and current Oregonian writer Ryan Clarke.

This wave of resignations could be an indication that the Newberg Equity in Education (NEEd) group is fracturing as a consequence of the fallout from their failed recall campaign, which has cost the Newberg school district taxpayers an estimated $60,000 from the school’s budget.

The Newberg school district has also reportedly faced a staffing shortage due to a difficulty to hire teachers as a consequence of the covid-19 epidemic, and the usage of emergency powers by Governor Kate Brown last year to require all K-12 teachers to be vaccinated.

You can watch a recording of the school board meeting via the embedded YouTube video below,

Additionally, per conversations taking place in a public Facebook group thread in Yamhill County News and Discussion, there is a possibility that the resignation of Ines Peña was known to Brandy Penner and Rebecca Piros ahead of the announcement, per the response provided by Megan Corvus (one of the founders of Progressive Yamhill and the Recording Secretary of the Yamhill County Democrats) to public discussion about the topic,

Good riddance! I’m sure there are plenty of schools in more liberal areas that would love to have you.

Plot? That word implies that the recall effort was somehow inherently wrong or illegal which was not the case. You continue to show your bias by fomenting fear about CRT being taught in Newberg schools had the recall been successful. Anyone that does some research on CRT will realize that it is not meant to be “taught” to school children and there has never been any plan to include it any of Newberg schools curriculum. The Yamhill Advocate is not news…it is right-wing claptrap.

Newberg Equity in Education’s mission statement literally says the group was formed to get CRT into the schools. I published this evidence months ago, https://www.yamhilladvocate.com/2021/10/meet-the-newberg-oregon-mafia-led-by-elected-officials-and-other-community-leaders/#Newberg_Equity_in_Education_Exists_For_Teaching_Critical_Race_Theory_to_Kids

Hi Carey,
Are you afraid that you will lose your white power if education tells the story of systemic racism? Good. Then CRT has done it’s work well and you will never be able to stop it 🙂
Evidence. ROFL….

Had you bothered to actually read the previously linked articles, you would know that I (Carey Martell) do not even believe in the concept of races, because there is no scientific evidence that human races exist. All humans are too closely related for there to be races and it is a constructed concept. It seems clear you have had your mind poisoned by racist ideologies like Critical race theory.

So she was political, now she knows she lost well heck with the work. Kids you were used as a pawn. A political pawn.

Carey, I wish you had 15K circulation. The revelation about Tim were worthwhile. I had forgotton that info.
Re Pena: Adios. When the going got tough, she bailed. Two weeks from now the news cycle will have lost all memory of her. People call her The Potato. And her gravy train ran out….

One down, two to go.
Penner and Piros both need to he removed by better candidates in 2023. Which shouldn’t be a problem
since they’re wokecrat ideologues, pretending to be serious board members.
Penner should actually resign since she stated she can’t work with the current board..

Well done Carey. I worry about the future for my children, and applaud the way you help to expose the truth for us. CRT is damaging, and just not true.

The ignorance of this article, and the comments made, shows the desperate state of education in this tiny area of the U.S. I feel sorry for the kids in this district, growing up with ignorance masquerading as ‘truth’. Luckily, that time is ending in the U.S. I’m so glad I brought my liberal ideals up from CA to infect y’all 🙂

I highly suggest that you read other books written by non-Critical race theory advocates that expose the fundamental flaws with Critical Race Theory, such as ‘Woke Religion: How a New Religion Has Betrayed Black America by John McWhorter https://www.amazon.com/Woke-Racism-Religion-Betrayed-America/dp/0593423062

On the Level
Guest

Is their any particular reason that school districts can’t hire real teachers to do real teaching or must they all drag their misinformed political agenda’s along with them? I can remember when real teachers were respected now I’d rather change sides of the street with them…