In response to the Newberg Public Schools board terminating the employment of Joe Morelock as superintendent under the terms of his contract for "no cause", Oregon Democrats seek passage of a new law via Senate Bill 1521 to prevent school boards from firing superintendents. 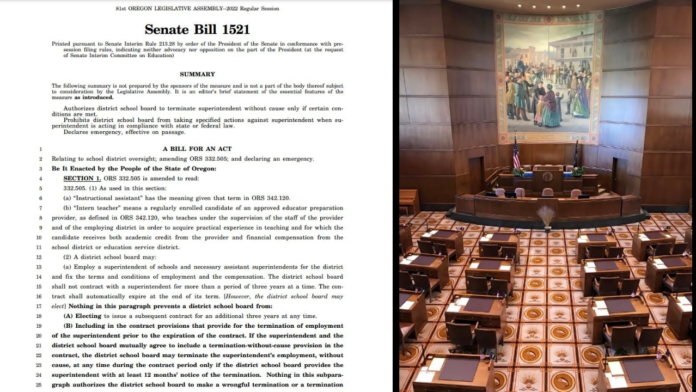 Today the Oregon Senate is discussing the proposals of Senate Bill 1521, which seeks to adjust the laws of ORS 3332.505 to restrict how a public school superintendent can be fired by a local school board. If passed, the law will require any superintendents fired for “no cause” to be provided an entire year advance notice, meaning the superintendent will be able to continue to govern a public school district for an entire year until they are required to leave the position. The law is a gross overreach of authority that is designed specifically to encroach on local government rights that exclusively belong to local school boards. The bill also claims this bill must be enacted immediately upon its signature, declaring it an “emergency”.

As reported by both The Oregonian and Oregon Capital Chronicle, supporters of the bill include Coalition of Oregon School Administrators and the Oregon School Boards Association, who stated the bill has been introduced with the specific goal of preventing newly elected school boards from firing superintendents. I believe it is specifically to prevent the termination of superintendents that permit teachers to indoctrinate children in Black Lives Matter ideologies in the classrooms.

The reason I make this claim about the intention of Senate Bill 1521 is because that is why these groups have said they want the new law; they are upset because this past November, the Newberg, Oregon public school board terminated the employment of former superintendent Joe Morelock for his refusal to enforce a new policy passed by the school board that prohibited teachers from indoctrinating children in BLM ideologies. Consequently, that is what the intention of the bill is designed to prevent from occurring elsewhere in the state.

The phrasing of Senate Bill 1521 can be read by readers by clicking here. I have also embedded the language of the bill into this article for your reading convenience.

Something you should know about the bill is that, oddly, it has been introduced without mention of which Senator sponsored it. As pointed out by Baker City Herald in a recent editorial, Senate Bills 1521 and 1522 and House Bill 4031 have all been introduced into the session without the name of any sponsoring legislator. So, at this time it is unknown which specific legislators are responsible for drafting a bill designed specifically to stop school boards from removing BLM friendly superintendents, as which occurred in Newberg.

However, as previously reported by the Advocate back in October, we know that at least one elected state representative is drafting legislation to restrict Newberg school board. State Representative Courtney Neron is deeply involved in the Newberg Equity in Education (NEEd) a splinter-cell of Progressive Yamhill, which itself is a registered chapter of the Indivisible movement (which, as I reported, a strong supporter of BLM and its agendas).

As I revealed in the December 7th article where I first discussed House Bill, Represenative Courtney Neron has used her seat to introduce several bills that align with Indivisible agenda.

I believe it is also worth mentioning that Progressive Yamhill’s membership includes the entirety of all officers of the Yamhill County Democrat Party, as detailed in my previous reporting.

A related proposal, the so-called “School Leaders Training Act“, would require all newly elected school board members to attend and pass classes that seek to indoctrinate the officials in BLM ideologies, and this training would also be required of education service districts and public charter schools as well.

Make no mistake; Black Lives Matter as an organization is deeply involved in the efforts to indoctrinate children into the fringe ideologies of Critical Race Theory and the gender identity theories of the discredited former John Hopkins professor John Money. As reported by the National Review in the article BLM ‘Week of Action’ Teaching Students Nationwide to Affirm Transgenderism, Disrupt Nuclear Family, the Black Lives Matter at School movement started in Seattle in October 2016 when thousands of educators, along with hundreds of families and students, came to school wearing BLM shirts, according to the BLM at School organization. The first nationally-organized week of action occurred in February 2018. Per the starter kit on the Black Lives Matter at School project website, the curriculum is to be taught by teachers to students and that curriculum is based off the 13 “Black Lives Matter Guiding Principles.” Those principles include a commitment to restorative justice, being transgender affirming and queer affirming, creating space for black families that is “free from patriarchal practices,” and “the disruption of Western nuclear family dynamics and a return to the ‘collective village’ that takes care of each other.”

However, by ‘collective village’, what they are actually desiring is self-governing racially segregated communities, which many BLM associated groups refer to as ‘black utopias’, as previously reported by the Advocate. These ideas are nothing more than a continuation of the terrible racist desires of militant black separatists from the 1960s, such as the Black Panther Party and the Weather Underground.

(Note: The full contents of the PDF on the Black Lives Matter at School project website is behind a Scribd paywall; you can download the entire PDF by clicking here).

Furthermore, as detailed in the previous Advocate article, Leaked Emails Show Oregon Education Association Teacher Union Is Assisting the Recall Against Newberg School Board Directors, the Oregon Education Association also involved itself in the efforts to recall Newberg public schools directors Brian Shannon and Dave Brown for voting to terminate the employment of Joe Morelock after he refused to comply with the new policy to prohibit teachers from displaying politically divisive symbols in the classrooms as part of these efforts to indoctrinate children.

This is an election year in Oregon, and voters should ask themselves if they want to continue to support the candidacy of the Democratic Party of Oregon which has clearly been taken over by fringe radical extremists and is using authoritarian and fascist tactics as a means of eroding the power of local communities to self-govern, going as far as to force school board members to attend mandatory indoctrination “training” in their ideas and to remove their ability to even fire a superintendent — which is the primary duty of a school board, for those unaware. The primary thing which school boards do is work through superintendents to ensure the policies of the school are enforced, and if superintendents fail to do this they are to be removed and replaced by the board. The language of Senate Bill 1521 is specifically designed to prevent voters in rural areas of Oregon from electing new school board directors who may fire a poorly performing superintendent. It has no other purpose.