There will be a hearing on May 12th about a proposal to make huge changes to the Newberg city codes that would restrict the display of political campaign signs during elections. 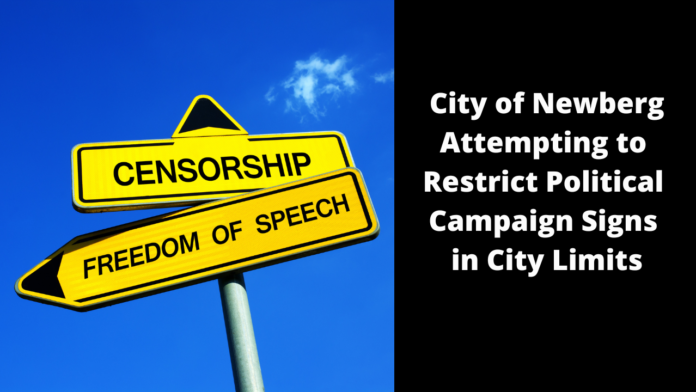 The City of Newberg is attempting to restrict political candidate campaign signs within city limits, per a recent proposal produced by its Planning Commission. This proposal was created in response to Resolution No.2022-3798 passed by City Council on February 24th asking for recommendations to change the city codes to prohibit these signs from display on yards and in public right of way. A hearing on this issue is scheduled for May 12th.

The proposal claims that because there has been “complaints” about political signs that this is valid justification for restricting the display of candidate campaign signs within Newberg city limits. The proposal is claiming that the number of these complaints is “becoming a hindrance to normal safety related code enforcement operations“.

The proposal eliminates Section B: Election Event from 15.435.100 Temporary signs for events and would replace it with,

B.  Other Events. A lot may have two other events per calendar year. The events may not be more than eight consecutive days in duration, nor less than 30 days apart. A temporary electronic message center may be used during the event. An unlimited number of temporary signs are allowed during the event. The applicant shall notify the city in writing of the beginning and ending dates prior to the other event.

As a consequence of these changes, I believe residents in Newberg would no longer be able to display campaign signs for all of the numerous recalls and elections that take place in a single year. They would instead be restricted to only be able to display any kind of temporary signs during two “events” in a single year, no matter whether they are elections or something else like a signature gathering campaign or perhaps even a sporting event, or a holiday like Christmas and Halloween. The language seems to be written to be purposely vague so that it would permit a loose interpretation of what constitutes an “event” to suit enforcement desires, but it is clear that it is intended that a resident would only be able to display political campaign signs during two such “events” per year. Newberg has, at present, already experienced three recall election events this year and this November will have elections for city, county and state positions.

As many voters may be aware, this is an election year where nearly every seat on Newberg City Council will be on the ballot. If this proposal were to be passed this could mean that local residents who support candidates who run against the Progressive Yamhill aligned City Council incumbents could be restricted from displaying yard campaign signs, which are the predominant means of alerting locals and for others to show their support for a candidate that is running against them. Local residents would be heavily restricted on how many signs they could display for each candidate, and therefore not be able to display signs for all candidates they support at the city, state, federal level, as well as other positions such as district attorney, Chehalem Parks and Rec. Directors, and so forth.

By contrast, with the way the proposal is drafted it would mean that residents could still display other kinds of political signs such as Black Lives Matter flags and gay pride flags all year long, as the code changes will permit the display of up to two flags without restriction, but any yard signs featuring candidates for election would be heavily restricted, as there is no longer a section of the code that permits temporary signs during an election event and, with how it is written, if people were to display signs during a holiday like Christmas or Halloween they could have used up their two “events” per year uses and now not be able to display any signs promoting a candidate. At the very least, if you displayed signs during two prior recall events during a general election season, or displayed signs during a primary election, then you would not be able to display signs during the actual general election event when votes matter most. Consequently, I believe the measure seems intended to censor political speech during election seasons as it no longer has any express permission to allow temporary signs for these elections.

I also want to point out that Progressive Yamhill member Jeff Musall is the chair of the Planning Commission which created this proposal restricting political campaign sign displays in Newberg. I point this out because Progressive Yamhill commonly organizes its members to file large volumes of frivolous complaints with organizations its members hold positions in, so that those members with power over those entities can justify decisions they already wish to make. I have shown a great deal of evidence for this in prior articles already published on the Yamhill Advocate, most notably Part 2: Meet Progressive Yamhill, the Parent Group of the NEEd Mafia Seizing Control of the County. Consequently it would not surprise me if the “complaints” mentioned in their justifications for these changes originated from Progressive Yamhill members with the intention of their affiliated members on Newberg City Council using these “complaints” to justify changing the law; it is my belief their main motivation is to restrict local conservatives from displaying anti-recall campaign signs, such as were displayed during Progressive Yamhill’s recall efforts against Yamhill County Commissioner Lindsay Berschauer and Newberg school board directors Dave Brown and Brian Shannon. Having failed to recall these politicians they are now trying to change the laws to make it harder for conservatives and moderates to counter their efforts using temporary advertising signs to build awareness of a counter-message.

In my personal opinion it is likely that this ordinance would violate Newberg residents’ First Amendment right to show their support for local political candidates during an election season and subject the City of Newberg to lawsuits if it were attempted to be enforced. What right does the City Council have to tell 20,000 people they can only display “event” yard signs a couple times a year and cannot show support for or against local campaigns using their own property?

I regard this proposal as yet more evidence of the rampant abuse of political seats of power to benefit Progressive Yamhill members’ personal political agendas. Given the timing of this proposed change to local ordinances, it appears to me that it is motivated by Progressive Yamhill members attempting to use their control over Newberg city government to restrict the free speech of their political rivals, the local conservatives and moderates who significantly outnumber them and are likely to vote them out of office this election season after the numerous scandals they are responsible for. They appear to be afraid of losing this year’s election and are attempting to make it more legally difficult for challengers to advertise their campaigns for their incumbent seats. One can only wonder how this blatant disregard for resident’s 1st Amendment right to free speech will pan out for them; will local residents allow their rights to be trampled upon so brazenly, or will they fight back?

So they will then probably create a new staff position to monitor every home in Newberg as to how many events they have promoted by using signs in their yard.
How incredibly ridiculous!!

More rules will bring more infractions….. The Lefty Council got disturbed when they were beat 20:1 by conservative signage. BTW Denise Bacon says Will Worthey is now our new City Manager and he will enforce these new rules zealously.

Could not edit below comment To Read: Denise Bacon says Will Worthey is our new City Manager. I expect Worthey will enforce these new rules zealously.