A public records request shows that Newberg, Oregon school counselor Erin Dobias who flipped off parents in a viral TikTok video chaperoned students on a school organized trip while she was supposed to be suspended. 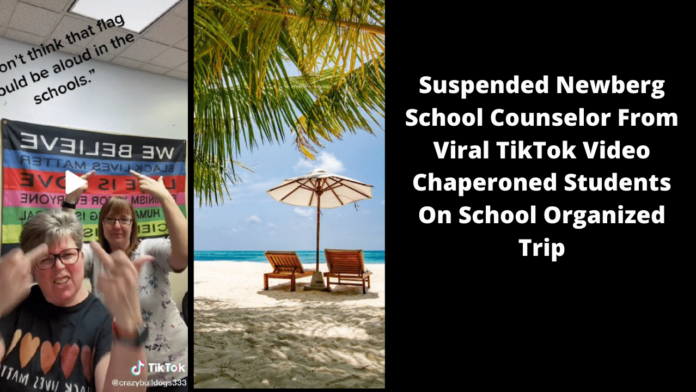 On March 10th, I published the news article, Newberg Middle School Counselors Flip Off Concerned Parents In Tik Tok Video. In this story I provided evidence that Mountain View Middle School counselors Annie Bynum and Erin Dobias in Newberg, Oregon spend their work hours making Tik Tok videos, one of which featured the pair performing a vulgar gesture while standing in front of a pride flag decorating a classroom wall.

The Advocate followed up this report on April 27th with the article Newberg Public Schools District Protects Counselors Who Made Controversial TikTok Videos. In this article I shared correspondence between myself and school district representatives who I believed to be obstructing my public records request for emails related to a school organized trip to Ecuador that Erin Dobias organized and chaperoned students on despite the district claiming publicly that she was suspended from work.

As a reminder, it was the position of former interim superintendent Dave Novotney that the trip to Ecuador was not school organized and so Erin Dobias was permitted to go on the trip as a chaperone despite being suspended by the district while an investigation was made into her social media activities.

I disputed this claim, as the trips had been advertised on the school district website showing Erin Dobias was the point of contact, using her official school employee email address. I then filed public records requests for emails sent to Dobias’ email inbox related to these trips in an effort to confirm the precise relationship the district had with the trips. This request was not fulfilled in a timely fashion and led to the publication of my article showing the obstruction by school district employees to delay and/or otherwise prevent the fulfillment of the record request that might show the trips were indeed school organized and that Dobias therefore should not have been permitted to attend the trip as a representative of the district while she was suspended.

I am now updating this story with new information I have obtained after finally having my public records request re-assessed by the new Newberg school district Superintendent Stephen Phillips who instructed Shanna Andres to provide the requested documentation to the Advocate.

The emails I have obtained related to the international trips reveal some startling information.

EF Tours appears to be a division of EF Education First, a privately held corporation based in Lucerne, Switzerland which has operated since 1965. According to its website the company specializes in language training, educational travel, academic degree programs, and cultural exchange programs. The company sells tour packages to schools which parents can purchase that cover the cost of airfare, hotels, any ground transportation, tour guides, and 2 meals a day. EF Tours is, essentially, a tour agency specializing in school organized trips.

I think it is worth pointing out that the company advertises an “Equity Diversity Inclusion” statement on its main website page, and it also has a page of its website where its employees recommend Critical Race Theory propaganda books such as Anti-Racist Baby.

According to this report from NBC Boston 10 published in May 2020, EF Tours was the subject of a lawsuit from the Massachusetts Attorney General’s office after receiving more than 600 complaints of EF Tours refusing to provide refunds for canceled trips.

The Emails Prove the Trips Were School Employee Organized

As an example this is an email from 4/28/2021 from Annie Bynum to Erin Dobias and Counseling Secretary Cynthia Wall directing them to provide information about the trips to parents in a newsletter.

In another example, on 4/22/2021 Erin Dobias sent an email to parents who had signed up for a trip to Washington DC informing them the trip would be canceled and then recommended other trips for them to sign their children up for, including the trip to Ecuador,

In this email it is made clear that the points of contact for questions concerning the trips are counselors Annie Bynum and Erin Dobias, and not EF / EF Explore America Tours.

In another email to parents, Annie Bynum states “I am taking over domestic EF trips!” which is meant to say she is the point of contact for organizing the trips.

As you can see the email is signed with Bynum listing her position and role in the Newberg school district. She is consequently sending this communication in her capacity as an employee of the district.

As you can see the email is signed with Dobias listing her position and role in the Newberg school district. She is consequently sending this communication in her capacity as an employee of the district.

Dobias also received emails whenever someone applied to go on the trips, with the option to review these applications.

Most importantly, I saw an email where Dobias contacted a parent who had signed up for the monthly payment option to pay for their child’s trip, where the payments are made to EF Tours, and yet Dobias is the one who reached out to this parent who fell behind on making their payments. Here is an example,

The batch of emails I received showed numerous communications like this sent by Dobias and Bynum, which prove beyond all doubt that these school employees heavily promoted these trips to parents using multiple avenues of communication ranging from announcements on the school district website, Blackboard communication portal and various newsletters, as well as directly emailing parents to solicit them to purchase the trips. More than that, school employees such as Bynum and Dobias acted as sales representatives for EF Tours to the point that they actually contacted parents who fell behind on making monthly payments for the trips.

Lastly, there are emails such as this one from 5/28/2021 that was sent to Dobias by EF sales staff, which clearly outline that these trips are REQUESTED by Erin Dobias and planned to the specifications requested by her, and that she has final approval over their details,

Consequently I believe that my initial reporting about these trips were accurate; the school district, by its employees, organizes the trips. That they have a travel agency who handles the scheduling of plane tickets and hotel lodging for the trip participants does not change that the school employees in their capacity as employees of the district organize the trips. They would not happen without the involvement of the school district and its employees, and school resources such as email addresses, newsletters and websites are used for the organizing. The employees also represent themselves as employees of the district when soliciting parents to purchase these trips for their children.

Consequently, Erin Dobias was permitted to continue to do work on behalf of the district by participating in the trip to Ecuador, a trip she organized as an employee of the school, despite the district having publicly claimed she had been suspended from work.

I conclude that at any attorney who reviewed the relationship between EF Tours and the Newberg Public School District and then determined that the trips were not school organized is probably not a particularly good attorney who clearly did not properly investigate the relationship before advising Novotney on his decision to permit Dobias to attend the trip as a chaperone despite her suspension. I would probably not trust the opinion of this attorney in any future matters.

Now, I did see an email within the batch provided to the Advocate where Erin Dobias claimed to a parent to have paid for her trip herself, but another email I saw implies something rather different.

Possible Financial Benefits to Erin Dobias for Organizing the Trips

While it is not unusual for schools to partner with private companies to have students act as sales representatives for the companies products and earn a commission with the goal of the earned money going toward some kind of school organized activity such as a trip or new sport uniforms, I did notice something I did find to be highly irregular.

One of the emails I received appears to be an automated email sent to Dobias by EF after Dobias had recruited her fellow counselor Annie Bynum as a chaperone for one of the trips. The email states that Dobias will earn a $1,000 bonus if she recruits at least six parents / students for the tour. According to this email the cash bonus can also be used as credits toward an EF trip, such as the ones she participates in.

Based on emails I read from this submission, they had at least 19 people on the trip to Ecuador.

This kind of incentive could be viewed as an illegal kickback, as public employees are not allowed to receive monetary gifts from private companies for the work they do on behalf of a public agency such as a school district and to do so is a violation of Oregon state law.

Oddly, this appears to not be the only kind of solicitation by a private company which Dobias received to her inbox; I was also provided an email where Venmo offered Dobias cash rewards for recommending recently graduated students in some kind of contest Venmo was running which appears to have been part of a signup promotion targeting recently graduated high school students.

Oddly, I was also provided emails that imply Erin Dobias had been using her employee email for personal usage, such as for purchasing concert tickets, ordering deliveries from McDonalds and making purchases on Amazon. She also appears to have signed up to HBO Max using her school employee email address for the account.

It is highly irregular for a school counselor to be registering a payment app like Venmo to collect payments made to a school district. Should these kinds of payments not be going through some kind of accountant? And to whom were these purchases reported to? These are questions I don’t yet have answers to.

At this time the Advocate is unaware of any disciplinary action that the Newberg Public School District has taken against Annie Bynum, Erin Dobias and Vicki Klein for the videos they produced on their Tik Tok channel during work hours.

So are they still suspended? With pay? Who’s position is it to pursue penalties or discipline actions? School board? Principal?

I want to know too, the answers to the questions you asked. The teacher who was accused of painting her face black, is she still employed by the school district?