Chehalem Valley Middle School Principal and social activist Casey Petrie resigned from her position in the Newberg Public Schools District to take a position as Principal of Alberta Rider Elementary School in the Tigard-Tualatin School District. 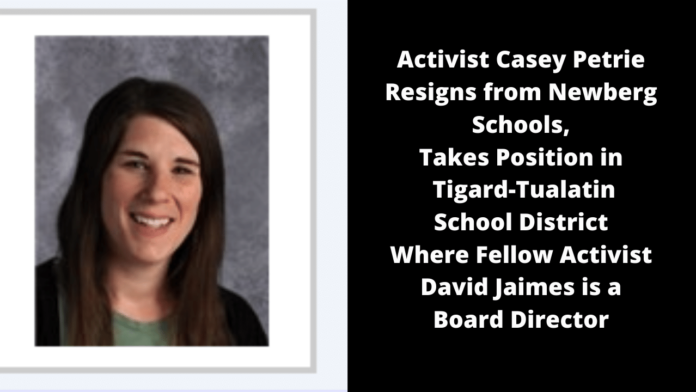 As previously reported by the Advocate in the article Newberg School Principal Casey Petrie Refuses to Remove BLM Flags as Violent Protests Erupt Nationwide, Casey Petrie is a member of the extremist activist group Newberg Equity in Education (NEEd), which is a subgroup to Progressive Yamhill, a registered chapter of Indivisible.org. As a movement Indivisible endorses fringe Marxist ideologies, desires the defunding of police and closure of prisons, wishes for the eradication of US Immigration and Customs Enforcement (ICE), and pushes for the indoctrination of children into fringe sexual fetishes at a young age. Progressive Yamhill members have been proven to have given resources and funding to various Antifa groups operating in Oregon, especially those which attacked the Federal courthouse in Portland during 2020.

One of the founders of Progressive Yamhill, Megan Corvus, is a self-declared racist,

The fringe version of racism which Indivisible groups encourage is Critical Race Theory (CRT), which promotes racial segregation as a means of creating ‘equity’ in society. They reject the more mainstream Common Humanity approach which encourages cultural integration and equal rights for all under the law. For a more detailed analysis of CRT you can read my lengthy article about it by clicking here.

As previously reported in the original article, last November Casey Petrie made a statement that she refused to have any teachers remove political propaganda such as the Black Lives Matter flags from classrooms, even as BLM protestors organized nationwide violent riots on the heels of the Rittenhouse trial verdict. The BLM movement is an advocate for CRT ideologies.

In the time since the publication of my original article, Black Lives Matter founder Patrisse Cullors was discovered to be living in a $6 million dollar home purchased with donation funds. The BLM organization is currently under investigation by the California Attorney General for sketchy financial reporting. It had been widely believed by critics of the BLM movement that the organization was an elaborate scam designed to enrich its founders and there is now evidence to support this claim.

Tigard-Tualatin School District May Be Controlled by Indivisible Agents, Too

Casey Petrie has now resigned her position in Newberg and taken a new job as Principal of Alberta Rider Elementary School in the Tigard-Tualatin School District, as reported by the Newberg public school district website,

This move is unsurprisingly to me, as her fellow NEEd member David Jaimes is a Board Director in the Tigard-Tualatin School District.

Proof of his membership in NEEd comes from the list of members of their secret Facebook group which I obtained last August,

It is also worth noting that Indivisible has other chapters in Tigard and Tualatin, such as Action Together Tigard which Laurie Alexander Thomas is the admin of and has 128 members. Another group, Action Together Oregon–Tualatin/SW Suburbs, is administrated by Amanda Corry Thorderson whose Facebook profile claims to work at the Tigard-Tualatin School District and whose LinkedIn profile is here,

(You can download this spreadsheet that lists every registered Indivisible chapter in the USA and search for the city you live in. Note the list is not organized alphabetically and you may need to search multiple times to find all of the groups in a particular city).

Casey Petrie’s move comes on the heels of the failed recalls against Newberg School Board Director Dave Brown and Brian Shannon which were organized by NEEd / Progressive Yamhill in a desperate effort to regain control over the Newberg school board after several of its members lost in last year’s elections to Trevor DeHart and Renee Powell. After the firing of Joe Morelock as superintendent and the hiring of Steven Philips in that role, several teachers and administration staff resigned to take positions in other districts where Progressive Yamhill members also teach. And earlier this month the last of the NEEd / Progressive Yamhill members on the Newberg School Board, Brandy Penner and Rebecca Piros, resigned.

While the Newberg Schools Saga has a clear victor in the moderate and conservative majority ousting the fringe extremist activists from control over the school district, I fear the unfortunate reality is that these activist teachers have not given up in their goal to indoctrinate children into radicalism using the public school system. I believe they will continue to do so in the schools they have moved to.

It will be up to local parent groups in these other Oregon cities to form coalitions to oust these radicals from the schools, as this is what proved successful in Newberg at removing these extremists from control over the schools. The first step is to take back control over the school boards using the electoral process, and then the next is to implement board policies prohibiting teachers from indoctrinating the students into anti-American political ideologies. When they refuse to enforce the policies, they must have their employment terminated and be replaced by staff who will follow the board’s directions. This is the only way to combat the agenda of Indivisible agents and their organized campaigns to indoctrinate the youth of Oregon into radicalism.