Steve Phillips was selected as the new superintendent of the Newberg, Oregon public school district and local social activists are very unhappy about it. 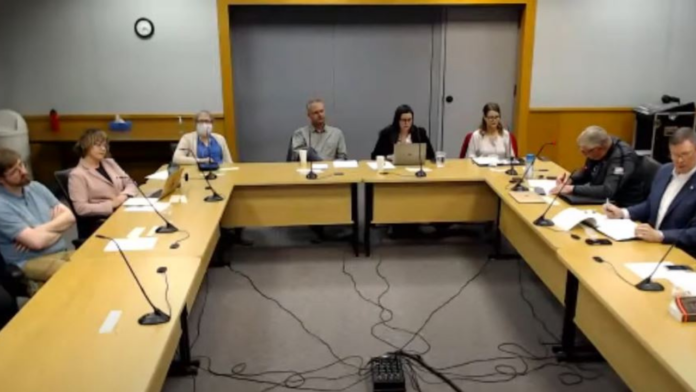 At the May 10th meeting of the Newberg Public Schools Board of Directors, the Board voted 5-2 to hire Steve Phillips as the new Superintendent of the school district in Newberg, Oregon.

This was not the outcome that Progressive Yamhill members and their sympathizers hoped for, and I think this was made clear not only by the postings of PY members on social media but also the way in which other local media who have historically been sympathetic to Progressive Yamhill have characterized the hiring in their reporting. For example, KGW published an article titled, Newberg school board hires new superintendent who previously resigned from Beaverton schools over racist retweet, which mischaracterized the tweet as racist when it was most obviously not, as “illegal alien” is neither a racial nor ethnic identity.

Readers of the KGW article may notice that the link to what Phillips actually tweeted is a broken URL. Here is an actual screenshot of what Phillips had tweeted,

To be clear, I personally don’t disagree with anything said here. Illegal immigration is just that — illegal. Consequently, citizens of a country should not be getting murdered by people who illegally entered that country. Anyone who believes otherwise does not respect the sovereignty of the United States as a nation. While I am certainly sympathetic to the plight of people who travel to our country in search of a better life for themselves and their families, I believe it is important to show that you respect the laws of the country you desire to live in and have obtained permission to enter the country lawfully.

It is also a fact that semi-automatic rifles are used in less than 1/3 of all gun related homicide incidents, with handguns making up 2/3 of the weapons used to commit murders.

It is also a fact that organized crime activity from groups like Mexican cartels includes the murder of US citizens. In fact, the cartels even operate in Oregon, operating hundreds of illegal cannabis’ farms and murdering business rivals.

Consequently the post which Phillips retweeted was not “Racist” as claimed by KGW‘s hack writers, but instead nothing more than a statement of fact. America has social problems, and organized crime by illegal aliens associated with groups like the Mexican cartels are some of these real problems that are not being dealt with by state and federal government as many citizens would prefer it be.

The KGW article also claims that its reporters attempted to reach out to School board directors Brian Shannon and Dave Brown prior to the publication of their article, but the timeline does not add up. For proof I have been provided the email communication between Brian Shannon and KGW general assignment reporter Timothy Gordon, who appears to be the writer responsible for the article.

In the article as it is written at present, it was claimed that Shannon and Brown were given an opportunity to share their points of view. The article states that Shannon replied but “didn’t respond to the topic“,

Brian Shannon has provided the Advocate with the request he was sent by Timothy Gordon, which clearly shows KGW published the article within 37 minutes of asking Shannon for a comment, which practically gave him no opportunity to do so prior to publication. It is a common best practice to give people at least 24 hours to respond if you are going to claim you asked for their input and edit an article to make it seem as if you asked that question with sufficient time given to respond prior to the publication of the article.

By reading the email communications you can clearly see the KGW article has been written to deceive readers.

(note: the following email chain has been edited to make it easier to read the communications in chronological order. None of the content was changed.)

I agree with Shannon’s assessment that KGW has engaged in heavily biased and intentionally misrepresentative reporting of the facts. Steve Phillips’s retweet was not racist in nature and it is clear by the communication that Shannon was not provided sufficient time to provide a comment prior to the publication of the article with intentionally misleading information in it about Phillips.

Here is a sampling of Progressive Yamhill member’s social media posts in response to the decision to hire Phillips.

First, let’s start with Brandy Penner, who is one of the two Newberg school board directors who voted against hiring Phillips. She is also a member of Progressive Yamhill, as I have pointed out in prior articles (I also feel its worth mentioning that the URL for Penner’s Facebook Page is https://www.facebook.com/NewbergSchoolBoard — clearly she believes she speaks for the entire school board and that is why she chose that custom URL for her Page).

It should not be surprising that Phillips is unfamiliar with the term ‘neurodivergent’ because it is a social activist buzzword invented by parents originally as part of the so-called ‘autism rights movement’ but has since been co-opted by parents who teach their children to blame conditions like ADHD or Asperger’s for their social behavior problems instead of learning how to control their emotions and be accountable members of society. People who use the term ‘neurodivergent’ oppose viewing neurological disorders as requiring interventions to correct and/or cure them, and instead believe they should only be “accommodated” — that is, everyone should walk on eggshells and tolerate rude, abusive behavior by those who want to blame their condition for their inability to follow simple social norms like not screaming at people to get your way (I also believe many of the parents in the so-called ‘autism rights movement’ view public school systems as nothing more than free daycare and do not expect their children to learn skills to be able to live independently of the parent, and this largely contributes to the parent’s desire to excuse behavior problems away instead of working to correct them and teach the child to self-regulate themselves — which I find to be tragic considering it results in teaching the child to be an infant their entire lives, even if they do have the potential to live independently of the parents. While the parent could be trying to protect the child, in the long term they leave the child unprepared for an inevitable reality — someday, the parent will not be able to take care of their child and that child will have to navigate life without them.)

Next, let’s look at Kristen Stoller, who was cited in the KGW article I mentioned earlier.

Given the events that Kristen Stoller organizes (such as Wine Country Pride) that are designed to introduce kids to sexual fetishes such as crossdressing, I find it absurd that she would label anyone an extremist.

Why I Believe Mr. Phillips Was Chosen

As mentioned previously in this article, I don’t disagree with the statement Phillips retweeted while he worked in the Beaverton school district and I believe most Americans don’t view his statement as an extreme point of view. Illegal immigration is a crime and that is a fact. Tweets criticizing criminal activity is not extremism and the tweet was not racist in nature.

And as reported in the previous article, The Facts About Jewell Superintendent Steve Phillips’ Paid Administrative Leave, the often-referenced “investigation” in the Jewell School District is the result of Phillips firing an employee for alleged sexual harassment misconduct.

While I have been provided additional information concerning the lawsuit against the Jewell School District by the former employee Phillips terminated, I have as of yet been unable to confirm any new facts that would change my previous reporting about the matter. Yamhill Advocate has a high standard of fact-based reporting and I make effort to clearly distinguish what is my opinion and what is unquestionably a fact.

I believe that Mr. Phillips was the only superintendent candidate brought before the Board who was not a proponent of ideologies I consider to be aligned with Critical Race Theory (CRT). As the district has been disrupted by the political activities of CRT activists who have infiltrated its teacher’s union, it should be unsurprising that the only candidate who did not use CRT buzzwords in his interviews was selected by the Board. It would be counter-productive for the Board to terminate Morelock after his failures to enforce the Board’s policies intended to remove this extremism from the schools and then hire another superintendent who has the same sympathies as Morelock did.

Philips was the only candidate who openly stated he would enforce the district’s policies. It is not an unexpected outcome that he would be selected, even with his past controversies.

I can say at the very least that the role of a leader is not to make everyone happy, but to instead lead. It is the role of the public schools to prepare children for life as a US citizen who must find gainful employment, participate in our democracy and hopefully someday raise their own family. The Newberg schools have drifted away from this focus to instead become a platform for teachers to elevate their personal fringe political beliefs and indoctrinate students into unhelpful ideas like Critical Race Theory and the pseudo-scientific ideas of John Money’s “gender identity” framework. As I have discussed in a past article, What is Critical Race Theory And How Does It Influence Decision-Making?, these ideas do not help students thrive in life and actually hinder their ability to succeed by teaching them fake histories and misleading them to believe racism is the central organizing principle of our society. CRT encourages students to self-identify as victims instead of encouraging them to strive for excellence and overcome adversities to develop their individual potentials.

It is hoped by the Advocate that as the only candidate who did not exhibit pro-CRT leanings that he will be able to lead the district’s schools back toward their intended mission of educating the next generation of Americans, and away from the extremism that proliferated under Morelock’s administration.

A Progressive Yamhill member made the following comment about this article, which I responded to and which I am embedding here.

And what ever happened to unbiased reporting. There is a glaring lack of any other perspective presented in the KGW rant. And this is a big problem, the unavailability of “the other side of the story”. KGW is obviously owned by Progressive Yamhill, a pathetic representation of journalism.

Thank you for reporting the rest of the story. Without your efforts, misinformation would stand, to the detriment of our community.. You don’t have to be conservative to want balanced reporting. Now we can consider the whole picture as we form judgments and make decisions.

Great article. Thanks.
The hate and lies pouring from the Progressives is astonishing. So please remember to vote NOW. THIS WEEKEND, and vote conservative values.

Look how the left acusses the school board of being the extremists. They always acusse others of being exactly what they themselves are.

Great information. Give the guy a shot. You all on the left preach tolerance, how about you show a bit yourselves???

I believe Elaine Koskela just announced she’s leaving. I’m surprised her husband the communications director didn’t send out an email blast like he does with every other resignation. Hopefully Mr Koskela joins her soon.