Evidence exists that the organizers of the Newberg, Oregon school board recalls are breaking state and local city laws in their effort to push their political activism. 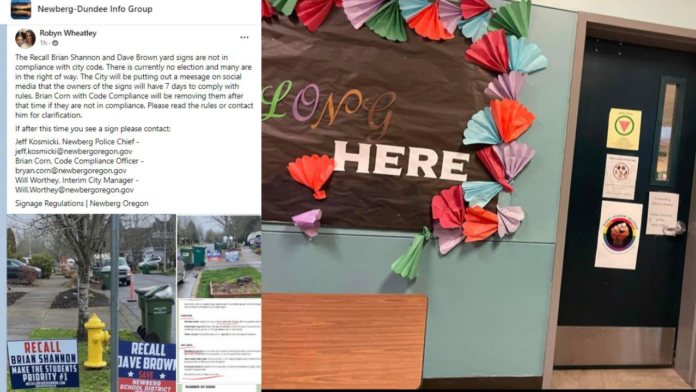 Readers of past Advocate articles will already know that the organizers of the recalls signature collection campaigns against the school board directors have no respect for the laws, having organized everything from stalking to public meeting law violations in their quest to harass Newberg, Oregon School Board Directors Dave Brown, Brian Shannon, Renee Powell and Trevor DeHart.

I think it is about time that residents of Newberg, Oregon start holding these ‘ally-accomplices’ accountable for their misdeeds, and it seems this is starting to happen.

As reported by resident Robyn Wheatley in a post made in the Newberg Dundee Info Facebook Group, the organizers of Recall Dave Brown and Recall Brian Shannon PACs (which are the same people) are violating city and state laws, and that the City is finally doing something about it.

Firstly, the Recall Brian Shannon and Dave Brown yard signs are not in compliance with city code as there is no election certified by the County Clerk.

The City of Newberg ordinance code makes it clear that these signs cannot be displayed,

According to the post, the City of Newberg will be putting out a message on social media that the owners of the signs will have 7 days to comply with rules or the signs will be seized by the city.

If after this time you see a campaign sign, residents are advised to contact Jeff Kosmicki, Newberg Police Chief – jeff.kosmicki@newbergoregon.gov

As a special treat, here are some replies that this announced received from members of the Newberg Equity in Education cult that is organizing the recalls, including Megan Corvus, the Recording Secretary for the Yamhill County Democrats,

I think it’s also worth reminding people that Megan Corvus is a self-admitted racist,

Just in case you forgot who the real bad guys are in all of this. Megan Corvus is one of the ringleaders of the recall effort.

Dave Brown and Brian Shannon are the ones trying to get the racism out of the school.

The actual self-admitted racists are the ones trying to recall them.

Also reported by Robyn Wheatley, Newberg Education Association teacher union president Jen Schneider has placed postcards into the mailboxes at the schools for all teacher union members, asking for them to support the recalls of Dave Brown and Brian Shannon,

Pay close attention to these signs and how they say the name of the teacher union on them.

The teachers are also hanging these signs with the same political campaign logos inside the Newberg schools, as shown in these numerous photos I have been sent by many individuals, including students,

This is from Chehalem Valley Middle School,

Readers of the Advocate may recall that Chehalem Valley Middle School Principal Casey Petrie claims that BLM is a symbol of “love”, so it should surprise no one she has permitted these signs to be plastered all over her school.

However, as I have said repeatedly pointed out in past articles, this kind of usage of the public schools by the teacher union is illegal per ORS 260.432 Solicitation of public employees.

The Newberg Teacher Union is violating Oregon State law and acting far beyond their capacity as a union. They should be reported to the Oregon Government Ethics Commission for these violations of Oregon state law.

I also think it is rather revealing they are using the black power fist, a symbol of militant Black Nationalism groups such as the Black Panther Party, to advocate for the recall of school board directors.

Can Teacher Union Members Stop The Other Members?

I thought I would leave a small note here: I have been asked by people if its possible for the members of the teacher union who do not support these activities to do anything to oppose the union leaders.

The union can be decertified with a vote by 30% of the members, which will allow the creation of a new union that will no longer have people like Schneider as officers anymore. It would also mean the non-existent union will no longer have much of a case for their frivolous lawsuit against the school board, as well.

The process to decertify a union is outlined on the National Labor Relations Board government website.

There is additional signage hanging in the Newberg public schools as well. These are some of the photos I received,

You may recognize one of these classrooms from a previous video I have shown,

Anyone with additional proof of state law violations performed by the Newberg teacher union should please send me this proof at yamhilladvocate@gmail.com