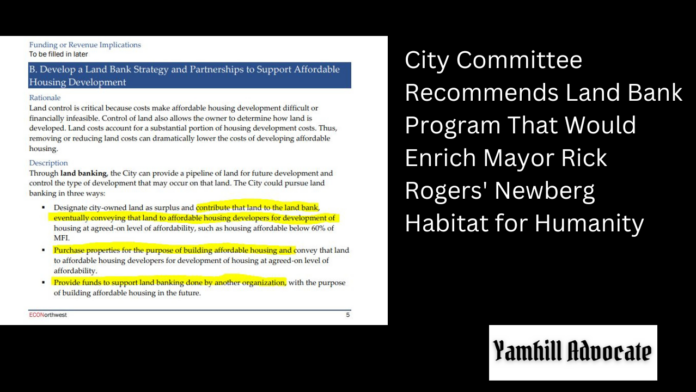 This article should be read as a follow up to my previous article, Newberg Mayor Rick Rogers’ Affordable Housing Conflicts of Interest.

On October 13, 2022 there was a meeting of the “Housing Production Strategy Citizen’s Advisory”, which is a city committee that makes recommendations to City Council on implementation of new policies. Oddly, the committee appears to be engaged in similar if not identical business as the Affordable housing committee so I am unsure of the rational behind its creation but nevertheless an important thing happened during the meeting. You can of course watch the entire meeting for yourself but let me break down the important thing which occurred, and that was a recommendation to the City Council to create a land banking program expressly designed to enrich Newberg Habitat for Humanity, which as I have previously pointed out in prior articles Mayor Rick Rogers is the Executive Director (a paid position) of.

Furthermore, Larry Hampton, who is the President of the Board of Directors of Newberg Habitat for Humanity, is a member of this “Housing Production Strategy Citizen’s Advisory” committee which has proposed this land banking program that will enrich the company he is associated with, which I believe makes this a proposal a violation of state laws prohibiting the use of public office for private gain, as I pointed out in my previous article about his activities as the Chair of the Affordable Housing Committee.

For those who don’t wish to watch the entire video, let me break down what is happening here.

All of this information comes from the packet for the meeting which you can download from the city’s own website.

First, we have yet more proof that City of Newberg under the control of Progressive Yamhill members has inflated the definitions for “low income” so they can use affordable housing programs to subsidize the cost of constructing housing for people that make up to $77,500 a year. This is something I discussed at length in the prior article. They have changed the definitions of low income housing so they can build and sell homes for $300K or more to people who make far above what would be considered by the average person to be genuinely low income, and use city money to subsidize the construction of this housing. This does not legitimately help low income families in Newberg.

Next, you will see they made a variety of proposals that all tie into one another,

I’ve highlighted in yellow the most important things here; Reductions of System development costs (SDC) for anyone building low income housing (meaning they pay less fees to the city to build housing compared to a private developer not partnered with someone like Habitat), Issuing yet another bond to subsidize the cost of building low income housing (which Newberg residents will probably end up paying for from yet more fees tacked onto the water bill), and a recommendation to not add any restrictive covenants to the housing that is build with city money that would ensure the “low income housing” actually remains “affordable” — without this covenant it means that once the homes are developed and sold, they can be resold without any restrictions to ensure the housing remains “affordable”.

What these recommendations all together translates into is that the City of Newberg can provide money to Newberg Habitat for Humanity (a builder of “low income housing”) to construct a home which could sell for around $300K to someone who makes up to $77K a year and that home can then in turn be flipped by the buyer for possibly $500K or more since there is no restrictions to cap the price of the home. That is what this set of things can result in, and I think it may be by design intended to result in this.

You should also take special notice that in addition to not adding any covenants to ensure the long term affordability for the new housing to be built with public subsidization, they are also saying all housing has to conform to Critical Race Theory policies of “social and racial equity”; whatever that is supposed to mean is not clearly defined.

All of this is information by itself is very terrible and obviously not what a legitimate affordable housing program should look like, but unfortunately that is not the worst of it.

The committee also made the recommendation to develop a land banking program that is expressly designed to enrich Newberg Habitat for Humanity.

Once again this information comes from the meeting packet, highlighted in yellow,

Please take special notice that they have expressly pointed out that Mayor Rick Rogers is the Executive Director (a paid position) of the #1 partner for the land banking program, which is expressly designed to allow the City of Newberg to transfer ownership of existing city land to developers of low income housing such as Newberg Habitat for Humanity.

In my opinion this is yet more proof that they are openly using the City of Newberg as their personal piggybank to subsidize the cost of their businesses, in this case under the guise of being “affordable housing”.

Worse, as I pointed out in the previous article, they already have and are continuing to implement policies that create a kind of monopoly for Newberg Habitat for Humanity, designing structures that allow them to tax other rival housing builders and then redirect that tax money to Newberg Habitat for Humanity and any project they are a “strategic partner” on, much like the Peace Trail Village Project, the homeless camp near Veritas School. This is similar to how how the Covid-19 Relief ARPA funds were primarily distributed to Progressive Yamhill associated businesses and how that the Peace Trail Village also had several PY members involved in the project in key roles.

What I have shown you is a plan that will allow the City to purchase land using City money and then transfer the ownership of that land to Newberg Habitat for Humanity, which Larry Hampton is the President of the Board of Directors of, and which Mayor Rogers is the Executive Director of And Newberg Habitat for Humanity is then legally free to build homes using city money and sell it people who make up to $77K a year, and then that person can flip the homes for whatever price they want as there is no covenant for ensuring the homes are only sold to people who are “low income”.

None of this helps genuinely low income people in Newberg but it does sure help Rick Rogers and Larry Hampton, and all those they are involved with financially as “partners” with Habitat.

Oregon law prohibits public officials from using or attempting to use their official positions or offices to obtain a financial benefit for themselves, relatives or businesses which they are associated with if that financial benefit or opportunity for financial gain would not otherwise be available but for the position or office held.

In fact, the Public Official Handbook produced by the State of Oregon expressly uses the example of a paid employee of a non-profit when discussing this ethics violation of ORS 244.020,

Anyone with more information about Newberg Habitat for Humanity officers / board members or other associates engaging in things like this should contact the Advocate with details. Your anonymity will be protected.