Members of Progressive Yamhill held what looked like a counter rally with members waving Antifa, BLM and pride flags opposite of a rally for conservative and moderate candidates for local office; Newberg City Councilor Jefferson Mildenberger, candidate Casey Banks and others stood with the crowd waving Antifa flags. 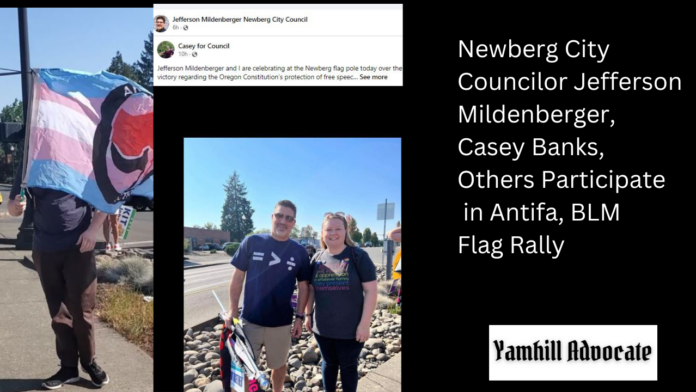 On Saturday October 15th two political rallies took place at the flagpole in downtown Newberg. The two rallies could not have been more different.

The first rally started at 12 PM and featured supporters of several moderate and conservative candidates waving American flags and signs supporting their candidates. Some of the candidates themselves were present at the rally, Newberg mayoral candidate Bill Rosacker, Newberg City Council candidate Robyn Wheatley, Newberg City Councilor Peggy Kilburg and Yamhill County Commissioner Kit Johnson. I interviewed Rosacker and Wheatley while covering the event, which you can watch the full video of below.

The second rally, which I regard as a counter rally, initially formed about an hour and half after the first rally started. The counter rally participants gathered across the street from the flag pole sidewalk island, featured many members of Progressive Yamhill waving the symbols of Critical race theory advocacy; Black Lives Matter signs, Trans-racial Pride flags and even Antifa flags. As the first rally ended their members crossed the street and took over the central flag pole area. Importantly, Newberg City Councilor Jefferson Mildenberger (who is running for election against Robyn Wheatley) was in attendance, as well as Casey Banks, a pastor at Newberg First United Methodist Church who is running for a City Council seat against Peggy Kilburg.

As the full video is long here is the specific portion of the video where the counter rally starts and you can clearly see that a participant crosses over into the island area carrying an Antifa flag decked out in trans-racial pride flag colors. You can also see that after the crowd fully crosses over Newberg City Councilor Jefferson Mildenberger is standing with them, as well as what I believe to be a group of women standing together that includes Kristen Stoller, Newberg City Councilor Stephanie Findley and McMinnville City Council Remy Drabkin; I believe they are the women who are shouting at me in the video.

(Update: According to a source Stephanie Findley was attending a memorial service at Champoeg during this same time. I didn’t get the person who I believed to be Findley on video very well because I stopped recording as the traffic light turned green, but a woman from the back of the crowd that looked to me like Findley came around and started yelling at me as I was driving with the traffic. Her back is visible in some shots of the video. However based on what the source is saying that would not be possible. So far Findley has not contacted the Advocate to refute the content of this article.)

For those who want a better shot, here is one of the participants of the counter rally holding an Antifa flag featuring the “trans racial pride flag colors.

It is very obviously the Antifa logo on the flag.

It is unsurprising that we have these people attending a rally where members wave Antifa flags, since after all they are part of a group, Progressive Yamhill, that organized the funding of Antifa groups attacking police at the Portland federal courthouse during 2020, as I have shown evidence for in prior articles.

On Twitter the Save Yamhill County PAC (which is controlled by Lynette Shaw, a founder of Progressive Yamhill and whose purpose is to support “progressive” candidates in Yamhill County) falsely claimed that I was hanging out with Antifa members when in fact as anyone who watches the video can see, I was actually reporting on the first rally and it was the Antifa flag carrying counter rally members who crossed over and approached me.

Furthermore it is, I believe, rather indisputable that candidates such as Jefferson Mildenberger and Casey Banks were in attendance in the counter rally; here are screenshots from their own Facebook Page campaign accounts,

Despite this evidence. those aligned with Progressive Yamhill have still attempted to engage in gaslighting on social media, notably Matthew Stidman (who is on Newberg’s Affordable Housing Committee) and Cherice Bock (an important member of Progressive Yamhill and current George Fox University professor who participates in Antifa rallies, as I have previously exposed about her in a prior article).

Here is a larger version of the photo I published showing Jefferson Mildenberger in the counter rally, as if anyone who watched the video really needs it spelled out clearer,

I should think by now Newberg residents ought to be completely fed up with the constant attempts to gaslight them by so many city officials. They will literally do something in public for all to see and then blatantly lie about it, attempting to spread misinformation to paint their political opponents as doing the very things they are themselves doing.

Anyone who wishes to learn more information about how Progressive Yamhill candidates have abused their positions and mismanaged the City of Newberg can read my previously published articles,

What Voters Should Know About Newberg Councilor Stephanie Findley

Let us also not forget how they have rewarded their Progressive Yamhill friends with the City of Newberg’s covid-19 relief money, mostly those who own bars and nonprofits that serve common interests. In fact, the donated substantial amounts of money to the Newberg Downtown Coalition that Mayor Rick Rogers and Councilor Elise Hollamon are board members of, and donations were also made to the “Peace Trail Village” homeless camp project built next to Veritas School despite that Newberg Habitat for Humanity (which Mayor Rick Rogers is a paid employee of), Providence Health & Services and the Community Wellness Collective (Elise Hollamon is a paid employee of Providence and she is also the co-founder and President of the Community Wellness Collective) are strategic partners in. These obvious conflicts of interest are explored in a previously published articles, Newberg City Council Spends Covid-19 Recovery Funds On Progressive Yamhill Members’ Private Businesses and Newberg City Council Funds Construction of Homeless Camp Next to School.

Will Newberg residents permit these fringe extremists to continue to transform Newberg into the next Portland and all of its social problems as a result of mismanagement and bad social policies? I suppose we will find out November 8th on election day.

Another dissection of Progressive Yamhill’s going ons. I have gone through an overall awakening the last 6 or 7 years about how our government and country operates and it disgusts me, but I never started to peel the onion on local politics until I found your publication. FINALLY a real news paper that does real investigative journalism, the News Register might as well start including bingo cards at this point.

Anyway, very well done and I really enjoy your work.

All these city council members aligned with the progressive trouble maker groups need to be booted out of office.

Its ridiculous that a conservative/Republican county has a bunch of left wing ideologues hiding behind their nonpartisan positions, while implementing their liberal agenda.

My prediction is many of them won’t be around after a couple of more election cycles.