Oregonians, I Implore You to Vote and Save the State from Indivisible Agents This November 8th

A reflection on the past year of reporting by this newspaper that exposed the activities of Indivisible agents in Yamhill County and my hope for the future of the state of Oregon. 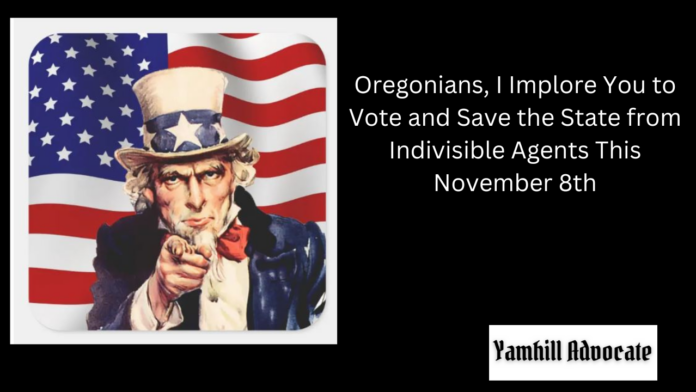 The first article I wrote in what would become the Yamhill Advocate newspaper was published on September 21, 2021. The article was published to my personal blog. Then on October 12th, 2021 I published the expose, “Meet the Newberg, Oregon Mafia Led by Elected Officials and Other Community Leaders” which exposed the Newberg Equity in Education ( NEEd) group. On October 20th I published the 2nd part that exposed the activities of the Progressive Yamhill parent group.

I registered the Yamhill Advocate domain name a few days later, on October 24th. Since that time I have published 144 articles, nearly all of which I wrote entirely myself, with only a small handful of them being op-ed contributions. The research required for these articles has been extremely time consuming and I have published at risk to myself, since I have been the subject of threats both legal and violent as a result of the anger my reporting of the true facts has stirred in those exposed. Nevertheless, as John F. Kennedy once said, there are risks and costs to action. But they are far less than the long range risks of comfortable inaction. I regret nothing and I stand behind my reporting as a service to my hometown and those who live in and around it.

A great deal has changed over the past year since I started reporting on local news. Firstly, a great many people are now aware of the activities of Indivisible agents in Yamhill County organizing harassment of their neighbors to pressure them into complying with their extremist agendas, and they are not as easily tricked by their efforts to organize recall campaigns against public officials. In fact the recalls against Newberg school board directors Brian Shannon and Dave Brown, and County Commissioner Lindsay Berschauer completely failed. Despite efforts to spread misinformation about her, County Commissioner Mary Starrett was also re-elected, too.

Oregon residents will start receiving their ballots by mail on October 18th and the votes are due by November 8th. It is my hope that those members of Progressive Yamhill who still retain political power in cities throughout our county will not be re-elected next month, and that other members of their group will not gain election. I believe I have done everything I possibly can to educate the public and bring their activities out of the shadows and into the light of truth.

It is not necessarily that I wish for the Republicans to win in elections but rather I desire for those who are corrupt, unethical and who do not hold the best interests of all Oregonians to lose. In light of the activities of the Yamhill County Democrat Party and other state Democrat party officials who have supported them in their conspiracies, it is my hope that the Democrats will lose control over the state, city, county and all other aspects of Oregon government. While the Oregon Republican Party is not perfect I do believe most of the candidates for election this year have the best interests of all Oregonians in mind. We need restoration of law and order, we need corrupt officials to be held accountable for their offenses against the people and misuse of public offices for personal gain, and we need to eliminate all of the political extremism and pseudo-science that the Oregon Department of Education is forcing upon the public school system by integrating these fringe political ideas into the educational curriculum. I believe the Oregon Ethics Commission has become largely ineffective as it does not hold officials accountable for obvious conflicts of interest and is not enforcing state laws fairly if the official happens to be an important member of the Democratic Party of Oregon.

If people want the constant warring of Proud Boys and Antifa to end in Portland, if they want violent criminals to be actually held in jail instead of just immediately released back onto the streets, if they want our cities to once again be safe for children to walk and ride their bikes around without fear of being accosted by hordes of drug addicted vagrants on their way to and from school, if they want child predators ejected from our schools instead of encouraged by the Oregon Department of Education to become teachers, if they want the absurdly high tax rates to be lowered so that the generations of people in rural areas can continue to live in the state instead of being forced out to make way for Californians seeking to build McMansion micro-vineyards, if they want to preserve the agricultural industry of Oregon, if they want to just be able to go about their day without fear of yet another state-wide lockdown of businesses when there was no evidence it would stop the spread of an airborne pathogen and which bankrupted small businesses throughout the state, then I suggest you vote Republican this year.

Ordinarily I would not use this newspaper to endorse any particular candidate but given the dire situation Oregon is facing, I believe that Oregon Democrats have become agents of this Indivisible organization and they will continue implementing their social experiments instead of governing justly and fairly. They need to be stopped before Oregon becomes a place no sane person would ever live in, and its natural beauty replaced by overcrowding, miles and miles of homeless encampments down every highway and ever increasing rates of violence, child molestation and murder as a consequence of their failed social policies.

Republicans, I implore you to save Oregon. Only you have the power to do it.

We need to get rid of Mayor Rick Roger’s. When he first campaigned, he would not disclose his party affiliation….he has had a big hand in subverting Newberg as we knew it.