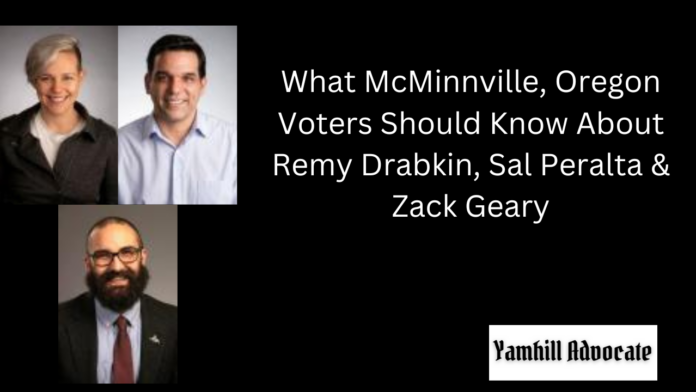 This article is designed to provide quick information for voters in McMinnville Oregon concerning the November 2022 election. Several candidates for office are running for re-election, some unopposed. These candidates are Remy Drabkin, Sal Peralta and Zack Geary.

What voters should know is that all three are members of Progressive Yamhill, a registered chapter of Indivisible.org, which is a nation wide extremist group with numerous chapters across America, with chapters in most large cities. Indivisible supports legalizing all forms of recreational drugs and radical restructuring of rural areas, using urban renewal committees to support the creation of high density housing; essentially, they are pro-welfare state and socialism, and generally opposed to capitalism (which I find to be ironic given the number of people in the group who have greatly profited through private enterprise). The goal of Indivisible groups is to transform rural areas into far left liberal aligned communities that will vote for Democrat candidates. Indivisible chapters also work in cooperation with violent Antifa cells, providing funding and resources to them, as I have shown evidence for in prior articles this is something Progressive Yamhill has done quite extensively.

I have published over 100 articles on the Advocate exposing their unethical, possibly illegal actions and how they deceive voters into supporting causes that support their fringe political agendas.

Here is the proof of their membership in the group,

Sal Peralta’s activities in Progressive Yamhill warrants its own standalone article, which I have previously published that details how the Independent Party of Oregon is in my opinion a front for the Oregon Democrats designed to gaslight voters into supporting Democrats, as Peralta actively participated in threads where members of the Yamhill County Democrat Party discussed how to flip independent voters Democrat.

McMinnville voters should know that even before he was elected in 2018 Geary was offering commission seats to members of Progressive Yamhill in secret and unbeknownst to the rest of the voters in McMinnville. Here is proof for this,

Remy Drabkin’s activities are primarily centered around her LGBTQ activism; for example, she has been extremely involved in organizing the lawsuits against the Newberg school district working as a recruiter for the ACLU to find teachers willing to file lawsuits even before the policy was implemented. For the evidence of this read the article, How the Yamhill County Democrat Party Organized the Lawsuits Against Newberg Public Schools.

Drabkin is also a major player involved in the Wine County Pride events, hosting drag queen shows marketed at children. For more details concerning this activity please read my previously published article, Kristen Stoller Threatens to Sue Yamhill Advocate For Exposing Her, But Here’s The Truth,  A subsection about the importance of drag queens to Progressive Yamhill’s agenda.

Here is a video of a past Wine Country Pride event which featured drag queen shows advertised to children. Remy Drabkin acted as host for the event.

I believe it is unfortunate that some of these people are running unopposed in the November 2022 election. I believe these people do not have the best interests of McMinnville citizens in mind and are solely interested in advancing their extremist agenda. I would highly recommend the voters of McMinnville organize recalls to remove them as soon as possible as they will use their positions of power over the city to continue indoctrinating children into fringe ideologies and dramatically reshape the city into another version of Portland.

For an in-depth article about Progressive Yamhill I published last year, please click here. This article is comprehensive and covers the activities of many of its members over a four year period.