Independent Party of Oregon Is a Front for Oregon Democrats

Evidence that Independent Party of Oregon Director Sal Peralta is loyal to the agenda of Oregon Democrats and that his 'political party' is just a front for Democrats. 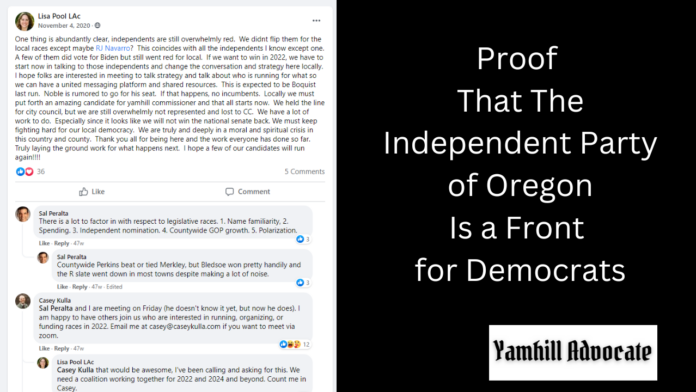 In this article I will show evidence that the Independent Party of Oregon is a front for the Oregon Democrat Party; that is to say, its operations are actually just an extension of the Democrat party and it is not a genuinely independent party.

I want to begin this article with some very important screenshots which I archived from the secret Progressive Yamhill (PY) Facebook group which I infiltrated last year and archived four years worth of social media posts from.

This is Independent Party of Oregon Director & McMinnville City Councilor Sal Peralta commenting on a post within Progressive Yamhill’s secret Facebook group about how they were unsuccessful at flipping independents to vote Democrat. Yamhill County Commissioner Casey Kulla, who is a Democrat, asks to hold a meeting with Peralta about how they can do a better job in the future.

Furthermore the post Peralta and Kulla are responding to was written by Lisa Pool, an acupuncturist in McMinnville, Oregon who in 2020 unsuccessfully ran in the Democrat primaries for District 24.

This conversation alone by itself should more than prove that the Independent Party of Oregon is a front for the Democrats, because why else would its Director be talking about strategy in flipping independents to vote Democrat if it was actually striving to be a genuine political party independent of another?

As I have previously provided evidence, for Progressive Yamhill is an extension of the Yamhill County Democrat Party operations and the group is used to coordinate its volunteer force to perform political activity on its behalf. There are several key pieces of evidence I will show here that demonstrate this is the case.

Firstly, the Yamhill County Democrat party Facebook Page is a member of the group and it invited itself to the group, meaning it had admin powers over the group at one time.

Please take note that the Facebook Page added itself to the group.

What is Sal Peralta doing in a group like this if he’s not actually a Democrat?

Here is another thread where Corvus talks about the purpose of the Progressive Yamhill group.

Actually, let me show you the entire thread this post is from so you can understand Sal Peralta is onboard with all of this, because he’s a participant in this same thread.

Here is the part where Sal Peralta chimes in,

Are you still not convinced that Sal Peralta is really a Democrat? Well, take a look at this then. This is the document mentioned in the last screenshot, posted by Megan Corvus titled ‘PY Volunteers 2020’.

That is to say, here is a list of tasks that Megan Corvus, Recording Secretary for the Yamhill County Democrat party, posted into the Progressive Yamhill FB group requesting that members volunteer to do on behalf of the YCDP during 2020. It appears the YCPD may be using a variation of SCRUM to organize, as this resembles some master lists I have seen in the past, although it would normally be broken down into smaller lists of tasks. If I had to guess, based on my past experience with SCRUM it appears they use a semi-decentralized organizational structure which gives members some degree of autonomy in how they accomplish tasks.

Seem boring? Well here is the point; on the last page, Sal Peralta is listed as a Trainer for the task ‘What Does a City Councilor Do- Panel’. What is the Director of the Independent Party of Oregon doing acting as a trainer for the Yamhill County Democrat party?

By the way, you’ll also notice Beth Wytoski on that same sheet as a Trainer for mayors. Isn’t she supposed to be a Republican? At present she is running for Yamhill County Commissioner and has claimed she is a life long Republican. Do you know many Republicans who help train Democrat volunteers in how to be a mayor? Previously I published an article that showed she has more connections to Progressive Yamhill, too.

Here are some additional posts where Megan Corvus acknowledges that PY is really all about helping the Yamhill County Democrat Party and that it is ‘risky’ for some of their elected officials such as Newberg City Councilor Stephanie Findley to post in it,

Still unconvinced? Here is a post where Megan Corvus asks Progressive Yamhill members to volunteer for a phone bank to call Democrat voters and ask them to vote for their candidates during the 2020 election season,

Unless you want to believe that Megan Corvus, the Recording Secretary for the Yamhill County Democrat Party, is leaking the party resources to non-party members you have to accept that PY is in fact an extension of the Democrat political machine. Why else would she share this information in the PY group if it had genuine Republicans in it who could then contact her party’s voters who hadn’t voted yet and ask them to vote Republican? I doubt that greatly. The obvious conclusion is that PY is an extension of the YCDP and is not a bipartisan / nonpartisan group whatsoever.

Do you accept that Progressive Yamhill is an extension of the Yamhill County Democrat party yet? The evidence is rather overwhelming that this is the case.

At any result, Progressive Yamhill is also deeply involved with the Indivisible movement, which most definitely is a political organization for the Democrat party.

Here is a post about “Progressive Book club” that Sal participated in,

Sal Peralta also apparently believes people should spend half their social security on taxes for a home they built decades ago. It is clear to me that Peralta is among these radical extremists who want long time conservatives to be pushed out of the area by no longer being able to afford to live in rural Oregon anymore.

Here is another thread that shows Progressive Yamhill engaging in YCDP activity,

Proof That Sal Peralta Is Director of Independent Party of Oregon

Sal Peralta has been a member of the Progressive Yamhill group almost from its inception.

Sal Peralta is listed as the director of the Independent Party of Oregon, per its own website earlier this year.

After the publication of my in-depth article about Progressive Yamhill, they updated the website to remove his name but it does not change that he has been an officer for the party for the entire length of time he was a Progressive Yamhill member cooperating with the Yamhill County Democrats in their political activities.

Here is a statement by Sal Peralta in a News-Register article from last year, discussing his role as the co-founder of the Independent Party of Oregon,

Sal Peralta is an active member of Progressive Yamhill, which as I previously reported, is a secret Facebook group of Indivisible movement members who took over the Yamhill County Democrat party.

Here is one of his posts from within this secret Facebook group,

Consequently, the weight of the evidence shows that the so-called “Independent” party is actually just an effort to gaslight unaffiliated party voters in Oregon, because the person who runs the party is completely in league with the Democrats.

I mean, how else do you explain this post from him last September in the Progressive Yamhill group, where he asked its members to apply for a McMinnville City council committee? Progressive Yamhill frequently uses the positions of its elected members to pack committees with its membership, who all work toward the Indivisible movement goals using these positions in local government.

By the way, this post is also evidence of McMinnville City Councilor Sal Peralta violating the Civil Rights Act of 1964. You can’t give preferential treatment to choosing committee members based on their gender and race. Yet, here he is, the supposed champion against ‘racism’ and ‘sexism’, being a sexist racist.

This is what Critical Race Theorists do in government positions.

This is why they must be exposed, so they can be stopped!

Their goal is to undo all of the social progress of equality that has been hard-fought and took so many sacrifices to obtain.

They will destroy our civil rights if they are allowed to continue to gain traction in our government by gaslighting voters using numerous PACs to play a kind of shell game to obscure their true affiliations and deceive voters.

They are not heroes and they do nothing heroic, because in actual habit, they ruin the lives of other people, turn neighbors who once were friendly into enemies, and create a twisted racially driven power dynamic in mixed-ethnicity relationships and families. They are re-igniting the last burning embers of racism in America, which was on the verge of being almost completely eliminated from our society until black separatists used our colleges to indoctrinate students into CRT using our tax funded institutions of learning. They required all teachers to learn CRT and so their ideology has rapidly spread throughout America, since the only people who get to graduate are those who adopt its ideology. I cannot fix this broken part of the system with this article, it’s going to take politicians using the Government Speech Doctrine to implement legislation designed to eliminate all public funding and government contracts to colleges that teach CRT. This is the only way I can see for how this cycle can be quickly ended.

It will take a lot of effort to rid these crazed corrupt politicians from our government in Oregon, because they have taken over most branches of it. For now what I can do is expose this particular cell of corrupt officials who been sabotaging our local government at the city and county level, and in doing so, bring this conspiracy to an end. Their network will be useless once they are exposed for what they are and who is part of it, and the crimes they can be held accountable for their behavior with the criminal and civil court system.

Here are additional posts of Peralta from within the PY group which are insightful,

As I have shown overwhelming evidence for in previous articles, the Progressive Yamhill group and its subgroup Newberg Equity in Education (NEEd) organized the recalls against Newberg School Board Directors Brian Shannon and Dave Brown last year. Here is how the Independent Party of Oregon was used to assist these efforts.

The Independent Party of Oregon used a PAC, Independent Oregon, to involve itself in the Newberg public schools recall election.

Here is the proof the PAC is associated with the Independent Party of Oregon,

In the past, this same PAC has paid Sal Peralta’s consulting company, Peralta Technical Service, around $20,000 as well.

The Independent Party of Oregon operations are a fraud designed to trick voters into supporting Democrats. That much is clear by Sal Peralta’s activities within a Facebook group that exists solely for mobilizing volunteers for a Democrat party chapter in Yamhill County and by their involvement in actual political campaigns organized by this Democrat chapter such as the Newberg School Board recalls last year.

The evidence is overwhelming. They have defrauded voters and should be held accountable. All of the money donated to the party was obtained fraudulently and all that was spent by it should be considered to be on behalf of the Yamhill County Democrats and should have been reported as such.