On October 10, 2022 a community forum was held at Newberg High School about the Community Wellness Center. Elise Hollamon and Jeri Turgeson answered several questions asked by Yamhill Advocate editor Carey Martell. During these answers it was admitted the Wellness Center is providing "gender affirming care" to students. 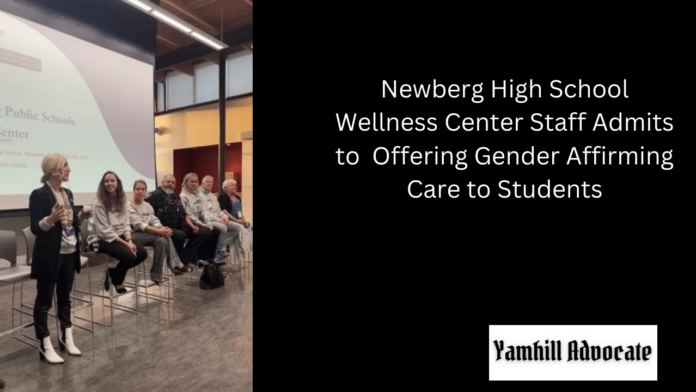 On July 5, 2022, I published the article The Truth About the Newberg High School Wellness Center where I showed evidence for the involvement of Progressive Yamhill / Newberg Equity in Education members in the Wellness Center, a private medical clinic operating out of the Newberg High School. The clinic is operated by the nonprofit Community Wellness Collective in conjunction with Providence Health and Services.

On Monday October 10th at 6 PM PST a town hall style community forum was held at Newberg High School where a panel of those involved with the Wellness Center presented a slideshow presentation and offered to answer questions of the community. The entire panel was livestreamed and can be watched from the Newberg Public Schools Facebook Page,

I personally attended the panel and took this opportunity to ask Jeri Turgeson to clarify what she meant in a post she made in the Progressive Yamhill group in September 2021, in a thread related to the firing of a former teacher aid Lauren Pefferle for supposedly wearing “blackface” (which as I reported last year was not a correct representation of the events. I believe Pefferle’s firing was an intentional misrepresentation by Progressive Yamhill members in the school district who used the incident to drum up support for their recall of school board director Brian Shannon by suggesting the Newberg schools were full of white supremacists; claims which the posts I published from the Progressive Yamhill group indicate the people making these claims were fully aware was not true).

In answering my questions Turgeson admitted that the Wellness Center is providing gender affirming care to students in the Newberg High School, although Turgeson and Hollamon disputed whether this care should be considered ‘treatment’. They made the claim that creating an “affirming environment” and engaging in family counseling sessions with the student and their family is not a form of treatment for gender dysmorphia. During my questioning I also challenged the accuracy of their presentation slides that claimed the Wellness Center does not provide “complex psychiatric care”, which I believe is an untrue statement as providing treatment for gender dysphoria is exactly that, since this condition is a rare and abnormal psychiatric condition that is complicated to both diagnose and treat.

Personally I do not agree with the semantical argument they presented about the definitions they used for “care” and “treatment” being different things. This is because “gender affirming care” is in fact a group of treatments for the psychiatric condition of gender dysphoria (also known as gender dysmorphia and transgenderism identification). Creating an affirming environment is indeed a form of treatment, as it is a form of therapy. While hormone therapy and surgeries are a kind of treatment prescribed for this condition it is not the sole method of treatment.

In fact, on the American Psychiatric Association page about gender dysphoria, the kind of “care” that Turgeson described is expressly mentioned as a treatment for gender dysphoria, which is why I believe Turgeson and Hollamon are being completely disingenuous about their claims to not be providing treatment through the Wellness Center solely because they are not providing hormone therapy drugs “onsite”. Their definitions for “care” and “treatment” do not match the way everyone else in the profession uses these terms.

Turgeson also did not say they were not making referrals to patients on where they could obtain puberty blockers and hormonal drugs outside of the “onsite” clinic. It was only said they were not providing them “onsite” because the clinic lacked a pharmacy, which I find to be another disingenuous statement as small outpatient clinics such as the Wellness Center never have onsite pharmacies and provide patients prescriptions which must be fulfilled at a third party pharmacy.

Furthermore, I believe the answers that Turgeson provided do not necessarily mean that prescriptions written for students by Wellness Center staff has never occurred, nor that staff are not presently providing information to students on where they can get a prescription fulfilled without their parent’s knowledge or consent, since Oregon law ORS 109.640 permits minors 14 years of age or older to obtain treatment for outpatient diagnosis or treatment of a mental or emotional disorder such as gender dysphoria.

To make it easier for readers of the Advocate to see the segment of the video where my questions are answered by Turgeson and Hollamon, I have uploaded a video where I provide subtitles to the section of the video I spoke during, as the sound on the original video source was not very audible even after I boosted the volume.

The first 7 minutes of the video show the panel segment where I asked questions, with the remainder of the video featuring my thoughts on the answers I was provided.

To summarize, I did not find the answers provided by Turgeson about the reasons why she made the post to be accurate. I also found her answers to be intentionally long-winded word salad designed to obscure what was meant from the average person unfamiliar with the terminology she was using. Instead of providing short and direct answers to my questions, Turgeson went on unrelated tangents, such as talking about gender conversion therapy, which was not something I asked about. At one point Holloman interrupted my questions to go on a tangent claiming that before we could go further in the panel, I should admit to creating so-called “pain” in the community as a result of my reporting of the facts about the Wellness Center, which wasted valuable time which could have been used to answer these important questions that parents want to know about the Center so they can make informed decisions for their children.

In regards to the posts I was quoting her from, Turgeson claimed the Facebook group thread was related to racist bullying students had experienced; in truth the thread actually had nothing to do with this at all. The thread was actually about the termination of Lauren Pefferle. No student ever witnessed Pefferle the morning she was fired from the district, as she had been sent home prior to the school opening to permit students entry.

As I reported on September 24, 2021, Pefferle stated in an interview with Lars Larson that she was dressed as Rosa Parks for a history themed class, and the incident was blown out of proportions by other faculty as Pefferle was not wearing blackface theatrical makeup.

For clarity this is the thread and posts I inquired about at the panel,

While my rebuttal during the video is lengthy, I encourage readers to watch the video I edited in its entirety for the rest of my thoughts about the kind of therapy that is being offered at the Wellness Center. While some people have commented on previous articles pointing out that I am not a licensed therapist to discredit my viewpoints, I strongly believe my opinions are backed by scientific literature from evolutionary psychology, which is the field of psychology that integrates research from evolutionary physiology and evolutionary biology in development of its theories, making it the most scientifically accurate of all fields of psychology at present. By contrast “gender affirming care” was pioneered by the discredited John Hopkins professor John Money who admitted to fabricating his research results after his patients came forward to expose him.

It was not that long ago that psychiatrists regarded procedures such as lobotomies to be effective and evidence-backed treatment; we now know today that it was complete quackery and the doctors were actually harming their parents in irreversible ways for profit. I believe that history is repeating in regards to this pseudo-scientific “gender affirming care” treatments. There is unfortunately a long history of the field of psychology abused to serve political agendas and I believe this is yet another example of it occurring, as gay rights movement activists have appropriated the field of psychology to legitimatize their lifestyles while ignoring the scientific method. There is zero scientific evidence that a human can be “born the wrong gender” or that “gender affirming care” is the only effective treatment for gender dysphoria — the existence of a significant number of people “de-transitioning” after having gone through the full range of gender transitioning treatments after realizing the treatments were either ineffective or that their dysphoria was related to other issues, and that the life expectancy of a transitioned person is significantly lower than the average, with the #1 cause of death being suicide proves this “care” is a pseudo-science that does not actually treat the condition. Which should surprise no one because in no other type of body dysmorphic disorder is the recommended psychiatric treatment to indulge the delusions causing the dysphoria.

For more information about how “gender affirming care” is a pseudo-science that has its origins in the work of the discredited former John Hopkins professor John Money who admitted to fabricating his research after it led to the suicides of his patients, please read my article Newberg Schools Indoctrinate Children Into Pseudoscience Designed to Change Children’s Sexual Identity.

One wonders why Providence Health and Services is permitting its employees to provide “gender affirming care” to students inside a high school when, as a Catholic institution, such treatment violates the official policies of the Catholic Church and is therefore inconsistent with its teachings? I believe it is worth noting that Elise Hollamon is the President and co-founder of the Community Wellness Collective nonprofit which oversees the Wellness Center while she is also an employee of Providence who oversees programs that Providence offers through the Center, which raises several ethical red flags in my opinion.