In this article I publish my evidence for my belief that the Wellness Center operating in the Newberg High School is a front for Progressive Yamhill agents to push their extremist political ideology and agenda. 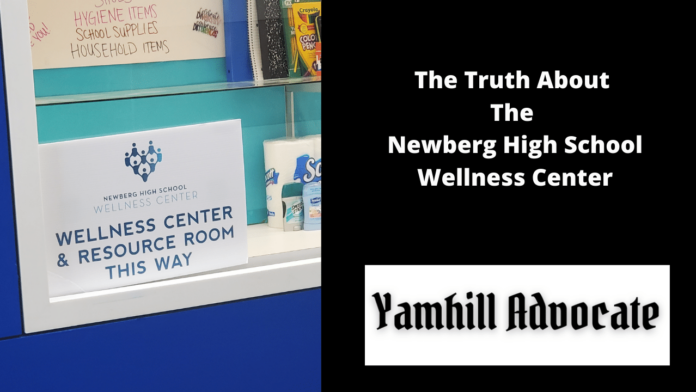 As readers of the Advocate will know I have been investigating the activities of Progressive Yamhill and their subgroup, Newberg Equity in Education in the Newberg Public Schools District as part of the Newberg Schools Saga. One of their central activities seems to involve the Wellness Center in the Newberg High School campus, as I had mentioned in several past articles such as this one. I highly suggest you read these articles if you have not done so, as I will not be reposting the same information again in this article, so I can focus on providing new information.

As many people may be aware, the Newberg Public Schools District is currently in the process of tearing down the old Building J and replacing it with a new building that will have a large facility dedicated for operating what is called the Wellness Center, where it is claimed that students can receive specialized mental health counseling services through a joint agreement between Yamhill County, Providence Hospital and the Oregon Health Authority. However, as I have reported in past articles, it’s my belief that the Center is actually controlled by Progressive Yamhill and its primary purpose is to indoctrinate troubled, at risk youth into radical Marxist ideologies and encourage them to identify as transgender.

In an effort to ascertain the truth and find concrete facts about its operations, several months ago I filed public records requests with the school asking for more information about the Center, and as with my efforts to obtain other public records from the school district, these requests were obstructed by school staff and representatives.

Then again, on April 22nd, Shanna Andres repeated these claims with a more elaborate ruse,

I challenged these claims by pointing out some of the information I am publishing in this article. In response to my reply, Lisa Freiley, an attorney representing the Newberg Public Schools District, responded with the following,

In response to this, Shanna Andres sent me an estimate of over $400 to fulfill the public records request on some, but not all, of the documents about the Center which I requested,

I believe this amount was intentionally inflated by adding new kinds of fees to the public records request that were designed to discourage me from paying for the emails. At this time I have an open complaint filed with the Yamhill County District Attorney’s office against the school district for this unprofessional behavior I believe is designed to obstruct the release of the information I have requested.

Ironically, despite these representatives of the Newberg Public Schools District profusely claiming to me that there is no direct relationship between the Community Wellness Collective and the Newberg High School Wellness Center, on June 1st, the Newberg Graphic published an article written by Megan Stewart titled “School District says Wellness Center will be completed this fall“. The article contains information provided by Gregg Koskela (the bond manager and school district communications director) about the new building that the school is building for the center, and in the article it is admitted that the Center is an extension of the Community Wellness Collective.

Who Funds the Wellness Center?

Based on my research the Center has received funding from a variety of sources, ranging from the Austin Family Foundation, Oregon Health Authority and Providence Hospital.

Furthermore, the Wellness Center also has some funding and support from Yamhill County via the Health and Human Services Department, and this department also provides some behavioral specialists who meet with students inside the Center. One of these people is Taylor Carlstrom, a social worker who has her own office she shares with Robert Morris.

Taylor Carlstrom is apparently a believer in the fringe pseudo-scientific ideologies of Dr. John Money, as she lists her gender pronouns on the Healing Haven website (a private practice she also works at),

According to her own resume, Taylor is not a specialist in abnormal psychology; she is a social worker. Consequently she lacks the proper education to provide mental health counseling to students about these kinds of mental health problems, yet somehow has ended up in this role in the Center.

As for Robert Morris, he is also employed by Yamhill County Health and Human Services. At this time I have been unable to ascertain his professional credentials.

Another employee listed on a door is a Silvia Hanson, who is a Substance Use Counselor employed by Yamhill County Health and Human Services. At this time I also don’t know her specific credentials either.

I believe it is very important for me to point out that the Director of Yamhill County Health and Human Services, Lindsey Manfrin, is a member of the extremist group Progressive Yamhill, which can be seen in the list of all members whose name contains an ‘M’. You can also find her in the master spreadsheet I created of all Progressive Yamhill members from last August.

First of all, let’s just get this out of the way. Kristen Stoller herself works out of the Center. As proof, she has a wall folder bin. I captured these photos myself when I visited the Center several months ago.

You can see the wall folder bins through the window of the Center, and this is a closer photo of them, clearly showing that Kristen has her own.

If you had any further doubts, there is an award that was presented to the Community Wellness Collective that sits on one of the shelves in this same office,

It doesn’t make any sense for this award to be in this office if the Newberg High School Wellness Center has nothing to do with the Community Wellness Collective. This actually proves that my assertion that the Wellness Center is used as office space by the nonprofit is accurate, and that they primarily operate the Center inside the school.

Furthermore, the Community Wellness Collective advertises its pamphlets inside the center as well,

Lastly, in a video created and uploaded by Kristen Stoller herself she expressly says the offices are for her nonprofit,

Consequently, we can see in the actual operations of the Center that the Community Wellness Collective is deeply involved.

The assertion by Shanna Andres and Lisa Freiley that the Community Wellness Collective nonprofit is a totally separate thing from the Wellness Center is not accurate at all.

As I have mentioned before, it has been claimed by several concerned parents that the staff in the Wellness Center are providing “therapy” to kids for transgenderism. I have also found these social media postings from within the NEEd Facebook group where Kristen Stoller, Elise Yarnell Hollamon and Jeri Turgesen (who works at Providence Medical Group Behavioral Health and posted as Jeri Frankenburger) admit the Wellness Centers provides “gender affirming care”, which is a buzzword for

As you can see, Jeri Turgesen said “gender affirming care”, which is a code phrase for John Money’s theories. This is something anyone can Google to verify for themselves,

“Gender affirming care” is yet another Orwellian double-speak term used by these fringe groups. Much like “anti-racist” does not actually mean to be opposed to racism when they say it, “gender affirming care” when used by these fringe cultists actually means to put kids on cancer treatment drugs (which they claim are “puberty blockers”) and to perform “sex reassignment surgery”, which mutilates a child by removing their sex organs. Both of these things separately lead to sterilization of the children, and in the case of the cancer drugs misleading called “puberty blockers”, the children and their parents are often not told that using these drugs meant for treating breast cancer can cause the children to become permanently sterile even if they take hormones later to trigger some of the effects of puberty. Interfering with the natural process of puberty has serious health side effects and is in my opinion, completely unethical and ought to be illegal. It’s child abuse, in my view.

So, it is clear by their own internal communications from their secret Facebook group that Stoller and her accomplices are using this private healthcare clinic that operates inside the Newberg schools as a way to indoctrinate children into a confusing framework developed by a man (John Money) who was revealed to be a complete fraud, and who exploited children for his financial benefit. In a prior article, I’ve written about John Money and his fraud in detail; it’s beyond dispute that he was a fraud, and we are still dealing with the long term consequences of that fraud because people like Kristen Stoller are using his nonsense to indoctrinate children for her benefit.

Furthermore, as I published in my lengthier spotlight article about the activities of Kristen Stoller, the Community Wellness Collective Facebook Page has published numerous social media posts that advertise everything from drag queen shows to clubs where “LGBT” youth can meet other gay adults for so-called mentorship, as well as promotion of events like Wine Country Pride (another of Kristen Stoller’s projects) which have drag queen shows for children to watch.

For a list of some of these posts, please click here and read the previous article about Kristen Stoller’s activities.

While both the Newberg Education Foundation and the Community Wellness Collective have Kristen Stoller registered as their principal, it is my belief Kristen operates these groups for the benefit of the social activist group she is a member of, as one of the schemes for the group to change the “culture” of what voting looks like in Newberg, Oregon by grooming the youth into fringe ideologies. This agenda is something she mentioned during the Yamhill County Democrats meeting back in November,

There are several posts from within the NEEd Facebook group that indicate the Community Wellness Collective is not the sole brainchild of Kristen Stoller and Elise Hollamon, but is in fact a joint effort by the Progressive Yamhill / NEEd group members to indoctrinate students and school employees into their fringe ideologies.

For proof, consider that the Newberg Education Foundation website lists the Community Wellness Collective and the Center as one of their projects,

With that in mind, let us look at a social media post by Beth Woolsey from July 13, 2020 that was made inside the NEEd group.

I believe that by this point of the article I have shown sufficient evidence that the Wellness Center operating in the Newberg High School is directly controlled by the Community Wellness Collective, and that the Collective itself is controlled by Progressive Yamhill Indivisible.org agents, who have leveraged their social positions to create and provide funding / resources to the Center. It is my belief based on the available information that their main objective in operating the Center is to use it as a foothold inside the Newberg School District to promote their radical ideologies to students.

Again, we have the involvement of multiple Progressive Yamhill members, most importantly,

This is not a coincidence.

At this time the Newberg Public Schools District has still not fulfilled my public records request for the email communications related to the Center and other information I requested several months ago. They are also still planning to construct a new Center.

The Center is another grant funded 501c boondoggle paid for by Oregon and Yamhill County tax payers. Newberg City Councilor and Providence employee, Elise Yarnell, increases her prestige among Progressives with the creation of the center. She also gives jobs to friends and insures her own further 501C money stream.