Evidence exists that teachers in the Newberg school district are still refusing to comply with the results of the Newberg public school board vote to ban divisive political symbols from the classrooms. 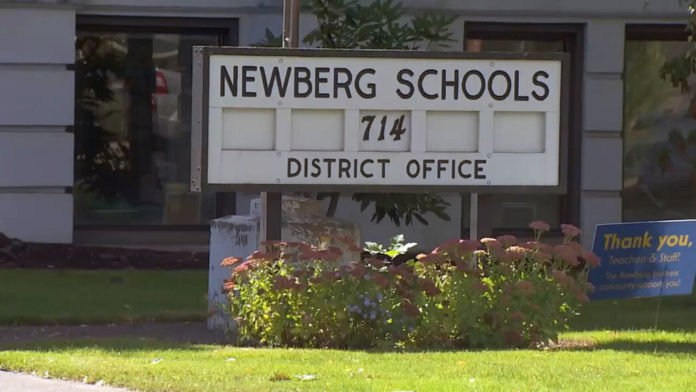 Recently, the Newberg Public School Board voted to ban politically divisive symbols, such as the Black Lives Matter and Pride Flags from use in classrooms in all schools within the district. As previously reported, a group called Newberg Equity in Education has actively worked to undermine the ban. The group’s membership includes many of the school faculty in the school district.

Anonymous sources have sent the Yamhill Advocate the following tips showing evidence that the ban is not being complied with by teachers in the district.

As reported by one source, presently at Chehalem Valley Middle School, Room 104 the following sign is displayed in the classroom in violation of the policy,

According to the source, this is one of the Special Education classrooms.

The following was also posted into one of the community Facebook groups,

According to the source, the classroom belongs to Debbie Tofte, a language arts teacher at Chehalem Valley Middle School. The sign says ‘Black Lives Matter’. As previously reported in Meet the Newberg, Oregon Mafia Led by Elected Officials and Other Community Leaders, Debbie Tofte is a member of Newberg Equity in Education (NEEd), the group of teachers and parents in Newberg, Oregon working to implement Critical Race Theory into the Newberg public school district. Newberg Equity in Education also orchestrated a campaign of harassment and intimidation of Newberg school board directors Dave Brown, Renee Powell, Brian Shannon and Trevor DeHart in an effort to bully them into resigning from their elected seats.

As mentioned in a previous article, Everything You Need to Know About the Newberg School Board Lawsuits That The Newberg Graphic Isn’t Telling You, Debbie Tofte is among the Newberg Equity in Education members currently being sued by the school board directors for their organization of the harassment.

According to another source, when a Newberg district teacher was confronted by a student about her Black Lives Matter sign still hanging in the classroom despite the ban, the teacher ridiculed him for his gender,

Also as previously reported, the lights in a hallway at Mabel Rush Elementary school have also been arranged in the colors of the Pride flag rainbow and from my understanding are still arranged this way.

It seems clear the ban is not being complied with by teachers. Time will tell what potential consequences this brings for the teachers accused of violating the policy.

This teacher needs to be reprimanded immediately, just like the one who painted her face. Equal treatment.

The Principal at Ewing Young has a BLM sticker in his office and the office secretary has a pride sculpture on her desk. And why are recall notices in all of the teachers boxes and on the wall in the teachers lounge? Why were the all the kids lined up in the hallways today with signs, they didn’t create, to tell the superintendent (whom they’ve never met) goodbye and they’ll miss him, without notifying the parents beforehand? He was fired because he went against the mandates from his authorities and should not be worshipped like he’s a sacrificial lamb. This is not an issue to bring our kids into and trying to get them to feel sorry for, “Dr. Joe”. (he told the kids to call him that)

I would appreciate if you could send me proof of these things.