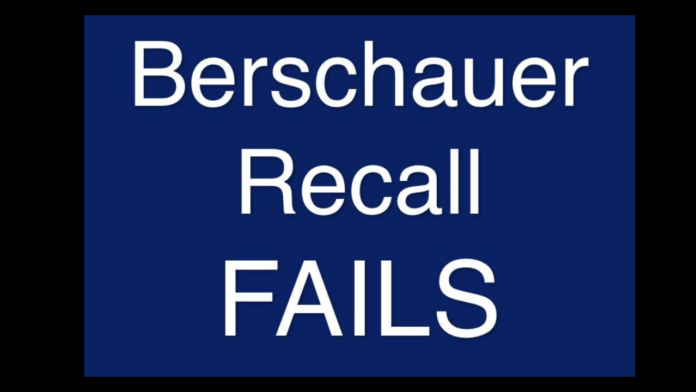 The campaign to Recall Yamhill County Commissioner Lindsday Berschauer has failed to acquire enough valid signatures from county residents to move to the next stage, effectively ending the matter.

“Oregon’s petition process is an important part of how citizens engage with government, but the process has clear rules for how to gather the signatures, and then how they are validated. After a thorough and fair accounting of the recall signatures the petition has failed”, said Commissioner Lindsay Berschauer.

Berschauer noted that a county recall hadn’t happened in anyone’s recent memory, so guidance from the Secretary of State’s office was necessary and critical to ensure a fair process for both sides. “I appreciate the guidance that Secretary of State’s Elections Division provided our county clerk so that the validation process was fair, even-handed, and without bias.”

Berschauer expressed concern that “Save Yamhill County” has targeted the county clerk during the signature validation process by making unsubstantiated accusations of misconduct. “Brian Van Bergen has impeccable character and high ethical standards, and I think it’s a shame that certain individuals in our county have projected their frustration about failing to follow well-defined petitioning rules onto him. I believe Mr. Van Bergen conducted his review by the book and with constant guidance from the Secretary of State’s office.”

“Save Yamhill County” filed the recall petition last August and included false claims about Commissioner Berschauer’s voting record over the past year. Notable red flags during their signature gathering process included an attempt to send volunteers to a private funeral service and asking to gather recall signatures during such a private time. Additionally, Save Yamhill County leader Lynnette Shaw paid nearly $1,000 for a public records request in an attempt to exploit sensitive information about a female victim constituent Commissioner Berschauer was assisting. The attempt to discredit Berschauer failed when the records revealed no wrongdoing, but the incident brought further stress to the female victim.

The “Save Yamhill County” effort morphed quickly from a loose grassroots effort to a full-board campaign operative effort. A Portland-area Democratic signature gathering firm brought in over 16 out-of-area signature gatherers and was paid nearly $17 per signature (roughly $15,000).

Voters throughout the county reported to Commissioner Berschauer that the Portland-area paid gatherers were using smear tactics to bully people into signing the petition.

“Throughout this divisive process, it was my hope that the truth would shine brighter than the lies being told,” said Berschauer. “I am so grateful for the hundreds of friends and supporters we had throughout the county correcting misinformation and encouraging voters to contact me directly with their questions. I also want to thank my incredible volunteer team who gave their time to observe the signature verification process over the past week and ensured the process was fair, accountable, and transparent. It is an honor to continue to serve Yamhill County.”