Missing campaign signs opposing the recall of School Board Directors Brian Shannon and Dave Brown were recovered by police in a nearby resident's yard. 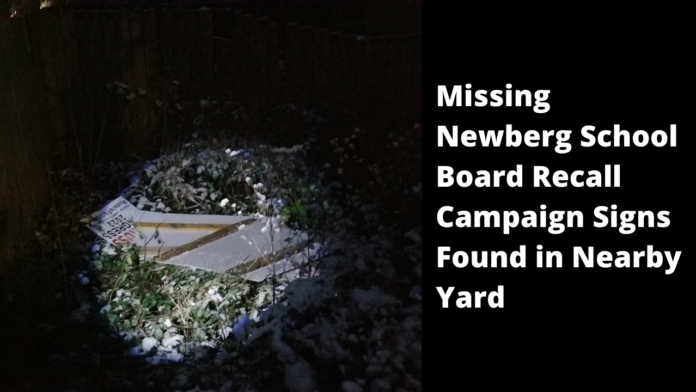 In past articles I reported that members of Newberg Equity in Education had engaged in theft of school board election campaign signs last spring. It would seem the unlawful removal of campaign signs is also occurring during this recall election cycle as well.

The Yamhill Advocate has received several photographs that provide evidence that campaign signs were unlawfully removed from across the Providence Hospital on Highway 99W. The photographs were taken by a Mr. Jon Rotter, one of the volunteers who opposes the recalls against Brian Shannon and Dave Brown. Rotter said that he noticed signs were missing at the site which he had placed there, with only ‘Vote Yes’ recall signs now remaining on the snow covered hill.

Inspecting the site to replace the missing signs, Mr. Rotter noticed footprints in the snow that led directly to the front yard of a nearby house.

Mr. Rotter looked into the backyard of this residence, as it had a large wooden fence that was publicly accessible, and Rotter discovered a pile of signs, as shown in this photograph that he provided to the Advocate.

A campaign sign advertising David Russ for Congress is also clearly visible in the pile of signs in the backyard; Russ is currently campaigning for nomination on the Republican primary ticket.

Mr. Rotter contacted the police and asked them to come to this residence to recover the signs. While the resident of the home claimed to Mr. Rotter that he had no knowledge of the signs in his backyard or how they got there, it was confirmed that the signs were indeed those belonging to the PACs which are opposing the recall against Brian Shannon and Dave Brown. A large pile of signs from the backyard was recovered by Newberg police and returned to Mr. Rotter.

Mr. Rotter provided me with the address for the residence, and while I will not publish this address, I will say that I was able to determine that a Mr. Andy Moser resides there, and his online photographs identify him as the same individual that spoke to Mr. Rotter when the police came to recover the signs from the residence.

As there was no concrete evidence that Andy Moser had taken the signs, police did not file any criminal charges against him, and at this time I have no further evidence to provide which would prove that Andy Moser did take the signs. All that is known for certain is that there was a track of footprints back to his front yard and that the signs were recovered by police from his backyard and returned to Mr. Rotter for restoring to the original site they had been taken from.

Mr. Rotter also pointed out to me that yard signs asking people to vote “Yes” on the recall of Brian Shannon were visibly displayed at Andy Moser’s residence, the same kind which were on the hill.

Mr. Rotter has provided the following statement to the Advocate he would like for the public to hear,

I trust that the Citizens of Newberg can see that this is a clear cut case of someone involved with the pro recall organization, intentionally taking and vandalizing our “VOTE NO on RECALL” signs, and replacing with their signs.”

If anyone has any information on the theft of campaign signs, they should contact the City of Newberg police.