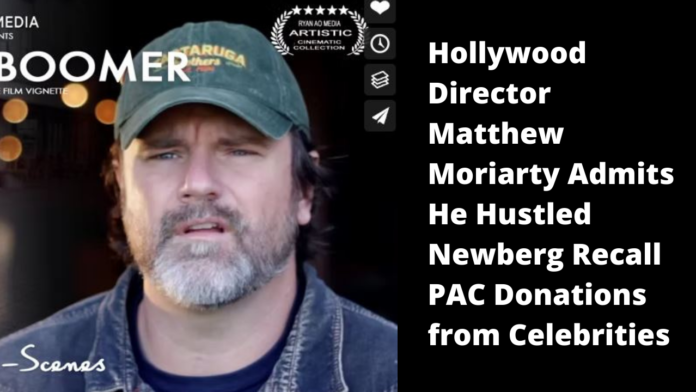 In November, in the article Hollywood Actors Justin Simien and Rosario Dawson Donate To Racist Anti-American PAC in Newberg, Oregon the Yamhill Advocate reported that several high-profile Hollywood actors such as Justin Simien and Rosario Dawson have donated money to the Recall Brian Shannon political action committee (PAC), which as the Yamhill Advocate has reported, is ran by a group of self-declared racist seeking to indocintrate children into racism using the public school system.

The article mentions Hollywood film cinematographer and film director Matthew Moriarty (whose IMBD credits are here) and his family are a supporter of Newberg Equity in Education (NEEd). His wife Ingrid Moriarty is a very active member of the group, whose mission statement clearly says that it exists to push Critical race theory into the Newberg school district. In fact, Ingrid Moriarty was with Kristen Stoller when they both met New York Congresswoman Alexandria Ocasio-Cortez during her half-day visit to Newberg in September to meet with Newberg Equity in Education activists.

I now have an update on this story.

A statement by Matthew Moriarty was published in the Yamhill County News And Discussion Group on Facebook where Moriarty acknowledges that he asked these Hollywood celebrities to donate to the recall campaigns he and his wife are involved with,

I asked Tiffany Olea, the person who posted Moriarty’s statement into the group, where she got this statement from and she refused to say. However, Olea is a publicly vocal member of the Newberg Equity in Education (NEEd) group and supporter of the recalls, and other prominent members of NEEd such as Kristen Stoller also participated in the thread, confirming its legitimacy.

So, that is an acknowledgement that Moriarty is directly responsible for hustling money for the political action committees (PACs), asking millionaire Hollywood actors to donate to a non-partisan school board recall in a small rural town they have nothing to do with.

Furthermore, as the “Senior Strategist and Communications Director”, it seems clear that Moriarty is using his Hollywood connections to produce the TV commercials for the recall PACs as well.

Doesn’t that seem rather excessive for a school board recall in a district that only has around 30,000 residents?

Moriarty claims that because he has lived in Dundee for several years this entitles him to solicit Hollywood actors to donate money to his ideological agenda, claiming they are just his “coworkers” — but the vast majority of residents in Newberg, Oregon are not coworkers to millionaires who can donate thousands of dollars to fund the activities of his fringe far left extremist group and bulldoze over the campaign efforts of local residents to oppose the recall. According to US Census data from 2019, the average household income in Newberg is only $64,202, with the average individual earning $28,775 per year. The amount that can be raised by local residents wishing to retain the school board directors they voted for, is very limited by comparison.

While it does indeed seem Moriarty has lived in Dundee for some time (his “directorial debut” was shot at Tina’s Restaurant in Dundee, OR, as detailed in the documentary, The Baby Boomer, Behind the Scenes, Matthew Moriarty Directorial Debut, which he seemingly has produced about himself) I don’t see why owning one home in Dundee while actually spending most of his time working in California entitles him to leverage his professional network to fund his social activism in a town he is a recent arrival to.

Recently, the Oregon Catalyst newspaper published an article, BIG MONEY IN NEWBERG TO PUSH SMALL TOWN RECALLS, which points out that the political action committees formed by Newberg Equity in Education ( Recall Dave Brown, Recall Brian Shannon, and Voices of Newberg) all share the same address on Southeast 20th Ave in Portland. It is clear these groups are being funded by outsiders to the community, which Moriarty most certainly still is. His values do not reflect the majority in the town of Dundee or Newberg.

Just because he bought a house a few years back in Dundee does not entitle him to join a radical extremist group like NEEd whose mission statement is to indoctrinate children in the schools in racist ideologies like Critical Race Theory and whose leaders have publicly stated their goal is to exploit the kids so that when they graduate and become voters, they will help change the “voting culture” of Newberg.

These people are scum who donated to this woke BS. You don’t live their stay out of their politics. Hollywood will not dictate their poor lifestyle choices. This is pure socialism led by the high and mighty whose lifestyle won’t change. Wake Up.