Yamhill County Commissioner Casey Kulla uses social media to intimidate Newberg Police into bending to the will of the conspiracy he is part of. 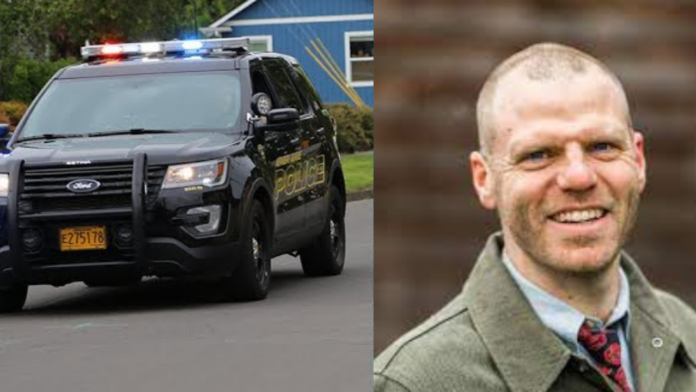 The saga of Yamhill County, Oregon continues yet again.

Yesterday on December 4th, Yamhill County Commissioner Casey Kulla (who is also running for the Democrat nomination for Governor) published the following tweets on Twitter,

According to Patrick Johnson’s profile, he lives in Newberg.

So, it is clear that Casey Kulla is talking about the Newberg-Dundee Oregon Police Department in his posts.

Now, having read his tweets with no further context, you might assume Casey Kulla is talking about real threats facing someone that the police are refusing to act on, right?

He’s not. Casey Kulla is being incredibly misleading and disingenuous in these tweets.

What Casey Kulla is actually talking about is police refusing to give into the unreasonable demands of the owners of Pollinate Flowers to implement Critical Race Theory aligned policies that allow groups like Antifa to do whatever they want to harass and intimidate political opponents,

Now you might wonder why Casey Kulla would be championing Pollinate Flowers cause, but it’s really not a mystery to those who have read my prior article, Part 2: Meet Progressive Yamhill, the Parent Group of the NEEd Mafia Seizing Control of the County, specifically the sub-section Abuse of Elected Offices to Benefit the Criminal Conspirators. You would have seen overwhelming evidence that Casey Kulla frequently abuses his seat of government to provide benefits to members of Progressive Yamhill, the secret Facebook group controlled by the Yamhill County Democrats political party to conspire against other residents of the county and manipulate them.

The owners of Pollinate Flowers are involved in both Newberg Equity in Education and Progressive Yamhill groups that Casey Kulla is a member of, having used their flower shop as a way to push the group’s agenda in Newberg, Oregon.

For example, as previously reported in Truth Revealed: Recall Dave Brown Organizers Are A Radical Extremist Group in Newberg, Oregon, one of their co-owners, Zachary Goff, is both a member of the groups and the petitioner on both Recall Brian Shannon and Recall Dave Brown political action committees (PACs).

Let me be crystal clear on this; all members of Newberg Equity in Education and Progressive Yamhill, and by extension, the Yamhill County Democrat party that Casey Kulla is an active member of, are extremely antagonistic to police. They do not even want police departments to exist, at all.

Here is the evidence for that;

Tai Harden Moore, a prominent member of both groups and their current preferred choice for Yamhill County Commissioner, co-authored a manifesto submitted to the City of Portland that demands the complete defunding of police and prisons, which would result in a state of anarchy.

What Tai Harden Moore wants instead is for all of the money currently being used to fund public law enforcement to be diverted to privately ran non-profits she and other members of these Facebook groups are involved with.

A page from the manifesto Tai Harden-Moore co-wrote, The People’s Plan

Basically, they want to line their pockets with public money and cause a collapse of our society at the same time. This is because their objective is to create “black utopias”, as detailed in the manifesto Tai Harden-Moore co-authored, which in practice are racially segregated government bodies that would be ruled by what are essentially warlords.

Go ahead, read the manifesto yourself. I previously included it in my article, What Every Newberg Resident Should Know About Recall Brian Shannon School Board Campaign, subsection Tai Harden-Moore and Her Involvement in a Black Separatist Group.

I believe that after I exposed their original plan to recall Brian Shannon and then have members appoint Tai Harden-Moore to his seat, the group is now shifting to try to get Tai elected to the Yamhill County Commissioner seat so that they can implement this kind of plan into Yamhill County.

This is what Yamhill County Commissioner Casey Kulla is promoting, as is Pollinate Flowers.

This was posted inside the Newberg Equity in Education group in May 2020 of last year.

The thread is created by Elizabeth Rogers Curtis Gemeroy, after she was forced to resign as City Councilor in February 2020, and it discusses demanding the Newberg City Council to create a citizens review committee that would have resulted in giving the cult more power over the police department,

By the way, take notice of Tai Harden Moore advertising her services as a “diversity consultant” who wants to be involved. As I have shown, Tai’s motivations in this kind of activism is to cause a collapse of cities through defunding of police department and shutting down prisons, with the money diverted instead to people such as herself and the private groups she is part of.

If you’d like to read more about how much Tai Harden Moore is disgusted by police, you can read this part, What Tai Harden-Moore and Her Other Cult Members Said About Police Officer Memorial Service from my previous article about the truth of their recall campaigns.

For additional context, this isn’t the first time Pollinate Flowers has tried to pressure and intimidate the Newberg police department into implementing pro-Critical Race Theory policies that are designed to result in a collapse of law enforcement.

Here is what they posted last year when they were first trying to create this audit group they would control,

I highlighted the comments of Newberg City Councilor Stephanie Bell Findley, who is a member of the private Facebook groups as well and often posts anti-police rhetoric into the group, as I previously showed in the first two-part articles.

There are actually many politicians who are part of their groups, here is a list of some of them,  List of Identified Elected Politicians and Other Key Political Activists. They are all using their positions to push this kind of anti-police agenda throughout Yamhill County.

Here are some assorted anti-police threads I found inside the Newberg Equity in Education and Progressive Yamhill groups that Yamhill County Commissioner Casey Kulla is a member of,

As you can see, they have no problems trying to censor and harass others for their signs while simultaneously organizing harassment against the Newberg school board directors Dave Brown, Brian Shannon, Trevor DeHart and Renee Powell for their attempt to remove politics from the schools, as I have shown in prior articles.

This is because the goals of the Critical race Theory cultists are actually to indoctrinate people into their ideologies, and to crush anyone who stands in the way of their holy war against America.

I do have more of their anti-police rhetoric they have written inside their secret Facebook groups, which you can read in my prior article Part 2: Meet Progressive Yamhill, the Parent Group of the NEEd Mafia Seizing Control of the County, subsection Obviously, Progressive Yamhill Members Hate the Police and Trash Talk America on September 11th, if you are so inclined.

I actually have pages and pages more of their rants about how much they hate police, but I think this is enough for residents of Newberg, Oregon to see through their misinformation now.

Police shouldn’t weald their power to tilt things to their politics. That’s not democratic that’s power choosing things that work in its favor