An explanation of the astroturfing activities of the Progressive Yamhill / Newberg Equity in Education group on Facebook, and how they manipulate and censor information. 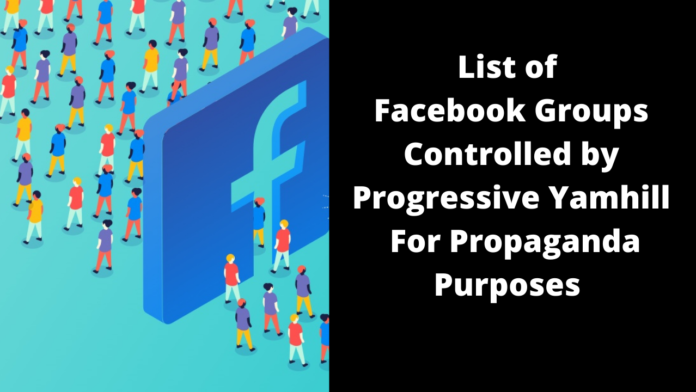 I had hoped that by publishing the downloadable spreadsheet lists of people who are part of Progressive Yamhill and Newberg Equity in Education that local residents in Yamhill County, Oregon would be able to use the spreadsheets to identify when a group is trying to mislead them. Unfortunately, many people do not always consult the list before doing business with someone or joining a social media group.

This article has been written in response to numerous emails and messages I have received from people over the past few months, who are always reporting to me about the same Facebook group moderators who censor their posts, mostly for trying to reshare my articles in those groups. This does not surprise me, because they groups are controlled by Progressive Yamhill members to begin with.

A large part of the operations of Progressive Yamhill and its subgroup Newberg Equity in Education involves controlling the narrative and flow of information that local residents can share about issues in the public forum.

Based on my research into their operations, there has been an organized effort to place many of their key members into roles on social media that allow the group to censor information that threatens to expose the group or that goes against its agenda.

In this article I will expose some of the examples of this censorship, and provide a list of the Facebook groups I have identified that they use for astroturfing and manipulating information. These communities discussion groups are essentially a kind of mailing list for them, allowing them to have their members post seemingly beginning messages and comments, designed to deceive and manipulate local residents for the benefit of the group.

The particular tactic they employ is called ‘astroturfing’, which is a propaganda effort to convince people that a group is a loosely connected grassroots movement and not something organized by a political party. Consequently, these Facebook groups are a form of astroturfing for the Yamhill County Democrats, as the die-hard members of their party are the moderators of these groups, and their goal in running the groups is to censor info unhelpful to their agenda while promoting info that is useful to it.

If you’re a normal, sane person who doesn’t want to make their racist cult more powerful in Yamhill County, I would suggest not joining these groups and if you are a member, to leave them immediately.

There are many other Facebook groups for local community discussion not controlled by their members.

The main reason why people should know that the group controls these Facebook groups is because they use their influence to censor information. For example,

This post is not fake news; it is an article where a Newberg parent explains their frustration with the failings of the Newberg school district.

They only claim articles are fake news if the articles is unfavorable to their political agenda. This particular example is from the Newberg Community Group, where Seth Renne, a member of Progressive Yamhill, is a moderator (Chris Handicap and Matt Childs are also known supporters of the group, too).

Many of the articles published on Yamhill Advocate have been censored from the groups controlled by Progressive Yamhill. They control so many of the groups that there is actually only four local community discussion groups I believe they do not control, and that I have been able to join without becoming banned, and where others can share my articles;

These four groups they do NOT control are,

Another thing you must be mindful about their group is they exploit Facebook’s auto-moderator system to mass report posts, hoping the computer AI (artificial intelligence) Facebook uses will decide to remove the post and prevent the person from posting for several days.

This tactic is known as false flagging.

As an organized group, they report the posts of anyone who speaks out against them, usually claiming the post is bullying or harassment, and sometimes FB admins (or rather, the AI) does actually remove posts on very shaky grounds.

They mass invite their members as well, to overwhelm and do this.

As the above example shows, Maddie Koslov is a member of NEEd and a teacher union member, who invited Debbie Tofte, another NEEd and teacher to join this group I frequently post into, to help mass report my posts.

For proof that they mass report posts in an organized fashion, you need only look at this posts from within the NEEd group,

CM is me, Carey Martell, by the way.

They do this to every post I ever make on Facebook, as well as to other people, as well. It varies in effectiveness; for several months they couldn’t get any of my comments removed, but recently they have gotten 1 or 2. I usually get it appealed but the appeal process takes several days.

They only perform this tactic in Facebook groups they do not control though, because for the ones they control they simply ask their members who are moderators of the groups to remove them posts and comments that expose them or go against their group political ideology.

Sometimes it is hard to identify them, because the people who are moderators were not in Progressive Yamhill or NEEd, but they are associated with people who are through family ties.

As an example, here is a Progressive Yamhill associated moderator removing posts opposing the Recall of Dave Brown and Brian Shannon, while allowing pro-recall posts to remain can be seen from the Yamhill County Neighborhood News and Info, which is moderated by Pamela Carr, Kimball Miguel Keiss, Corynne Maxwell (Shiffer), Jeni Gillmor, Donny Lehmann and Nick Storm.

As you can see, Pamela Carr removed a post that was opposed to the recall. However, Willow Muhr was allowed to make all of the following posts into this same group,

These are very obviously political posts which were permitted by the group that only enforces the rule against posts that are opposed to Progressive Yamhill’s agenda.

So, when you join the social media groups which are controlled by Progressive Yamhill / Newberg Equity in Education members, what you are doing is enabling them to gain influence and power.

They can flood your news feed with propaganda while censoring anyone who dissents, so you only ever see what they want you to see.

As an organized group they have created many Facebook groups which they turn into echo chambers, designed to allow them to spread lies without having to be challenged on them, and make it seem like they are really just neutral parties voicing personal opinions, when in reality the group is part of an astroturfing operation designed to spread propaganda and deceive local residents.

This is yet another of their Indivisible movement astroturfing tactics.

So, with that in mind, here is a list of groups that are controlled by Newberg Equity in Education AKA Progressive Yamhill AKA Yamhill County Democrats, and are used to not only spread their misinformation but also to censor any information that is against their political agenda.

The following is a list of Facebook Groups I have identified that are directly controlled by Progressive Yamhill / Newberg Equity in Education and the moderator list page that clearly shows members of the PY are moderators of it.

Joshua Duval is a liar. He is a member of Progressive Yamhill as has been show in the list of their members,

And he has admitted to this in the past,

Some of his activities in PY, participating in the antifa attack on the federal courthouse in Portland last year.

Duval is just upset that he has had his activities exposed to the light of day and can no longer use these groups to gaslight residents of Yamhill County, Oregon in service to his extremist group.

The following are groups I could not determine are moderated by associated by the member list of PY and NEEd, however, have a lot of posting activity from people who are. They are also known to censor posts that speak against PY’s agenda.

Folks for a Progressive Oregon

I hope this article is useful to people in Yamhill County, especially in Newberg and Dundee where PY members efforts are most concentrated to control the flow of information.

I would suggest not being a member of the groups that are moderated by PY / NEEd members.