A detailed response to the false allegations made about Yamhill Advocate editor Carey Martell by members of Newberg Equity in Education and Progressive Yamhill. 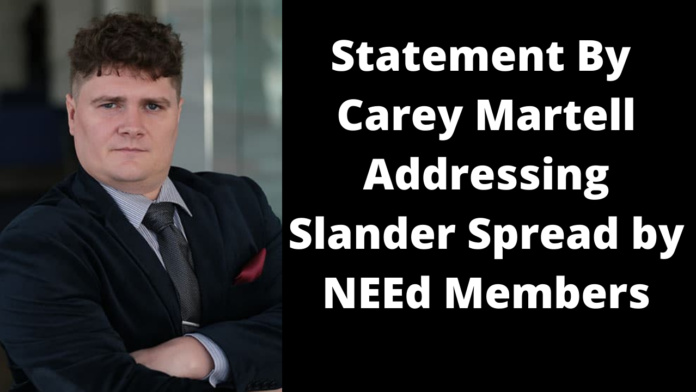 I don’t intend this article to distract from the news coverage I have been providing, which is why I haven’t published this statement until now, even though these slanderous claims have been said for many months by Newberg Equity in Education (NEEd) and Progressive Yamhill (PY) members. There hasn’t been enough of a lull in news to publish this article, with other stories taking more precedence to address and inform the public about.

However, I realized I need to eventually publish this article, and so I am doing so. I hope it does not distract from the other news stories I have published today.

I have been falsely accused of a number of things by the members of Newberg Equity in Education and Progressive Yamhill. I believe the purpose of these false accusations is because they believe that discrediting me personally will discredit all of the reporting I have done on their group and its activities. By addressing their claims at all, they will probably claim this response is somehow proof of guilt; however, I am not concerned about that because they have exactly zero evidence for their accusations against me, because those accusations are lies and there is no evidence for them.

By contrast, I have published over 70 articles with detailed information, often citing primary sources (commonly, their own private communications from their secret Facebook groups) which are the most reliable sources you can quote in a news story. What people have actually admitted to doing is the most reliable.

Not once have they ever said I fabricated or created the screenshots of their secret communications. This is because they know they did indeed post these things into their secret Facebook groups. While they frequently lie and misrepresent facts, even this group will have enormous difficulty maintaining the integrity of the group if their leaders ask the followers to claim all of the screenshots of what they posted are fabricated. They won’t be able to pull that off, and so instead of accepting responsibility for the evil they have done in service to their political agenda, they instead try to fabricate lies about me personally as a way to discredit my exposure of their true colors.

Here is a sample of what I am referring to,

Here is another example,

Here is another one, from the comment section to a post where I asked people if they were interested in joining a new weight lifting gym in Newberg that I am starting, where I will also teach historical fencing classes (by the way, the survey form for those interested in joining is available by clicking here).

(By the way, pay attention to how Kristen Stoller claims she has never danced WITH the High school student who performed in drag at her studio. Obviously, she didn’t dance with him, because drag performances are solo routines. As usual, Stoller attempts to use word play to avoid admitting to things, which is a form of lying.)

The Millennial Gentleman article referenced in the thread is this one, How to Pick Up Women At the Gym. The Millennial Gentleman website is a men’s lifestyle blog I created over a year ago after a conversation with some friends about how men’s lifestyle magazines such as Playboy, Esquire and GQ have shifted their demographics away from traditional masculinity and heterosexuality, and are now catered primarily to radical leftist women, with the goal of de-masculating men using propaganda.

If you have no idea what I am referring to here, here are some pages from an issue of GC,

This is the kind of nonsense that is regularly published in mainstream “men’s magazines” these days. And tragically, it is having a negative influence on many men who care about what is viewed as ‘popular’. The magazines create the perception that it is popular to de-masculinize yourself and that this will make you attractive to women, evolutionary signals to the contrary (masculinity would never have become a popular thing for 250,000 years if women didn’t find it attractive to begin with, because they would not have mated with masculine men in the volumes necessary for the traits to become so widespread across all human cultures).

I created The Millennial Gentlemen as a response to the takeover of once reputable publications, so that I could provide advice about relationships and dating, exercise, health, wealth acquisition and other topics, with the goal of encouraging the positive qualities of traditional masculinity.

All of these qualities in a man are very instinctively attractive to the majority of women. I stand behind all of the article I have written for MG. The article about how to approach women at a gym and ask them on dates does not advocate for any aggressive strategies, and is actually the same kind of advice that works in just about any situation a man wishes to approach a woman and ask her on a date. There are no special places in daily life where if a woman believes a man is attractive and she is looking to date that she will say no. This idea that men should only ever ask women to date while using dating apps or attending paid singles dating groups (like speed dating) is something that I believe blogs are encouraging readers to restrict themselves to because those blogs earn revenue by advertising dating services, which I do not in my own publication.

Many radical leftist lifestyle blogs have a vested interest in convincing people to not meet in the traditional fashion and to shift the culture to make it socially unacceptable to do what humans have been doing for 250,000 years; meeting romantic partners by chance while going about their lives. MG is not one of those blogs.

Furthermore, the kind of gym mentioned in the article where women can take fitness classes that teach “stripper pole workouts” is not the kind of gym I intend to make in Newberg, because they aren’t the type of gyms I frequent. I attend gyms that focus on body building, power lifting, strong men and martial arts and that is the kind of gym I am seeking to create in Newberg.

So, let me be clear here: the goal of NEEd and PY members is to discredit me with lies or half-truths, designed to convince people to not read Yamhill Advocate articles because my reporting exposes their organized activities which are designed to undermine the majority of the residents in Yamhill County, Oregon. They spread lies about me the same way they do about everyone else who speaks out against them, such as Newberg School Board Directors Dave Brown and Brian Shannon.

Furthermore, I have never in my entire life been arrested, charged or even accused of stalking, harassment, or pretty much any other serious crime. The only time I have ever been arrested in my entire life was several years ago when my driver license had just expired. I was arrested in Austin, Texas for an expired driver license, which had expired less than a week prior. It was an honest mistake to not re-register and the charges were dismissed by the judge. I could have paid for the case to be expunged from the public record, but I didn’t see the point because it’s not a serious issue.

As for the accusations they have made about me stalking someone in the Newberg High School when I was still living in Newberg, these claims don’t make any sense;

Firstly, I became a soldier while others of my age group were still in high school (as I was born in December, I was a year older than most of my age peers in the public school system were).

I never attended Newberg High School. I moved to Gaston, Oregon to live with my mother when I was in the 7th grade, and I dropped out about a month into the 9th grade. I earned a GED at 16, and I enlisted into the military at 17, first serving in the National Guard for a little over two years (much of that time was in Virginia, actually, at Ft. Belvoir, because I had transferred to the Virginia National Guard) before re-enlisting into the active component of the US Army where I served an additional 2 and a half years, including a tour of duty during Operation Iraqi Freedom.

Furthermore, no evidence has ever been shown for the claims they have made against me, like the supposed police report they claimed to possess, but in 5 months have never published. Because it doesn’t exist, as the incident never happened.

I have published a detailed biography about myself elsewhere on the internet, but this is the short version;

I believe that this statement is detailed enough to respond to and future proof the claims made against me by the Newberg Equity in Education and Progressive Yamhill members who have spread false rumors about me. As Oregon has extremely strict laws about defamation and libel that make those cases easy to dismiss, I see little value in filing libel cases against them. I also believe this detailed statement of facts is sufficient to quell their efforts to slander me.

And now, we return our regularly scheduled programming of local news about things that impact the lives of the residents of Yamhill County, Oregon.

Edit: This is exactly what kind of slander I am talking about and who is saying it.

Here is another example, where more members of NEEd / Progressive Yamhill make up lies about me “harassing” people because I dared to expose what they have been doing that is unethical and probably illegal,

Despite the hundreds of pages of their private communications and even showing a video from a Yamhill County Democrat party that clearly shows that Progressive Yamhill members are running the recalls against Dave Brown and Brian Shannon (because they talk about the progress they are making; Kristen Stoller, not Zach Goff, gives the detailed updates about the next steps of plans for the Recall efforts), they still believe they can blatantly lie and slander me.

Pollinate Flowers is ran by, from my understanding the polyamorous gay thruple Jeremi Carroll, John Peterson and Zach Goff. As I mentioned before, Zach Goff is technically the petitioner but he is not the one organizing the recalls. Both Jeremi Carrol and John Peterson are members of Progressive Yamhill and NEEd, and the Pollinate Flower shop is used by the group for purchasing and selling promotional products, as well as a place to gather signatures for the recalls. I‘ve shown the evidence for all of this in prior articles.

Furthermore, Pollinate Flowers has been involved with Kristen Stoller in the social activism, contributing to pretty much all the events put on. Again, they are part of the conspiracy against residents to push a fringe ideological agenda that is completely inconsistent with the traditional values of this town with the goal of shifting the voting culture through indoctrination of the school children.

Here is yet more,

I think it’s pretty clear that you have hit a nerve with these people.
They can talk all the smack they want to talk but their screenshots just don’t lie and that right there is the only reason you are being seen as the enemy.
Thanks for trying to clear things up but it wasnt necessary because we can see who you are.
You have put a lot of time into defending the kids of Newberg and the fact that they are trying to turn that into something bad says more about them than it does you.