New Dundee Elementary School Will Only Have “All-Genders” Bathrooms

Leaks from the architecture designs of the new Dundee Elementary School building show that school administrators intend to force boys and girls to use the same bathrooms, among other shocking details. 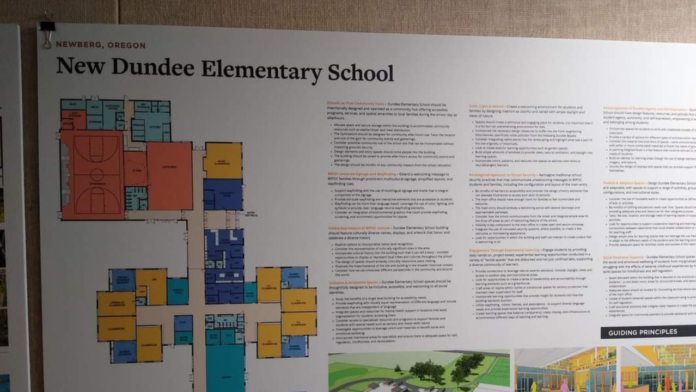 During my initial infiltration of the Progressive Yamhill and Newberg Equity in Education groups I saw some communications discussing ‘equity’ designs in the new Dundee Elementary school. I was unsure what they were talking about until a recent leak provided to the Advocate shined a spotlight on what was surely meant by those posts.

Leaked documents from the planning commission show they intend the school to be intentionally constructed with no gender exclusive bathrooms — instead boys and girls will be expected to share bathrooms.

According to the source that provided the leaks, these designs were created by BRIC Architecture, the firm who is designing the new school building. The bathrooms are marked as ‘RR’ in the map, and there are no gender specific bathrooms. This also appears to apply to the bathrooms adjunct to the gymnasium, which I assume would also be locker changing rooms.

The plans also appear to include “outdoor classrooms”, whatever that is suppose to mean in a school district where it rains heavily nearly every day for over half of the school year. I’d arguing building such a thing would be a considerable waste of space and ill-conceived.

Furthermore, according to the plans the school will be decorated with Critical Race theory propaganda labeled as “BIPIC centered signature and wayfinding” and “visible expressions of BIPOC culture”. It is my belief the term “wayfinding” is meant to be politically correct language for creating racially segregated sections of the school which “BIPOC” students can enter but others cannot. They also appear to want the school to use multiple languages in its signage as well; apparently the designers don’t believe school children should be expected to learn English.

The bullet point labeled “incorporate cultural history into the building such that it can tell a story — consider opportunities to display or represent local tribes and cultures throughout the school” I find to be rather troubling.

I assume what is actually meant by this is that the signs currently displayed by teachers of their own volition in the Newberg schools, such as the “This is Kalapuya land” signs, will be made permanent decorations in the new elementary school.

These signs would continue to perpetuate the false claim that the cities of Newberg and Dundee occupy land stolen from Native American tribes.

In actual fact, the Kalapuya people who once lived in the Willamette Valley sold their land rights to the federal government of their own volition. This an irrefutable fact about the history of this area.

This fact is ignored by the social activists hanging “This is Kalapuya land” signs all over Newberg, including in the schools. If you sell something, it’s obviously not yours anymore.

In reality, the land Newberg and Dundee sit on was not “stolen” from the Kalapuya; instead, they nearly went extinct from diseases and famine, and sold their land rights to gain resources and assistance. The loss of life from disease resulted in their tribes suffering a severe lack of manpower to obtain resources like food and maintain the safety of their homes. In 1885-6 the Kalapuya and several other similarly devastated tribes entered into a treaty with the federal government, relinquishing all claims to the lands of the Willamette Valley in exchange for resources such as money and medical care. This treaty consolidated the survivors of the different tribes on a single reservation. If the tribes had not done this, they would have all went extinct because their numbers were fewer than 100 at the time this treaty took place. They would have died out.

The truth is that neither Newberg nor Dundee possess a terribly ‘diverse history’, and I think pretending otherwise is deceitful and phony. Pretending that it has one seems motivated out of current political trends, the desire to virtue signal through a façade of ‘acknowledgement’ of indigenous peoples even in situations when it makes no logical sense to do so.

Neither the town of Newberg nor Dundee were recognized cities when the Kalapuya tribe had rights to the area; Newberg was officially founded in 1889, although it had previously been known as Chehalem and had a very small number of settlers in the area who worked in the fur trading business. Champoeg, which sat across the river, had been a much larger community but it was destroyed in a flood several decades prior, and the majority of the surviving settlers left the area. As mentioned earlier, by the time the Kalapuya tribe sold their land rights within the Willamette Valley their numbers had dwindled to less than a hundred as a consequence of famine. Dundee originated as a post office in 1881, along the train line. Both Dundee and Newberg were overwhelmingly populated by Quakers for many decades, until in the 1930s when large waves of Russian-German immigrants started moving here. Russian-German immigrants found the climate of the Willamette Valley similar to their home lands, and brought with them techniques for transforming the forest valley into bountiful farm land, developing the orchard fields the area was largely known for most of these towns’ histories until the recent vineyard explosion; in fact, it is still the case that 99% of the hazelnuts grown in the US come from Oregon.

Consequently, indigenous tribes have had almost nothing to do with Newberg or Dundee history, aside from perhaps a small minority of indigenous descended people living as residents in the cities. But as a tribe, their history in these areas predates both towns.

It is perplexing to me why the school designers would fixate on virtue signaling acknowledgements to peoples who had almost nothing to do with the success of the towns and their growth, and ignores the history of the people who actually made Dundee and Newberg prosperous places to live and raise families for generations?

Why do these activists want to spread a false history to the school children? I believe the reason why the social activists are spreading a distorted version of historical events to young children is because they want kids to believe America was unjustly formed and is therefore an illegitimate nation. That appears to me to be the motivation behind the creation of this pseudo-history and its spread. As I have shown in prior articles, such as my article about the rantings of Board of Education Vice Chair Guadalupe Martinez from within the Facebook groups, these fringe extremists want the United States to be dismantled and rebuild it into racially segregated communities.

Oregon Board of Education Vice Chair Gudalupe Martinez declaring that the USA should be abandoned like an old car at a junk yard.

These extremists appear to believe one way to achieve their “utopia” is to indoctrinate young children into a false version of history which will be difficult for them to unlearn and poison them against our country.

I doubt that when Newberg and Dundee voters passed the bond measure to create the new elementary school that they realized Indivisible aligned school administrators intended to force children to share bathrooms with students of the opposite gender and that the school walls would be plastered with fringe political propaganda as part of a conspiracy to cause the collapse of our country. And yet, here we are.