What Carlton, Oregon Voters Should Know About Linda Watkins and Shirley Ward-Mullen 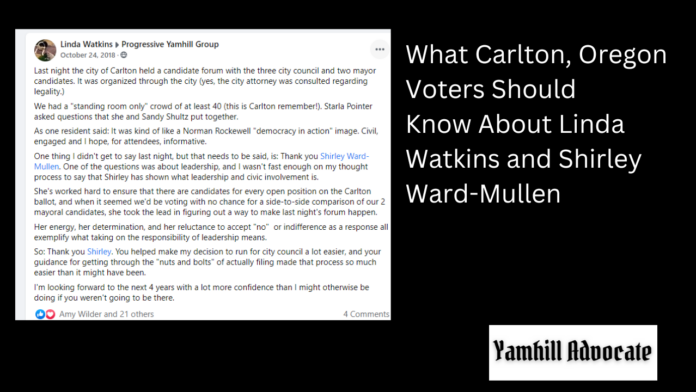 What voters should know is that these two are members of Progressive Yamhill, a registered chapter of Indivisible.org, which is a nation wide extremist group with numerous chapters across America, with chapters in most large cities. Indivisible supports legalizing all forms of recreational drugs and radical restructuring of rural areas, using urban renewal committees to support the creation of high density housing; essentially, they are pro-welfare state and socialism, and generally opposed to capitalism (which I find to be ironic given the number of people in the group who have greatly profited through private enterprise). The goal of Indivisible groups is to transform rural areas into far left liberal aligned communities that will vote for Democrat candidates. Indivisible chapters also work in cooperation with violent Antifa cells, providing funding and resources to them, as I have shown evidence for in prior articles this is something Progressive Yamhill has done quite extensively.

I have published over 100 articles on the Advocate exposing their unethical, possibly illegal actions and how they deceive voters into supporting causes that support their fringe political agendas.

Here is the proof of their membership in the group, a report she made to members of the private Facebook group about city business.

For an in-depth article about Progressive Yamhill and their activities which I published last year, please click here. This article is comprehensive and covers the activities of many of its members over a four year period.