During a conversation at the Welllness Center panel at Newberg High School, longtime Progressive Yamhill member and Newberg City Councilor Elise Yarnell Hollamon acknowledged that she believes the group to be an extension of the Yamhill County Democrat Party. 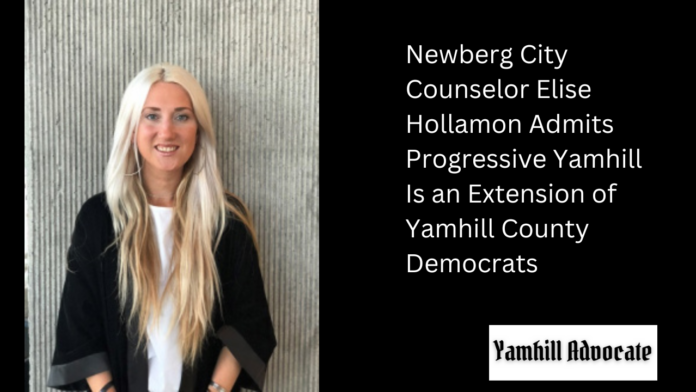 As previously reported in a prior article, on October 10, 2022 a community forum was held at Newberg High School about the Community Wellness Center. Elise Hollamon and Jeri Turgeson answered several questions asked by Yamhill Advocate editor Carey Martell. During these answers it was admitted the Wellness Center is providing “gender affirming care” to students.

Shortly after the panel ended I was approached by Hollamon who engaged in a dialogue with me, venting her frustrations at my reporting, especially concerning an article I wrote about her. During the course of this conversation Hollamon admitted that she agrees with my assessment of the Progressive Yamhill group as an extension of the Yamhill County Democrat Party, a claim I have asserted numerous times in my reporting of the group’s activities.

Hollamon’s acknowledgement is significant because she has been a long time member of the group involved in its activities.

Please watch the following video to hear the audio recording I captured of the conversation between myself and Elise Hollamon.

Note: There are a few typos in the subtitles that say “Harrington” instead of “Etherington” for Isaac Etherington speaking.

Hollamon’s acknowledgement is, I believe, far more honest than the statements made by Lynette Shaw and Megan Corvus who have consistently denied that the Progressive Yamhill group is an extension of the Yamhill County Democrat Party. They have claimed the group is “non-partisan” but I have seen no evidence for this. As I previously pointed out in my article Independent Party of Oregon Is a Front for Oregon Democrats, Sal Peralta, an officer of the Independent Party of Oregon, engaged in conversations with YCDP officials about how to flip independents to vote for Democrat candidates.

I believe that those who continue to support the Yamhill County Democrat Party activities and excuse their misconduct should ask themselves what they are contributing to the political divide instead of blaming me for being the bearer of bad news. The public deserves to know the things that agents of a political party do when that activity involves local elections, the operation of public entities such as schools, local city government, and nonprofit groups. The public deserves to know the true intentions of these people who pursue public office and who their loyalties are to. The Yamhill Advocate is a newspaper that I founded specifically to educate local voters about information that other newspapers are choosing to not report.