In campaign marketing materials Stephanie Findley, Jefferson Mildenberger and Casey Banks claim the Chehalem Valley Chamber of Commerce endorsed their runs for Newberg City Council. In reality it was only a small group of seven people that endorsed them. 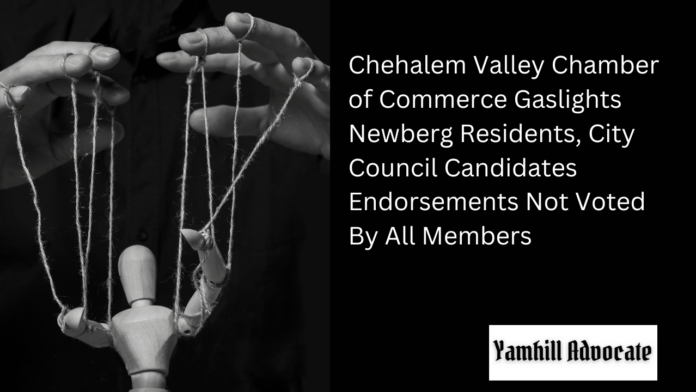 Earlier this month I published the article, Newberg First Gaslights Voters About City Council Election. This article is a follow-up story that shows how the Chehalem Valley Chamber of Commerce is involved in this deception.

In the advertising campaigns for Stephanie Findley, Jefferson Mildenberger and Casey Banks a number of groups are frequently mentioned as endorsing them as candidate for the Newberg City Council election this month. One of these groups is Chehalem Valley Chamber of Commerce, a local business organization (501c6) that supposedly lobbies for the interests of Newberg and Dundee based businesses. In actuality the Chamber appears to overwhelmingly cater to the desires of Progressive Yamhill members and largely ignores the interests of businesses that do not belong to this exclusive inner circle. This gives the impression the Chamber speaks for all businesses in Newberg and Dundee, when they actually do not.

As an example, the endorsements for Findley, Mildenberger and Banks did not result from a vote by all of the business members in the Chamber as this “endorsement” may have falsely implied; in fact, member businesses of the Chamber were not consulted equally about which candidates to endorse. Instead, the endorsements are a result of a decision made by the Chehalem Valley Chamber of Commerce Government Affairs Committee, a small panel of people. This committee is controlled by Maryl Kunkel, Phil Higgins, John Bridges, Alyssa Johnson, Mark Moison, Brian Doyle, and Josh Duder.

Higgins, Kunkel, and Bridges are known Progressive Yamhill members and the others are known to be sympathetic to PY’s agendas. In fact, Maryl Kunkel is presently acting as campaign manager for Stephanie Findley.

The other business owners who are members of the Chamber were not consulted nor did they vote to endorse Findley, Mildenberger and Banks. The decision to endorse was made without their knowledge or consent.

None of this info should be surprising; earlier this year I showed the ties the Chamber has to Progressive Yamhill via the officers who control it.

Furthermore, here are some recent posts made by Phil Higgins regarding the upcoming Newberg public school board election. Please keep in mind the NewbergNice account (which I believe is ran by Progressive Yamhill member Melanie Taylor) frequently posts misinformation such as here falsely claiming no school board directors have a background in education (in actuality Chair Dave Brown is a well known educator in the Newberg schools).

In this post Phil Higgins does his part to spread propaganda, claiming with no evidence that people do not want to move businesses to Newberg because of the drama created by Progressive Yamhill’s unlawful activism in the schools.

This is not the first time the Chamber’s reputation and resources has been used to advocate for the interests of Progressive Yamhill’s agenda.

Last year in the article Meet the Newberg Mafia I showed evidence for how Progressive Yamhill (ie the Yamhill County Democrat Party) used a subgroup, Newberg Equity in Education (NEEd) and its secret Facebook group to organize political activism in the Newberg public schools.

Here is a thread from within the NEEd Facebook group from August 21, 2021 where former Newberg School Board Director Brandy Penner admits that she sent an email to others at the Chamber committee requesting they use all of the buildings that Chamber members have access to (including the public buildings such as the schools) as advertising space for expressing the group’s political ideology. She notes that the idea was originally proposed by attorney John Bridges, who along with his wife Debra Bridges are Progressive Yamhill members.

You should notice that Penner also mentions using gift cards to reward “staff” which is meant to mean rewarding the members of NEEd that are school district employees with gift cards for their political activism in the schools. Chehalem Valley Chamber of Commerce would later create the Berg Bucks program with funding provided by the City of Newberg; that is, the Progressive Yamhill controlled City Council voted to spend city money to create a gift card program controlled by the Chamber (which as this social media post shows) who can then turn around and give free gift cards as a reward to its agents performing political activism.

This is yet another example of the insidious way that groups Progressive Yamhill members seize control over turn around and use the power, resources and influence of the groups to push their radical agendas, frequently to gaslight and trick voters.