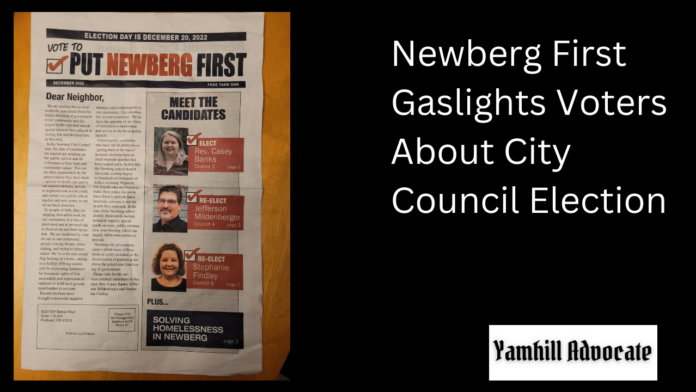 As detailed in my previous articles, Stephanie Findley and Jefferson Mildenberger are long time members of Progressive Yamhill and its subgroup Newberg Equity in Education (NEEd). Casey Banks is also associated to the group and its agenda as well. Now Progressive Yamhill appears to have created a new campaign astroturf called Newberg First which I believe is designed to gaslight non-affiliated voters in Newberg to convince them to keep Newberg under the control of the Progressive Yamhill extremist social activist group. They want Newberg residents to elect their candidates on the special election December 20th for Newberg City Council seats.

As part of the propaganda effort they have sent out a mailer that tries to gaslight residents. For example the mailer mentions lawsuits against the Newberg public schools but fails to mention that Findley, Mildenberger and Banks are involved with Progressive Yamhill, the group responsible for organizing the lawsuits and it is their members who filed the complaints. It also mentions a “flag burning” incident at a residence which to date has had no arrests and may have been staged with the goal of manipulating voters into believing hate crimes are common in Newberg.

The mailer was paid for by the Independent Party of Oregon, and as I pointed out in a prior article, its founder and officer Sal Peralta works with Yamhill County Democrat Party leadership to trick independents into voting for Democrat candidates.

Additionally, I pointed out in a prior article, Progressive Yamhill Newberg City Councilors to Appoint District 3 Replacement Ahead of Special Election, Newberg City Councilors Elise Hollamon, Jefferson Mildenberger and Stephanie Findley outvoted Peggy Killburg and Mike McBride, forcing the fulfilment of the vacant District 3 seat in a rushed process ahead of the election that may result in the loss of Mildenberger and Findley’s own positions on the Council. They have exploited the death of Denise Bacon, the councilor who held the District 3 seat, in a process that will surely result in another Progressive Yamhill lemming appointed to the seat a day before the election.

Their claims about wanting to do what is best for Newberg residents does not support their actual behavior on Newberg City Council.  Most families in Newberg aren’t benefited by the social policies of permitting car camping, funding homeless camps next to schools, putting hardcore gay pornographic books in the teen section of the public library, supporting ultra-violent groups like Antifa and creating a toxic culture in the city using gaslighting that accuses neighbors of being white supremacists and Nazis just so they can try to to win ideological debates. All of these are things that Progressive Yamhill members and their supporters are responsible for doing in Newberg as part of their extremist social activism.

Newberg was also not put “first” when covering up a sexual harassment investigation against former City Manager Dan Weinheimer and paying him over $230,000 to enter a non-disclosure agreement in an effort to hide his alleged misconduct and spending the covid-19 federal relief money primarily on businesses the City Council members themselves either directly control (as is the case with Elise Hollamon and Stephanie Findley) or have strong associations to through the Progressive Yamhill social activist group.

The mailer also claims these candidates are going to “solve homelessness” but nothing could be further from the truth. Most voters are unaware that the Community Wellness Collective operates both Harvest House and Newberg Emergency Shelter, which provide services to homeless. The nonprofit is also involved in the tiny home Peace Trail village project built next to the private Veritas school. Community Wellness Collective is ran by Elise Hollamon and employs Stephanie Findley; in fact as part of the city budget committee they have both participated in votes to award significant contracts to these projects they are involved with. This is inherently shady and I believe a violation of Oregon government ethics laws with conflicts of interest.

As explained in a recent video by the YouTuber Jake Tran it is not unusual for politicians to create nonprofits purporting to help solve homelessness but actually pocket the money for themselves,

Holloman and Findley have a vested interest in a homeless crisis in Newberg as the escalation of it means they can continue receiving more funding to their nonprofit projects. They also openly use their positions in public office to fund the projects they are directly involved with in violation of state ethics laws. I see no reason why anyone would believe they want to end homelessness in Newberg given this information.

I also see no reason why Newberg residents should vote for candidates who lie and deceive them about their goals for Newberg and about their support for extremist groups like Antifa.

It should surprise me that it’s that easy to fool the foolish. The blind leading the blind. I have a long history here. We should exchange stories!