Yet another Progressive Yamhill member is trying to use the legal system to censor the free speech rights of the press who report the truth they would like the public to not know about. 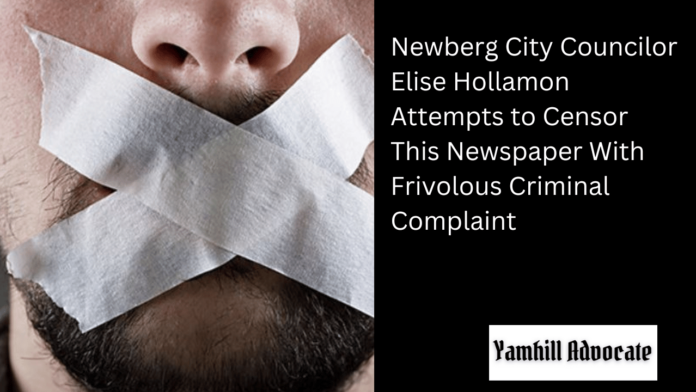 Readers of the Yamhill Advocate should be aware that about an hour ago Yamhill County Sheriff Deputies came into my gym and informed me I would be charged with a Class A misdemeanor but due to conflicts of interest it would have to be done by Marion County or another county.

According to the deputies Newberg City Councilor Elise Hollamon has claimed that one of my news articles violates a state law, ORS 165.540 and wants to press charges against me in the latest example of a Progressive Yamhill member trying to use law enforcement and the courts to intimidate the Advocate newspaper into silence so I will stop exposing them to the public.

Long time readers of the Advocate will recall that previously Progressive Yamhill member Tai Harden-Moore filed criminal complaints against me in numerous Counties trying to have me arrested for my journalism. I have also been threatened to be sued me for defamation although the complaints have never been filed. Hollamon’s actions are yet another way in which the group is attempting to use their influence to censor this newspaper that has exposed their unethical and I believe even corrupt actions and spread propaganda to deceive voters.

The truth is, many Progressive Yamhill members have routinely filed complaints against me with the police. I have had to speak with police in the past about these complaints. All of the complaints were because of news articles I wrote about Progressive Yamhill members and their activities, to expose the truth about them and alert the public about their activities that impact their daily lives through the political activism and decisions their members make as public officials.

I am relatively confident that groups like the ACLU who claim to be defenders of free speech will not assist this news publication, as they only care about protecting speech that helps their fringe extremist political agendas. Therefore I ask readers who wish to provide any assistance to make a donation to my legal defense fund by clicking here to my profile at GiveSendGo.

My Official Response to the Complaint

I completely disagree with the complaint Hollamon has made and I prepared the following statement to explain why. I sent the following via email to the Sheriff’s Office directly;

About twenty minutes ago Deputy Sheriff Andrew McMahon and Detective Alex Linstad came into my gym in Newberg, Power Palace Gym, claiming that I have violated the law ORS 165.540 Obtaining contents of communications by having published a recording of a conversation between myself and several parties, noticeably Newberg City Councilor Elise Hollamon on my newspaper Yamhill Advocate in the October 22 article https://www.yamhilladvocate.com/2022/10/newberg-city-counselor-elise-hollamon-admits-progressive-yamhill-is-an-extension-of-yamhill-county-democrats/

I want to point out the following reasons why I have not broken any laws through my work as a journalist.

Firstly, ORS 165.540 expressly states in section A) that this provision of the law is not violated if at least one participant gives consent. Obviously, I gave myself consent to record my own conversation but more importantly, even if you are wanting to charge me under section C where all participants are informed that their conversation is being obtained you cannot justly do so and this is why.

This recording was made inside the Newberg High School in a room with security camera equipment and other event recording equipment for the panel. The conversation took place within an arm’s reach of that recording equipment, as originally I was talking to Isaac Etherington who was still standing by the equipment when Elise Hollamon approached me. A school resource police officer who was also I believe wearing a body camera was also present the entire time and as I will explain, I regard as a participant in the conversation which Hollamon initiated since he stood by me the entire time and observed the entire conversation. As a listener he was therefore a participant.

No one has any reasonable expectation of privacy who enters a public building where they are being recorded and is in the presence of other event participants. As I recall there was actually at least five people who listened to the conversation but there could have been others who also overheard it since there was around 30 people in the room. I do not regard the “event” to be concluded when people are still at the event space talking about the Wellness Center (which the panel was about) and networking with one another and asking followup questions of public officials who were on the panel, which I regard Hollamon as volunteering to do by approaching me, a journalist she knows is one since she was upset about my newspaper’s articles. In fact I regard Hollamon’s questions to me an extension of the same questions she asked me during the panel event itself, where she criticized the same articles she then discussed during the followup conversation at the event space.

Furthermore the conversation took place literally within less than an arm’s distance from the same camera and microphone that was broadcasting the livestream event. The conversation between Elise Hollamon, myself and Isaac Etherington was also in the direct presence of the school security police officer who was standing beside me to my left the entire time and I have no doubts was recording on his own device the entire conversation. That is to say, if I had raised my left arm I would have touched the officer himself. By the officer standing in proximity to me and overhearing the conversation and himself using his own body camera. Consequently I would argue that section 3( b) also applies since a police officer was standing there a participant the entire time. I do not know the name of the officer but I am sure you can find this out.

Elise Hollamon also approached me and initiated the conversation. I did not approach her. She approached me fully knowing that I am a journalist who was there to cover the event and probably would have recording device on me. The device was my smart phone video recorder which I had recording from my coat pocket. It is a very large phone case and is what I would regard as noticeable from my jacket pocket from my left breast. As the event was a town hall meeting section 6) a therefore also applies since the recording was made in a public building in a public space with many dozens of people around us, where a police officer was a participant and where Hollamon had no expectation of privacy.

Elise Hollamon is a public official who was at the town hall panel in the school to be recorded. She chose of her own volition to approach me knowing that I am press and that I probably was recording. I never once gave her any indication the conversation would be private and she had no expectation it would be, since it was inside a public school building where cameras are always recording, it was in front of another police officer who had his own body camera, the conversation involved the media resource individual for the school personnel Isaac Etherington who for all she knew still had his camera and microphone on since it was not broken down and was still setup while she approached me to talk to him.

Furthermore, the entire point of publishing my article where Elise Hollamon’s recording is shown to the public is because she admitted she believes Progressive Yamhill is an extension of the Yamhill County Democrat Party, which is an important admittance because in my article I assert that the YCDP is violating campaign finance laws through the Progressive Yamhill activist group. Consequently the recording was published in the public’s interest as Hollamon is a public official who is a member of the group who I believe is violating campaign finance laws.

Finally, it is my understanding that a reader of my newspaper recently filed an Oregon Government Ethics Commission complaint against Hollamon and cited evidence I have published about her in my newspaper. Therefore I believe this complaint of hers is in retaliation as a form of harassment and is an attempt to infringe on my rights of free speech as a journalist investigating her and others in her activist group I have been critical about.

Thanks for the good report and insights