Tai Harden-Moore Tried to Have Me Arrested For Exposing Groomers

Tai Harden-Moore and other fringe activists attempted to have Yamhill Advocate editor Carey Martell arrested for exposing the activities of their group that can be regarded as child grooming. 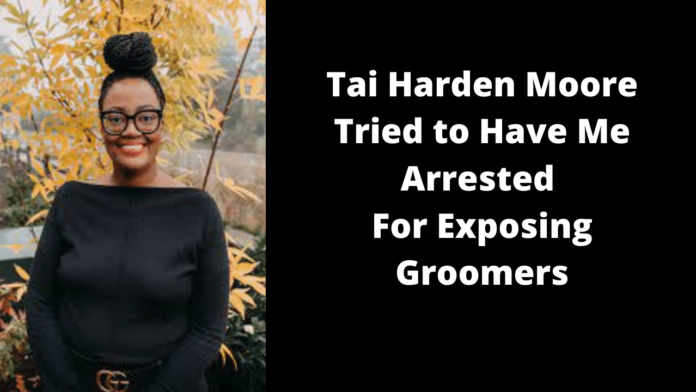 As long time readers of the Advocate know, Tai Harden-Moore is one of the main leaders within the Newberg Equity in Education (NEEd) and Progressive Yamhill social activist groups whose agenda has been to push pro-Critical Race Theory policies onto residents of Yamhill County, Oregon by taking over county, city and school governments. For those new to my reporting, Progressive Yamhill is a registered chapter of Indivisible.org , a nationwide organization of extremists who employ a variety of unethical tactics to force their fringe ideologies onto others.

Tai Harden-Moore is also a public figure who has unsuccessfully ran for the Newberg, Oregon school board and Yamhill County Commissioner (although she did drop out early in the race for Commissioner).

In addition to her position as a central figure in these Indivisible aligned groups, Tai Harden-Moore is also a professor at Portland Community College where she teaches Paralegal Studies. Prior to her involvement in Yamhill County politics, in 2017 she co-authored “The People’s Plan” as part of the Black Lives Matter aligned group “Imagine Black”. The document demands the defunding of police and closure of prisons, and to divert money from law enforcement and shift it into the pockets of private companies aligned with BLM’s vision of “Black utopias”; racially segregated communities with their own self-policing and governorship, similar to Native American tribal reservations. You can read more about this racist manifesto she co-wrote in one of my previous articles.

Tai Harden-Moore has also written particularly nasty comments on social media about police; as an example, this thread from a Facebook group where she and others derailed the comment section of a news story about a funeral procession for a local police officer because she doesn’t like that mourners were asked to hold Blue Line flags in the press release I published.

In an ironic and hypocritical twist, despite her anti-police leanings it turns out that Tai Harden-Moore attempted to have the Newberg-Dundee Police arrest me for exposing the activities of her fellow social activists that I consider to be a form of child grooming. I have obtained the following police report from a public records request of the complaint, which you can download yourself and read by clicking here.

I will embed the main part of the police report here,

The article which Tai Harden-Moore cited as “threatening” is this one, where I exposed Kristen Stoller and others who are involved in activities promoted and funded by Progressive Yamhill members that I regard to be a form of child grooming,

In reading the report I find it rather ironic that someone who hates police and wants prisons to be shut down is trying to get me arrested because my investigations into her activist group are shining an unflattering spotlight on them.

I also find it interesting that according to the report, Tai Harden-Moore (who is supposed to be an expert on law) cited criminal cases that happened in different states when trying to convince police to have me arrested here in the state of Oregon. In the report the filing officer mentioned to her that he has to abide by the laws of Oregon and not other states, and Tai Harden Moore did not seem to understand this very basic concept that anyone with even a rudimentary understanding of legal precedence would know.

It is unsurprising that Tai Harden-Moore does not work as an attorney nor in any other non-academic aspect of the law, because she clearly does not actually have the ability to interpret laws in a way that is consistent with what the legal code says. As I wrote before in my article showing that she teaches Legal Studies at Portland Community College, I feel sorry for anyone who has been a student of hers, because she has no idea what she is talking about when it comes to the law. I believe any money they have spent taking classes with her has been wasted.

The decision is unsurprising to me, because nothing I have published on this newspaper is harassment. As I have repeatedly explained to Tai Harden-Moore my reporting is done within my rights as a citizen of the United States. While there are limits to the 1st Amendment it is obvious that my reporting is done for purposes of providing commentary and critique of public figures such as herself, and to share information that is of the public interest. Tai Harden-Moore and others are members of a fringe social activist group that has influenced public policies and the lives of all residents in Yamhill County, Oregon, and so all criticism of their activities is protected by the 1st Amendment and the laws of the State of Oregon.

Furthermore, just because I personally do not care what consequences these extremists suffer socially after becoming exposed for the vile things they do does not mean I am promoting violence against them. I have said many times in past articles that the mechanisms for stopping and punishing these malefactors exist in our country’s democratic and legal processes; the very same systems these extremists loathe and wish to dismantle. It is the democratic system — elections, laws and enforcement of our laws– that they must be stopped and punished by.

In truth, it is extremist groups like Antifa (who Progressive Yamhill has provided funding to) that are the ones that encourage and promote violence as a means of impacting social change.

Others Who Filed Complaints

In reading the report it turns out that Nick Banta (who is another of these fringe activists I called out in my past reporting) also called the police and colluded with Tai Harden Moore in trying to get me arrested. Local Newberg attorney Ryan Howard (who is also deeply involved in NEEd / Progressive Yamhill activism) also filed a complaint against me as well. This is unsurprising to me given Ryan Howard’s deep involvement in the group. He frequently provides his legal opinions as a lawyer to members of the group, leading them into making poor decisions. It is my opinion that Howard, much like Harden-Moore, is not a particularly good legal scholar and his attempt to report me to police for my article is yet another example of why I have formed this opinion about him.

This incident is just more proof that Progressive Yamhill members like to waste the time of public institutions, such as police, district attorneys and courts, by filing frivolous complaints against those who won’t bend the knee to their ridiculous agenda and who speak out against them. They want to censor and silence me by any means they can, instead of accepting responsibility for the bad choices they have made. They think they can harass people into not opposing their agendas.

Instead of trying to recruit others into helping them retaliate against me, they should instead re-assess themselves; everything I have published comes from information they made publicly available, much of it coming from their own Facebook posts. They just don’t like that I have organized their posts in such a way that others can see through their virtue signaling facades, now identifying them for who and what they really are. They should correct their behavior and cease their pointless social justice crusade against their neighbors.

I think it’s also incredibly hypocritical for people who are opposed to police and wish for their departments to be “defunded” and for prisons to be closed, to then turn around and attempt to use law enforcement to retaliate against those who disagree with their extremist viewpoints and expose them. Clearly, they believe that different rules should apply for different people.

A fun read indeed. Yamhill Progressives Fail #..8…? I’ve lost count. The filing officers analysis was quite careful and even erudit. Nice work by whoever that was.

Moore knows very well no physical threat is intended, nobody opposing NEEd wishes for that.
Keep shining the light, the rats are scurrying.

Thank you , Carey ! The Yamhill Advocate provides a excellent service to Newberg , with your indepth analysis . Where would we be without you ? Keep up the good work ?