A lawsuit filed by Newberg Equity in Education members against Newberg Public School Board Directors that claimed they had violated public meeting laws has had 4/5ths of its claims dismissed by the court. 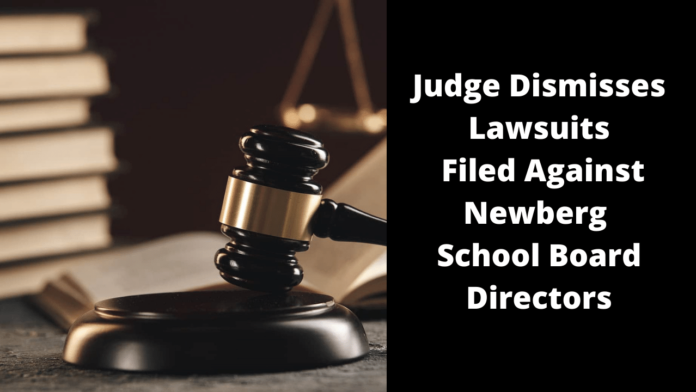 As previously reported in my articles, Everything You Need to Know About the Newberg School Board Lawsuits That The Newberg Graphic Isn’t Telling You and Analysis of the Newberg Teacher Union Lawsuit Against the School District For Banning Political Symbols, last year several members of Newberg Equity in Education (NEEd) filed lawsuits against Newberg Public School Board Directors Dave Brown, Brian Shannon, Renee Powell and Trevor DeHart. The first lawsuit claimed that these Board Directors had violated public meeting laws by hiring attorney Tyler Smith last year to assist with drafting the language of the policy to require school employees to remove politically divisive symbols (such as Gay Pride, Black Lives Matter and Antifa flags) from school properties, especially classrooms. The second series of lawsuits were filed by members of NEEd who are in the Newberg Education Association (the local teacher’s union), and these lawsuits accuse the policy of violating teacher’s First Amendment rights.

The lawsuit filed against the Board Directors accusing them of public meeting law violations was filed by Beth Woolsey and her husband Greg, Kathleen McNeal and her husband Jeff, Meghan Rogers-Czarnecki and Stefan Rogers-Czarnecki, and Elizabeth Gemeroy; all of these people are members of Newberg Equity in Education (NEEd). In October, they later amended the filing to claim the Board Directors also violated public meeting laws by firing former Superintendent Joe Morelock without allowing public comments on the topic.

I have been provided information that updates this story; several days ago, Circuit Court Judge Cynthia L. Easterday dismissed the first lawsuit in its entirety.

In two judgements — ORDER ON DEFENDANT NEWBERG SCHOOL DISTRICT 29J’S MOTIONS TO DISMISS and ORDER GRANTING DEFENDANTS’ MOTION TO STRIKE — the School Board was granted its motions to dismiss the lawsuits NEEd members had filed pertaining to the claims that the Board had broken public meeting laws by hiring Tyler Smith and firing Joe Morelock without public comments. In fact, the Court went as far as to dismiss nearly all of the claims without the Plaintiffs’ having the ability to refile the claims again. Only one claim was permitted to be re-filed for consideration by the Court, if the Plaintiffs are able to provide any additional evidence for the claim. I personally doubt they will refile, as they had no evidence for the claims they made in the lawsuit to start with. The only claim of the lawsuit that is allowed to proceed is the claim that Brown, Shannon, Powell and DeHart decided to hire Tyler Smith in advance of the Executive Session, and this is something that the Defendants have yet to provide any evidence for.

As I had said in my original articles, I firmly believed these lawsuits were frivolous in nature and the accusations of wrongdoing would be dismissed by the courts, and that is exactly what transpired. The majority of what the Board directors were accused of was not illegal. So, this was the inevitable logical conclusion of what would occur. Despite this being an extremely obvious conclusion, other publications such as the Newberg Graphic presented the lawsuits as if they were legitimate — in fact, last October the Graphic claimed the amended filing accusing the Board Directors of breaking public meeting laws by firing Morelock without public comment was a “bombshell”.

If Newberg Graphic editor Gary Allen actually knew what he was talking about, he would have seen as I did that it was a dud from the start.

As voters in Newberg’s recall election against Brian Shannon and Dave Brown may recall, one of the main justifications for the recalls against them was the claim they had broken public meeting laws by hiring Tyler Smith and firing Morelock. And yet, having all of your lawsuits’ claims dismissed without leave to refile the lawsuit again shows these claims made against them were false.

I believe it is possible that NEEd members knew their lawsuits were frivolous and filed them not because they believed they would win them, but because they wanted to claim in their recall campaign that because the Board Directors were subject to lawsuits that their guilt was certain, so NEEd could justify the recall elections and trick voters into supporting the recalls. Filing frivolous lawsuits started by your own group members and then having other members reference those lawsuits to claim the parties are automatically guilty is a common propaganda tactic used by Indivisible groups. This is one of the forms of paper terrorism they employ. Furthermore, NEEd members Brandy Penner, Ines Pena and Rebecca Piros frequently claimed that the other board directors were costing the district money with their “illegal” decisions when in fact the only group costing the district legal expense money was the one they belonged to.

I strongly believe the motivation of the recall campaigns had nothing to do with protecting students or because they sincerely believed that the Board directors had violated the law. Instead I believe NEEd organized the recalls solely because they had lost control over the Newberg Public School District in last year’s election when their members lost seats to Trevor DeHart and Renee Powell, and the recall campaigns were a desperate strategy to regain control over it once again so they could continue to indoctrinate students into fringe lunatic ideologies for the purpose of changing the voting “culture” of Newberg so the Yamhill County Democrats would win more elections.

In conclusion, the court decisions show there was no legitimate reason for the recalls filed against Brown and Shannon, and that NEEd / Progressive Yamhill completely wasted public money with the special recall elections they launched against them. Furthermore, the judgements also help illustrate how incompetent Brandy Penner, Rebeca Piros and Ines Pena were for constantly accusing their fellow Board members of violating public meeting laws during meetings. Even now, in her public comments about why she resigned from the board, Brandy Penner has continued to make public statements claiming the Board has violated laws when there is zero evidence for these claims she is making. In fact, this court judgement dismissing the lawsuit is evidence that she is wrong.

Wow! Excellent report. Thank you. Made my evening.