Newberg City Council candidate Casey Banks has been presented as a Christian pastor to appeal to conservative voters but she preaches while wearing gay pride flag themed clerical attire. 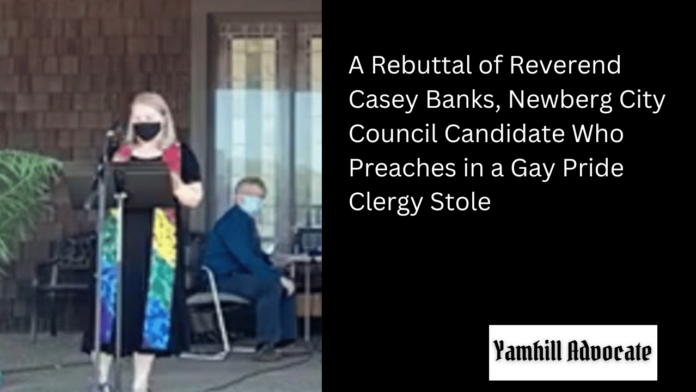 As mentioned in previous reporting, Casey Banks is a candidate running for election this month. She is endorsed by all the same groups that has endorsed other Progressive Yamhill activists, the same group responsible for the vast majority of so-called “social justice” activism in Yamhill County, which includes everything from organizing boycotts of private businesses to harassing public school officials to providing funding to Antifa groups.

This article will focus on the the actual religious beliefs of Casey Banks, which matters because she has used her status as a pastor in information that has been provided to voters, such as in the Voter Information included with ballots.

Banks has claimed she was “called by God” to become a preacher. This claim matters in a town like Newberg of primarily conservative Christians; her messaging in her campaign has been crafted in my opinion to make conservative Christians think she is one of them, but she is not and voters need to be aware of this.

This article features a theological debate and criticism of religious beliefs. While my criticism of Casey Banks may be fierce, it is not because I am venting personally held religious beliefs; I am not. What I am doing is challenging deception with truth. The things I am saying about Christianity are legitimate true statements that are wholly immune to a personal interpretation. I am quoting actual Bible passages as translated into English from their original ancient languages using the most accurate English translation, English Standard Version (produced in 2001 by a large interfaith team of specialists in these ancient languages who arrived at a consensus of what the original texts literally mean).

It is not my intention that anyone should act on the passages I cite. I am only pointing out that a homosexual lifestyle is wholly incompatible with the Christian teachings and to suggest otherwise is deception. I actually do not agree with the passages themselves and it is one of the reasons I am not a Christian. This should not be interpreted to mean I am anti-religion or anti-Christianity, as I am not. I believe there are many valuable things about Christianity and religion in general. But I do not agree with all of the teachings of Christianity and therefore cannot honestly be considered ‘Christian’, even if I do agree with the majority of its moral teachings. I think this is important to explain so people do not get the wrong idea about me.

What follows are a series of Facebook posts made in the reply to a post I made and shared that shows Casey Banks wearing a clergy stole featuring the gay pride flag colors in a video sermon that was uploaded to the Newberg First United Methodist Church page.

After this the thread was deleted.

Casey Banks then reached out to me via Facebook messenger and our debate continued.

I will end this editorial by saying once again I personally don’t agree with the passages I have quoted from the Bible and have only quoted them to prove that Christianity does condemn homosexual lifestyles and the LGBTQ social justice movement is therefore incompatible with Christianity. I will also point out the general consensus within Christian dogma is that the crucifixion of Jesus (regarded as the only human who abided by all of God’s commandments and was without sin) served as the last sacrificial offering and freed humanity from the curse of original sin, meaning many of the Old Testament demands God made were no longer required. This is explained in 1 Corinthians by Paul. It does not, however, mean God suddenly lost interest in humans engaging in behavior previously labeled wicked and immoral, thus the passages where Paul condemned sexual behavior such as homosexuality and expressly stated homosexuals cannot inherit the kingdom of Heaven.

If you cannot agree with the teachings of a religion then you should not claim to have been “called” by its deity to be a teacher of it nor claim you are accurately representing it and its just everybody else who is wrong because you believe you posses some secret, special knowledge no one else has yet cannot explain in a rational, coherent way within the framework of that religion’s teachings.

Kind of shameful when an atheist can crush an educated “pastor” on theology. I don’t have a clue why people claim Christianity but then believe/teach the opposite of about everything in the Bible. Seems like Buddhism or whatever would fit them better, something without a sovereign God anyway since they can’t handle real authority.