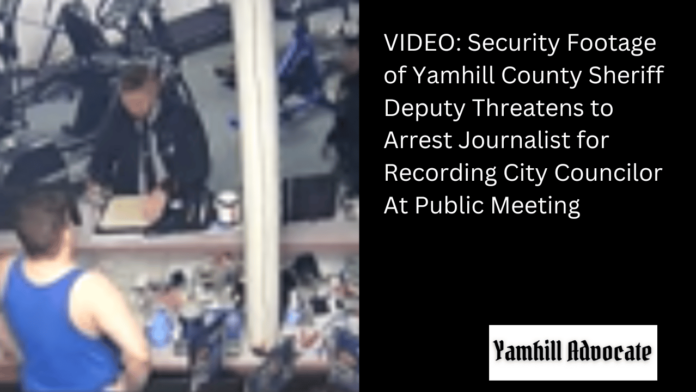 (If you would like to donate to my newspaper so I can continue bringing you investigative journalism please subscribe to my SubscribeStar page by clicking here. With more funding I can hire additional reporters and expose corruption faster.)

As I explained in the article, Newberg City Councilor Elise Hollamon Attempts to Censor This Newspaper With Frivolous Criminal Complaint, on December 1st deputies from Yamhill County Oregon told me I would be arrested by deputies from another County and charged with a Class A misdemeanor (the same class of crime as an assault or a DUI) because I published an audio recording of Hollamon admitting to me that she agrees Progressive Yamhill is an extension of the Yamhill County Democrat Party (which is important because I believe the YCDP is violating campaign finance laws by hiding their true spending through Progressive Yamhill’s activities). I was informed that Yamhill has a conflict of interest and so in a few days deputies would come and charge me. I asked for a copy of the charges but the deputy refused to provide them to me, instead all I received was a piece of paper with ORS 165.540 written out and section C highlighted in yellow marker. I was expressly told Elise Hollamon filed the complaint against me.

You can watch a video featuring the security footage from December 1st below. The audio quality is low but I have subtitled it based on what I hear and what I recall from the conversation.

Within an hour of emailing the Yamhill County Sheriff my response to the visit, Marion County Deputies arrived in a SUV at my place of business, a gym I own in Newberg, Oregon. Having no desire to speak with them and since they had not seen nor spoken to declare their intentions to me, I left the gym and then I left the state of Oregon within the next eight hours. So far my efforts to obtain a copy of the complaint and the charges against me from Yamhill County have been unsuccessful and I am operating on what I was told by deputies.

It is my belief the attempt to arrest me for my reporting is not coincidental; the article for which they are attempting to jail me was published over two months ago. After some thought I believe the real reason they are now trying to remove me from the board is because I recently made a number of public records requests for emails featuring the names of certain public officials related to a particular matter — the story published last week that exposed Democrat officials organizing harassment of a small business with the assistance of the ACLU, Oregon Wine industry and many others. While I have not yet had that request fulfilled, the reason I made that request is because of a number of emails I received that show how public officials and other major players of the Oregon Democrat party wield the full might of their power and influence to crush conservative dissidents who refuse to participate in their schemes.

It is my intention to combat the charges against me and I will probably also sue the Yamhill County Sheriff Office, Elise Hollamon and any other involved parties for infringing upon my constitutionally protected right to free speech. So far I have filed a complaint with the Yamhill County District Attorney’s Office against the Yamhill County Sheriff’s Office for infringing on my 1st amendment rights and for refusing to comply with Oregon public records request laws when I asked if they were the custodian of Elise Hollamon’s complaint and for a copy of it.

A copy of the complaint is as follows,

I want to file a complaint against the Yamhill County Sheriff Department for refusal to comply with Oregon public records law and attempting to violate my constitutionally protected 1st amendment rights.

It has been over 7 business days since I made a public record request to the Yamhill County Sheriff department and they have still not acknowledged whether they are custodians of the documents I requested related to an effort to arrest me for a falsely accused violation of ORS 165.540.

I just received a phone call from a detective at the Sheriff office who informed me that he will request a warrant for my arrest, which I believe proves that the Sheriff office is the custodian of the documents I requested and therefore the office has not complied with state public records request law to provide me notice within 5 days whether they were the custodian or not.

Furthermore it is my solemn belief the Yamhill County Sheriff department is violating my 1st amendment rights to record a public official at a public meeting where she was acting in her capacity as a public official, a meeting held in a public place (The Newberg High School auditorium for a town hall style meeting with herself and other public officials).

As I have explained to the Sheriff department and the detective directly, the U.S. Court of Appeals for the Ninth Circuit (which covers Oregon) has held that there is a First Amendment right to record matters of public interest in public places, which includes the right to record public officials engaged in the exercise of their official duties in public places. See case Askins v. Dep’t of Homeland Sec., 899 F.3d 1035, 1044 (9thCir. 2018); see also Fordyce v. City of Seattle, 55 F.3d 436 (9thCir. 1995).

Elise Hollamon is a Newberg City Councilor speaking at the panel in her capacity as a city councilor, about a program she wears multiple hats in as her privately operated nonprofit (Community Wellness Collective) is involved in the Wellness Center at the school which the panel was about. The CWC receives money from the City of Newberg and the Wellness Center which she co-operates via the CWC receives other public grant money. The panel was a public meeting, and her comments to me after the panel while the event was still taking place are specifically about her activities as a public official. .

I provided multiple statements to the Sheriff department, including the following one which I published on my newspaper in response to the complaint which clearly show the law has not been violated by me when facts of the situation are made clear.

It is my belief that Elise Hollamon and the Yamhill County Sheriff office are attempting to violate my 1st amendment rights as retaliation for the journalism work that I do and one of these ways is the refusal to comply with public records laws within the 5 day window time as well as the threats to arrest me for my journalism work.

probably won’t be able to get a warrant. any 90+ IQ judge will know we have a right to record public officials during public meetings etc. you have all kinds of things you can sue the Sheriff for.
Ms Hollamon should have known better as well. She should have consulted an attorney first. There’s trouble in this kind of thing. Not saying i want to see her in trouble , i don’t. But she shouldn’t have done this even if she doesn’t like your opinions in print.

Go to the FBI Civil Rights Division and write a complaint for title 18 u.s.c. Sections 241 & 242 violations
They probably won’t do anything but it may cause these clowns to think twice

Thank you for the suggestion.

Oregon allows for single person consent during telephone conversations, but requires dual party consent for in person conversations (this includes video). So if you were recording an in person conversation (even in a public forum) where you addressed the individual, and then they spoke directly to you or addressed your questions openly (even if they just said “no comment”) you’re technically in violation of the law. Some municipalities even break down town hall meetings (even those attended by the public or live streamed) as “privileged” and can only be recorded and produced by official means.

I did not break the law and even the District Attorney agreed.

I would say those municipalities are violating citizen’s first amendment rights and not complying with the law, and local residents should probably sue them.

Just checked Oregon public court records. All you have is a case from 2000 for no insurance, no “active” warants. I can say if they are “threatening” to arrest you, slap them with a restraining order from a state court before you do anything else. Let the dum dums marinate themselves in that for a bit, while at the same time you file a criminal complaint against the officers.

Where is the story and video posted about the city councilwoman who made the complaint? I guess the officer said it was posted in Facebook somewhere. I would like to see what she is complaining about.

These premeditated illegal contacts should not be taken lightly. When reading that this person went out of state i was relieved. This has to stopped. These intimidation tactics by any (false) authority must stop. We are calling out corruption watch out!

Your very brave, im proud of you

so do you think maybe some of the area lefty coalition are making up fake ” death threats” against the city councillor? for public manipulation or police purposes? if so it’s possibly illegal and definitely unethical of them all. It just seems like something they would do. they are full of schemes and tricks.