Newberg Public Schools students participate in a walkout that may have been organized by the teacher union as part of their political activism, in violation of numerous laws. 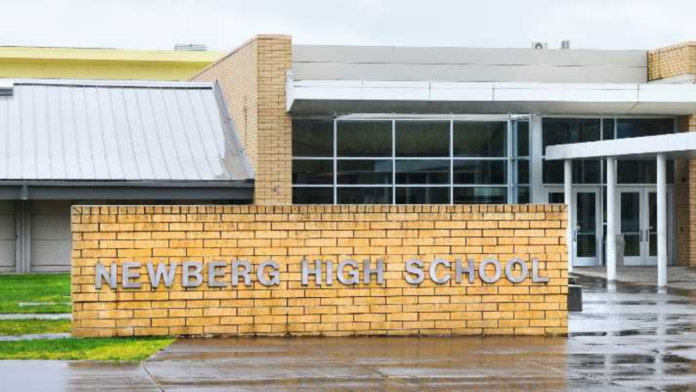 It seems there is never a dull day in Newberg, Oregon as political activism continues to take new strange twists and turns. Fortunately for the residents of Newberg, the Yamhill Advocate is here to help the community make sense of these situations, by shining the light of truth on those hiding in the darkness.

This supposedly student-led walkout in Newberg has echoes of Evergreen State College’s “Day of Absence” walkouts, where “white students” are bullied by social activists into not attending classes at school so that “BIPOC” students can have the full day to themselves, as part of Critical race theory (CRT) ideology designed to encourage racial segregation.

Newberg Communications Director Gregg Koskela is, by the way, a member of Newberg Equity in Education (NEEd), as I have previously reported on, whose mission statement is to introduce CRT in the Newberg school district.

(You can read the full mission statement of the Newberg Equity in Education group Koskela is a member of, by clicking here)

As many residents of Newberg are aware, Superintendent Joe Morelock was fired by the Newberg School Board and Assistant Superintendent Derek Brown has resigned; this means that Gregg Koskela has sole responsibility for deciding what posts are made to Newberg public schools Facebook pages, and what emails are being sent to parents by the district.

It seems clear to me that Koskela is using his position in the school district to promote his group’s social activist agenda as best he can.

There is Reason to Believe The Walkouts Are Not Student Led

Update: I have been informed by parents that students were provided professionally printed face masks to wear during the event, and to distribute these masks to other students as well. Clearly, there is some money behind this.

Furthermore, according to the social post made by Newberg Gay Straight Alliance Instagram account, the face masks were provided by the American Civil Liberties Union (ACLU), who has recently filed a lawsuit against the Newberg public school district,

I also find it noteworthy that the supposedly student led protest is using the hashtag #WeAreNewberg to advertise itself on social media, such as Facebook. Here are some examples,

However, by scrolling down the search page on Facebook for this hashtag, you can clearly see the hashtag was invented by Kristen Stoller, who has in the past used the #WeAreNewberg to advertise her private businesses.

Kristen Stoller is one of the main leaders of Newberg Equity in Education (NEEd), which Gregg Koskela and many school district employees are members of, including the teacher’s union leadership.

As I have reported in prior articles, Kristen Stoller is the co-founder and board director for the private medical clinic Community Wellness Collective that operates inside the Newberg High School, despite having no medical background whatsoever.

Additionally, as also reported in prior articles, during a meeting of the Yamhill County Democrat Party, Kristen Stoller stated the goal of their social activism in the schools is to indoctrinate the children in an effort to change the “voting culture” of Newberg once the student turn 18 and graduate,

This is the same Kristen Stoller who owns Chehalem Valley Dance Academy, where a current Newberg High School student performed a “drag queen” exotic dance performance in lingerie as members of Newberg Equity in Education threw dollars at him as part of a Recall Brian Shannon fundraiser.

Lastly, the Newberg Equity in Education (NEEd) group has long discussed using student to push their political campaign agendas, as I have previously published evidence for, in Meet the Newberg, Oregon Mafia Led by Elected Officials and Other Community Leaders, subsection Coercion of the students by the teacher’s union to participate in political activities during school hours.

As readers of the Advocate may recall, in August and September I gained access to their private Facebook groups used by Newberg Equity in Education and their parent group, Progressive Yamhill, to organize their political activism in Newberg, and published the following posts made by their members,

Consequently, I believe there is sufficient cause to conclude that this is yet another tactic by the Newberg Equity in Education (NEEd) group to use children to push their agenda and obscure their actual activities.

Involving Students In The Teacher’s Political Activism May be Illegal

I believe in addition to being extremely unethical for teachers to organize students into political activism campaigns that serve the agenda of the teacher’s union (as they are the ones pushing for the Recall of Brian Shannon and Dave Brown, as I previously exposed in the article, Newberg, Oregon School Board Recall Campaigns Defiantly Violate City and State Laws) it is illegal for the teachers to be doing this stuff in the school, during their work hours and in their official capacity as public school teachers with authority over the students.

Per ORS 260.432 Solicitation of public employees,

No public employee shall solicit any money, influence, service or other thing of value or otherwise promote or oppose any political committee or promote or oppose the nomination or election of a candidate, the gathering of signatures on an initiative, referendum or recall petition, the adoption of a measure or the recall of a public office holder while on the job during working hours. However, this section does not restrict the right of a public employee to express personal political views.

This of course is violated by the teacher union, using the NEEd group (that is both heavily intertwined with the Recall Brian Shannon PAC and the teacher’s union) to mobilize its member base and use their position of authority as public employees over school children. They use the kids as props in the political opposition to the school board via a political committee they have created, to oppose another political committee (the school board).

Now, I don’t know what is going on in the classroom but based on how these people behave online, I suspect they may be bullying kids into participating in the campaigning. If they are, the group is engaging in a violation of state coercion law,

(a) Unlawfully cause physical injury to some person;

(b) Unlawfully cause physical injury to some animal;

(c) Unlawfully cause damage to property;

(e) Falsely accuse some person of a crime or cause criminal charges to be instituted against the person;

(f) Cause or continue a strike, boycott or other collective action injurious to some person’s business, except that such a threat is not deemed coercive when the act or omission compelled is for the benefit of the group in whose interest the actor purports to act;

(g) Testify falsely or provide false information or withhold testimony or information with respect to another’s legal claim or defense; or

(h) Unlawfully use or abuse the person’s position as a public servant by performing some act within or related to official duties, or by failing or refusing to perform an official duty, in such manner as to affect some person adversely.

In addition to the organized intimidation and harassment of businesses that employ or have relations with the conservative majority school board officials, I believe there is also evidence that coercion is taking place against students.

This is because teachers are asking students to help the teacher union protest, up to and including asking them to speak to reporters. Because the teachers have an authority role over the students (they grade their papers, recommend them for special tasks, can burden them with chores and punishments, can give extra credit, etc) it is insanely unethical for teachers to be asking their students to participate in the union’s political activities.

In fact, I have seen evidence that members of NEEd believe any child who goes against their agenda should be bullied, under the guise of labeling these children “white supremacists”,

It is abundantly clear to me that the teachers are using their positions of authority to pressure students to participate in their political agenda, as I have seen numerous posts from within their Facebook group used to organize their activities,

I want to point out that Elaine Haworth Koskela is a teacher at the Catalyst High School. She is also married to Gregg Koskela, too.

As Elaine has stated in her messages within the NEEd group, she has to be “careful”, because what they are doing is probably illegal.

That members of NEEd are aware that manipulating students to serve their political agenda is something unethical and illegal is part of why I have made case that the teacher union has become a criminal enterprise. as I discussed in detail in the article Meet the Newberg, Oregon Mafia Led by Elected Officials and Other Community Leaders subsection, Why the Newberg Mafia is an Actual Mafia Per RICO.

In closure, I have some ideas for other trendy hashtags people can use to voice their opposition to the NEEd group when re-sharing this article,