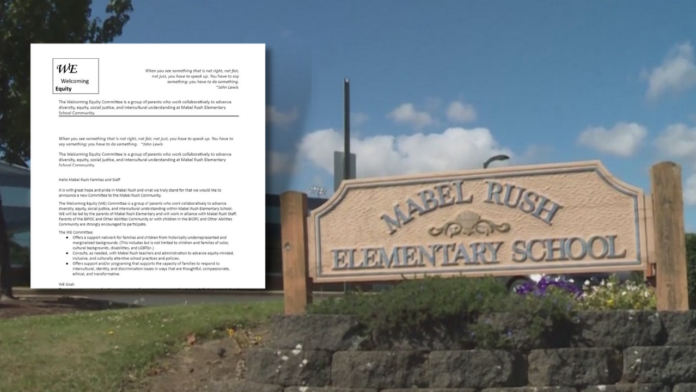 I have yet another update to the ongoing saga of the pro-Critical Race Theory activists in Newberg, Oregon that are indoctrinating the children of the public school district into their fringe ideologies.

On Tuesday December 7th, Mabel Rush Elementary Principal Tim Lauer sent the following email out to parents of Mabel Rush Elementary students. It advertises a “parent group” called the Welcoming Equity Committee. As readers of past Advocate articles will note, “Equity” is a codeword for racial segregation used by Critical Race Theorists to obscure their fringe ideologies and make it appear to be legitimate social activism.

One of the key giveaways that this is a pro-CRT agenda is the usage of the term “BIPOC” which is a phrase invented by CRT activists that means “Black, Indigenous and People of Color”.

Here is proof that Tim Lauer is the Mabel Rush Elementary School Principal from the Newberg public school directory,

Tim Lauer is also a member of Newberg Equity in Education (NEEd), too.

And here is the content of the “Welcoming Equity Committee” letter that Tim Lauer attached to his email to Mabel Rush parents,

The letter is full of CRT buzzwords and reads like the same kind of material the Newberg Equity in Education (NEEd) group frequently publishes, as I have reported in my past articles.

This “Welcoming Equity” committee appears to be yet another scheme by Newberg Equity in Education (NEEd) to trick parents into supporting their Critical race theory (CRT) agenda. Past activities of NEEd under the guise of “equity” has been the creation of a racially segregated student group, the “Black Student Union”, in violation of Supreme Court decision Brown V. The Board of Education that prohibits this kind of segregation in the public schools.

As well as the display of Black Power fists associated with Black separatist groups such as Black Lives Matter all over the Newberg schools,

Furthermore, as explained by Kristen Stoller, one of the leaders of Newberg Equity in Education, their activism in the schools has the objective of trying to change the “voting culture” of Newberg, after the kids they have indoctrinated in the schools turn 18 years old,

The Newberg Equity in Education (NEEd) group is also responsible for the recall elections against School Board directors Brian Shannon and Dave Brown, because they are trying to stop the group from continuing to use the schools to indoctrinate the children into these fringe ideologies.

More information about the Newberg Equity in Education (NEEd) group and their true goals can be read in the following past Advocate articles,