Progressive Yamhill is attempting to trick residents into supporting oppressive gun control laws in Oregon that will further their radical agenda. 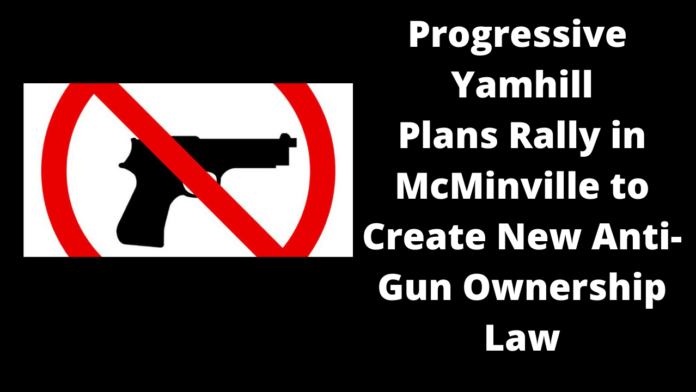 Progressive Yamhill is at it again. As previously reported, Progressive Yamhill is a registered chapter of Indivisible.org, a national group of extremists who provide support and funding to Antifa groups, and which organize many astroturfing campaigns to trick local residents into supporting fringe causes such as defunding police and closing prisons, indoctrinating children into sexual fetishes using public institutions such as schools and libraries, and who organize the harassment of any public officials who don’t align with their radical agendas.

Progressive Yamhill is responsible for organizing the recalls against Yamhill County Commissioner Lindsay Berschauer and Newberg School Board Directors Dave Brown and Brian Shannon. These failed recalls cost taxpayers over $300,000 from the budgets of the County and Newberg School District. Progressive Yamhill members are also responsible for numerous nonprofit groups, including Wine Country Pride that seeks to indoctrinate children into radical ideologies using the cover of LGBT activism.

Now, this Saturday Progressive Yamhill is attempting to use tragedies which happened in other states as a means to further destabilize our community and infringe on the rights of their neighbors.

On Saturday, Progressive Yamhill is holding an anti gun rally in McMinnville to gather signatures for Initiative Petition 17, which would implement the following restrictions to gun ownership in Oregon,

Similar laws have been passed in other states, including California, where many members of Progressive Yamhill have moved from to the Yamhill County area. These laws are notoriously used to allow anti-gun activists who work in state offices to prevent lawful gun ownership as a general policy; as an example, less than 1% of Californians are approved to have a concealed carry permit, with sheriffs having broad jurisdiction to deny granting the permits and so they are almost never issued to private citizens.

And yet, these oppressive laws are not effective at preventing gun violence. As demonstrated by California’s own statistics, these laws do not reduce gun violence, because gun violence is primarily caused by criminals who obtain firearms illegally with the assistance of criminal organizations such as the Mexican cartels and the gangs who distribute their black market goods for them. As an example, in Los Angeles alone during 2021 there were over 400 murders committed with firearms, as reported by the Los Angles Times article, ‘Gun Violence Nears 15 Year High‘; almost all of which were associated with gang activity.

The restrictive gun laws of states like California are actually used to prevent law abiding citizens from obtaining firearms to protect themselves from criminals, which is an infringement on their 2nd Amendment rights. This is why in every instance that these laws have been challenged, the US federal courts have overturned these laws, such as most recently happened last year when the courts overturned California’s attempt to prevent the lawful purchase of semi-automatic rifles.

The reality is that tragedies such as the one in Uvalde, Texas cannot be prevented with laws that infringe the 2nd Amendment. The shooter at Robb Elementary School was able to walk unrestricted onto the unguarded campus and enter the building via an unlocked door. Police who arrived on scene waited 78 minutes before attempting to breach the building. What led to the tragedy in Uvalde, Texas is that a public building where hundreds of people gather was not secured and responsibly protected.

The tragic reality is that some mentally ill people seek to vent their frustrations out on the young. There are massacres in every country that has public schooling; even in China, where firearm ownership is outlawed, there are massacres in schools attacked by mentally ill assailants wielding kitchen knives, machetes and knives. They are also attacked in other unguarded public areas people gather, such as subway stations.

There is no way to prevent these kinds of attacks from being planned and initiated by the criminally evil. The only thing that can be done is to implement good safeguard plans to protect places where the public gathers, and school buildings are one of these locations. Had there been an armed guard at Robb Elementary School this tragedy would have been preventable. Instead, there was no armed guard at the school and the local police were ordered by an incompetent police chief, Pete Arredondo, to not infiltrate the school which permitted the attacker to shoot at students and faculty for 78 minutes, because Arredondo mistakenly believed the attacker was using the students as hostages.

If Progressive Yamhill members actually cared about preventing school shootings they would endorse measures to provide MORE funding to police so that armed guards could be stationed at every school. Instead, they desire to eliminate police forces and close down prisons and they provide funding to ultra-violent Antifa groups who attack law enforcement officers. They then try to support measures like Initiative Petition 17 that seek to prevent law abiding citizens from having even so much as a hunting rifle to protect themselves from criminals who do not follow the laws.

These extremists do not care about children and making anyone safe. They only care about how they can destabilize our communities to cause the collapse of our country, because they believe this will somehow lead to a utopia when the country is dismantled and “rebuilt”. Their true cause is to serve the agenda of Critical Race Theory activism and everything they do is in service to this agenda. Don’t be deceived. It is disgusting they would attempt to use a genuine tragedy that took place in another community to drum up support for their anti-American activities.

A license is something you have to apply for, and invariably, to pay an application fee for. Also, an application could be denied. The Second Amendment is the only “license” I need, as an American, to keep and bear arms. The truth is, at age 63, I already have all the firearms I’ve ever wanted, and so I don’t plan on buying any more, but I will be keeping every single one I have. They are protected by the Second Amendment, and (as “property”), also by the 4th and 5th Amendment, and (according to the Supreme Court McDonald (2010) decision) by the 14th Amendment. McDonald incorporates the 2nd Amendment into the 14th, which means the States must also respect (obey) the 2nd, not just the federal government.