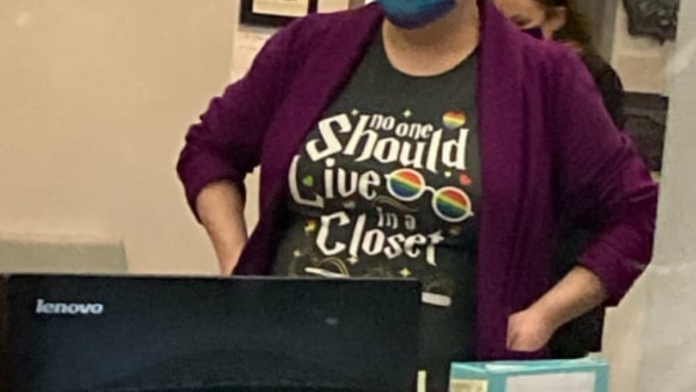 Since the publication of my last article, Newberg, Oregon Parents Speak About The Toxic Environment Created by Teachers In the Public Schools, more parents of children attending school in the Newberg, Oregon district have sent me additional stories and information.

One of these stories pertains to Madeline Kozloff, a School Counselor at Chehalam Valley Middle School, who frequently wears a t-shirt that says, “No One Should Live in a Closet” while meeting with students for counseling, and also while acting as a substitute teacher.

The following is a photo of Kozloff in a Chehalem Valley Middle School classroom wearing the shirt in question, which I am told she frequently wears to school,

Kozloff also wears the ‘Better Together’ t-shirt, which as I previously reported in the article, What The ‘Better Together’ Campaign By Newberg Equity in Education Actually Means, is an attempt by the Newberg teacher union to skirt around the rules of the politically divisive symbols ban so they can continue to indoctrinate children into the discredited, fringe gender identity theories of John Money.

From what I have been told by concerned parents, Kozloff frequently wears these shirts to school and uses her position to pressure kids, encouraging them to explore romantic relationships with kids of both genders to discover if they are gay or not.

Is this the kind of behavior that a public school counselor should be engaging in?

Also, as I have previously reported in my other articles, Chehalam Valley Middle School currently has black power fist posters and pride flag posters all over the hallways and classrooms, and the principal of the school has refused to order these signs to be removed, as I reported in Newberg School Principal Casey Petrie Refuses to Remove BLM Flags as Violent Protests Erupt Nationwide and Newberg, Oregon School Board Recall Campaigns Defiantly Violate City and State Laws,

As an example, these are some of the propaganda posters from inside the school, with the name of the teacher union, Newberg Education Association, clearly displayed on the posters.

Many people have often tried to obscure the goals of the LGBTQ social activism in the schools by claiming that homosexuality is something a person is “born” as, but there is no scientific evidence for this belief that homosexuality has a genetic link.

Instead, the ideas of John Money, who believed a child could be culturally conditioned to identify as the opposite sex and adopt the corresponding sexual orientation, is what has become the mainstream viewpoint on the subject of the nature vs nurture debate regarding homosexuality, which is why his theories are the ones used to form curriculum for teaching these topics to children, as I previously discussed in my article, Newberg Schools Indoctrinate Children Into Pseudoscience Designed to Change Children’s Sexual Identity.

I really want to drive this point home for people on what is transpiring in our schools and how open the people supporting the indoctrination of children into these fringe ideologies are about their agenda.

Several weeks ago, there was a comment made into a Facebook group, which was deleted but I want everyone to see, so they really understand this is a cult that is replacing people’s religious beliefs with the ideology of the cult. While many of them are self-aware enough to understand admitting these things in public makes them look bad, if you get them riled up enough, they’ll start speaking the way they do behind closed doors.

As you can see, Derek Gitts equated children going to church with indoctrination into fringe gender ideologies.

Here is the video in question, so you can watch it yourself,

This video is part of the health class curriculum currently being taught in the Newberg public school district, as I have previously reported.

Here is what remains of the user comments to the Facebook group discussion thread. You will see my own comments made in response to others as well.

You should know that many of the people posting in support of this video are members of Newberg Equity in Education, as I have shown with evidence in my prior articles.

As you can see, there are quite a number people in Newberg who have been fully indoctrinated into the fringe pseudo-science of John Money. They ignore biology and they ignore science, choosing instead for a cult belief that depends entirely on motivated reasoning.

To be clear, I would much rather be focusing on my other creative projects than having to go back and forth with people in the cult that are seeking to exploit children for political gain, as explained by Kristen Stoller during a Yamhill County Democrats meeting, because they feel the indoctrination will result in changing the “voting culture” of Newberg once the kids grow up,

The reason why I am writing the Yamhill Advocate articles is because someone has to do it.

The average person is not aware of their Orwellian double-speak terminologies, and is not informed about philosophy, history, abnormal psychology, law and so on, to the degree that is necessary to untangle the web of lies this cult has created to ensnare so many people.

While I doubt I am the only person in all of Yamhill County who has the knowledge and skills to do this reporting, I am one of the few willing to spend the time to do it.

Someone has to and I decided to be that someone.

More information about what is taking place can be read in the follow article,

I would rather look at a rainbow then her face. But one good thing about these symbols is it let’s us all know who they are. She should stay in Tigard with her hate.

This is crazy!! Are you wearing your tinfoil hat too? Asking for a friend. You are completely out of touch with reality and it is quite fascinating that you speak of yourself as your towns savior, as if you were like christ himself. Just wow!

Okay, “Simon”. And which member of NEEd are you really?

Well that was a easy trigger ?, listen to what you said, and your NEEd terror group. They are pushing a way of thinking on youngsters who are easily influenced, as if they know what’s best for anyone. Looking at thier own stats they quote, they should be steering kids away from the alphabet lifestyle at all costs.