Yamhill Advocate editor Carey Martell challenges News-Register publisher Jeb Bladine to provide evidence for the claims he has made about Commissioner Lindsay Berschauer. 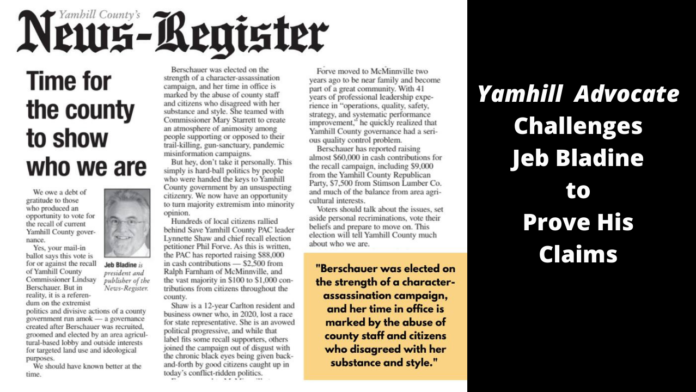 It has come to my attention that Jeb Bladine, the publisher of Oregon Lithoprint Inc DBA News-Register has authored an editorial in the latest edition of his newspaper where he has repeated the propaganda of Save Yamhill County PAC that is responsible for the recall against Yamhill County Commissioner Lindsay Berschauer.

In fact, in prior articles such as Meet the Newberg, Oregon Mafia Led by Elected Officials and Other Community Leaders and Part 2: Meet Progressive Yamhill, the Parent Group of the NEEd Mafia Seizing Control of the County I provided hundreds of screenshots from within the Indivisible chapter’s private Facebook groups that demonstrate violations of public meeting laws, violations of the Hatch Act, violations of numerous state laws, harassment of both private citizens and elected officials, and so much more. In my opinion, the group is a conspiracy that has even violated the Racketeer Influenced and Corrupt Organizations Act (RICO) of 1970, which makes them a kind of mafia.

I have shown proof that Progressive Yamhill has, via its members who are elected officials, engaged in cronyism and committee packing, never disclosing to citizens that they are appointing their own membership to key positions such as vacant city council positions and committee seats. Progressive Yamhill members who are elected officials, such as those in the City of Newberg, even gift their fellow members with grant money without disclosing these close ties to the general public.

I have shown proof that Yamhill County Commissioner Casey Kulla is a member of Progressive Yamhill and has frequently turned his decision making over to this special interest activist group.

I have shown proof that Progressive Yamhill members, such as Kristen Stoller, and numerous teachers, exploit the public school system and their private businesses that cater to children, to groom those children in their extremist ideologies with the goal of changing the voting culture of our communities once those children turn of age. I have even shown how Progressive Yamhill members and their sympathizers are in our public libraries, providing hardcore pornography to children alongside other books designed to introduce them to fringe lifestyles and sexual fetishes.

Many people have heard about how three Newberg public school employees spent their work hours producing Tik Tok videos, and two of them were exposed flipping the bird to those who believe pride flags shouldn’t be in public schools. The Yamhill Advocate was the first newspaper to break the story and has been cited by other publications such as KOIN 6 in their coverage of the story. And two of those three employees are confirmed members of Progressive Yamhill via its subgroup, Newberg Equity in Education.

I have even shown Progressive Yamhill members’ connections to violent extremist groups such as Antifa.

Unlike the News-Register that does not provide evidence for its claims, Yamhill Advocate‘s editorial style shows readers the evidence for all claims made against parties, and allows readers to decide for themselves if my reporting is credible and accurate. News-Register instead makes its claims and expects its readers to simply believe those claims at face value due to the perceived credibility of its legacy.

There are mountains of evidence that Progressive Yamhill has cost tax payers in Yamhill County nearly $200,000 from the budgets of public institutions (such as the Newberg school district and the county government) by creating these unnecessary recall campaigns. I have proven with their own internal communications that their members’ motivations are nothing more than to re-gain control over seats of government that their cabal lost control over in the 2020-21 election cycle.

I have shown their accusations against Commissioner Berschauer, Newberg school board directors Brown and Shannon, and numerous others, are outrageous lies. I have also shown that when challenged on these lies they are never able to back up their accusations with proof.

I believe that News-Register staff are aware of these facts, and they ignore them. Even Ossie Bladine (who is the editor of the newspaper) and I have had several public exchanges over Facebook about my reporting. Bladine arrogantly claims the Yamhill Advocate is not a genuine newspaper, and he dismisses the evidence I print, refusing to tell the truth to News-Register readership when he writes about the activities of Indivisible front groups, such as Save Yamhill County PAC.

Meanwhile, his father Jeb Bladine provides no evidence for the accusations he makes against Commissioner Lindsay Berschauer and her politically moderate support base. Instead, Bladine uses the perceived credibility of his newspaper to parrot the talking points created by the real extremists in our community, Progressive Yamhill.

And so, I throw down my gauntlet;

I challenge Jeb Bladine to provide evidence for the claims he has made about Commissioner Lindsay Berschauer.

Provide the evidence, or admit you have none and resign as publisher.

I believe that neither Jeb Bladine nor anyone else at the News Register will be able to provide evidence, because there is no evidence for the claims he has made. It is nothing more than the fabrications of the Indivisible group he has thrown the full weight of his newspaper behind to support.

If Jeb Bladine and the News-Register refuse to respond to my challenge to provide evidence for the claims against Commissioner Lindsay Berschauer, I would ask readers who still do business with the Bladine family enterprises if they wish to continue subsidizing the cost of printing the baseless claims of the News-Register. Your money may be better spent elsewhere than on the distribution of propaganda.

..The News Register is just perfect to line the bottom of my kitty litter box..They wont step up to the plate and provide actual evidence, because they have none..But you can be sure that the liberial hypocrites will rally behind their favorite lying rag..

Blandines editorial is name calling and innuendo but no specific reasons to recall Berschauer. He includes some meaningless info about Phil Fovre and how much money the two campaigns have raised but it is like ‘filler’ to fluff out a pitiful piece of non-jounalism.

Its interesting to me to see how the reasons cited for a recall have shifted over time as the Progressives scramble to find issues that have traction with voters. Remember the focus used to be: The Trail cancellation, the purported $2.5M giveaway, and her secret political consulting. More recently it has shifted to; “Lindsay is a bully”. I believe people will make the right choice.

Jeb and the NEWS RESISTER, are hard to tell apart from the garbage graphic. Pathetic misinformation outlets.

On the Level
Guest

Ossie Bladine has been a little sketchy from day one. He was working on some liberal rag in Vancouver subsidized by the family and later got Daddys job at the News register over some better qualified people. Jeb is never to be questioned or criticized especially in public. Good reporting Carey! Keep moving forward and the truth will set us free.